Don and Karla Hamon travel the country on two wheels, advocating for cruelty-free food systems, and living without regrets

When Karla Schultz first met Don Hamon in 2013, she had no idea that her life was about to take two major turns. First, she never envisioned herself on the back of a motorcycle—let alone traveling 81,000 miles over the course of five summers. Secondly, being an omnivore, she couldn't have imagined the impact that Hamon's belief system would have on her own eating habits. Nowadays, Schultz is one half of 2 Vegans 2 Wheels, a pair of vegan motorcyclists who travel the world while spreading their message. 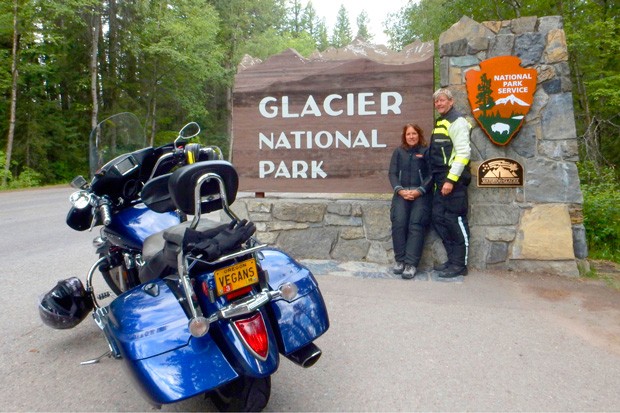 And no, the message isn't, "Stop eating meat," although Schultz did joke about her now-husband "preaching" that very message when they first met.

"He started preaching... and it worked," she laughed. Why veganism? While attending a food festival in 1985, Hamon experienced an epiphany. "There was this booth, it had some information on factory farming," he explained. "It changed my outlook completely." For Harmon, committing to a life-long plant-based diet was just that easy. Apparently, however, being a vegan in '85 was nowhere near as mainstream as it is today. "Being vegan was weird 35 years ago," Hamon said with a smile. "Now, there are so many vegan-specific eateries in Bend. It's almost like I'm... becoming normal." Compared to some places, Bend is food-progressive. It isn't always so easy to find vegan-friendly food on the road, especially in small-town America. In many cases, the pair will have to find a grocery store and survive off of veggies and hummus – sometimes for days.

Veganism is an important part of their lives, and living cruelty-free is a message they're compelled to share. However, the real message they've been working hard to spread is that of living—encouraging those they meet to start living without regret and living today, because life is both short and uncertain.

Since the two later-life-lovers starting taking motorcycle trips in 2014, they've traversed more than 22 national parks throughout the U.S. (and four in Canada). Their journeys have taught them vital lessons about life, love and the human race. They explained that traveling through rural areas in more conservative states was always interesting.

"I think the biggest takeaway I've gotten from all this mostly rural travel is the fact that people are nice. Politics have drawn us into artificial groups, but at their hearts, most people are genuinely kind. People may make faces at our 'vegan' license plate or the huge sign on our bike, but if you need help, almost everyone is there for you."

“No matter how or where you find your happy place, just go. No one on their deathbed ever says, ‘I wish I spent more time working.’”—Don Hamon tweet this

They've also learned the importance of flexibility. "Nothing goes as planned. If you're rigid in your thought—if you can't adapt—you'll never have fun." The couple shared stories of hail storms, sweltering heat and getting lost on unfamiliar back roads in the middle of the night. Despite adverse circumstances, they affirm that the journey is always just as life-changing as arriving at the destination—and in many cases, even more so.

Finally, the two travelers have learned what matters most certainly isn't stuff. Self-proclaimed minimalists, they share one single bag when adventuring. They do laundry once a week or so, and only pack the essentials—such as Keen sandals, a Hydroflask, Tofurkey and Kettle Chips. They also bring along a camera, a tripod, a drone, a laptop and two GoPros to document their cross-country voyages. What matters most to the pair is the experiences they share—dancing to their favorite songs in the middle of the road, or on top of a mountain or wherever else they find themselves. Accidentally becoming a part of a small-town 4th of July parade. Stumbling across a delicious vegan meal in a village in the middle of nowhere.

Today, Hamon works as the Safety Director for Hooker Creek, and his wife, a retired Spanish teacher, volunteers at numerous local organizations, including Harmony Farm Sanctuary, a 10-acre plot of land housing animals that were either abused or abandoned.

Hamon is also a huge advocate of playing it safe. As a part of the Governor's Advisory Committee on Motorcycle Safety, he gets to see every Oregon accident report, and he's accumulated a wealth of knowledge pertaining to do's and don'ts. He shares his knowledge with other motorcyclists, both amateurs and seasoned vets, on his comprehensive website—which also details the couple's incredible expeditions.

"The love for all living creatures is the most noble attribute of man."
-Charles Darwin

Learn more about Don and Karla Hamon at:
2vegans2wheels.com