Bingeworthy: 'Tiger King' is the Other Thing Everyone is Talking About | TV, Streaming & Podcasts | Bend | The Source Weekly - Bend, Oregon

Bingeworthy: 'Tiger King' is the Other Thing Everyone is Talking About

Go one minute into the opening credits and you'll see why this is the #1 title in the U.S.

April 02, 2020
1 comment
It's the other thing that everyone is talking about lately. Out of nowhere, I kept seeing memes about a gaudily dressed man who made some interesting choices with his hair.

I was getting introduced to Joe Exotic. 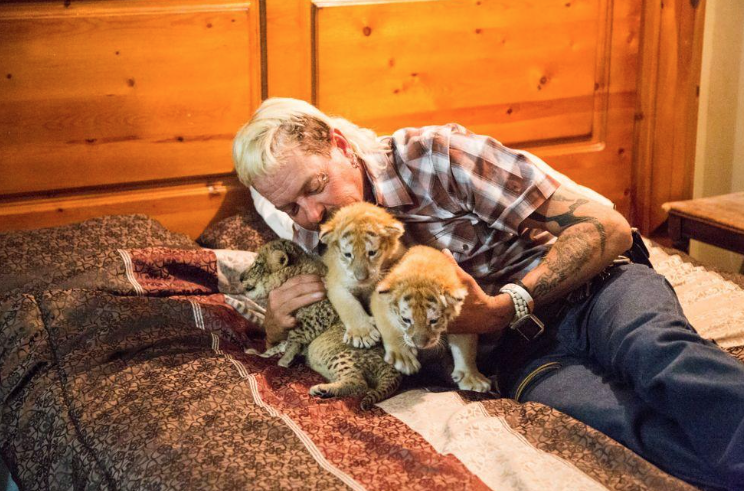 Exotic is the titular subject of the new limited, wonderfully addictive Netflix docu-series, "Tiger King." The series is subtitled "Murder, Mayhem, and Madness," a line that's arguably misleading, albeit alliterative.

Just try going one minute into the opening credits and you'll see why this was the #1 title in the U.S. This series is hewn from pure voyeuristic gold. Joe Exotic is an ascended master of reality TV. He has seemingly lived his life in order to be noticed. A mulleted, gay, gun-toating owner of more than 100 big cats, Exotic is a potential television goldmine.

Born Joseph Schreibvogel, Joe Maldonado-Passage was better known to the Oklahoma region as Joe Exotic. Founder of the Greater Wynnewood Exotic Animal Park, generally referred to as the GW Zoo. The attraction was famous for letting guests interact with tiger cubs and other young big cats, often taking their show on the road to malls and other locations, with celebrity guests like Shaquille O'Neal. As the episode continues, we're taken further into the curiously dangerous subculture of exotic animal collectors.

The show quickly shows its hand. Each episode opens with audio from a collect call from prison, a la Adnan Syed's in "Serial." Exotic is in prison and the show doesn't hide the fact that this has to do with him hiring someone to kill fellow wildlife enthusiast Carole Baskin.

The first episode sets the scene, and mostly concentrates on character shading for Exotic and, to a lesser extent, Baskin. Founder of the organization Big Cat Rescue, Baskin was subject to a very public feud with Exotic, which eventually escalated to threats of murder.


The allure of tiger cubs and other big cats has an astounding effect on people. With tactics eerily similar to religious cults, animal owners barely have to persuade down-on-their-luck devotees to work for little wages under poor conditions. click to tweet

The second episode begins by focusing on Mario Tabraue, who also had an extensive collection of big cats. Supposedly one of the inspirations for Al Pacino's Scarface, Tabraue is a Cuban-American who served 12 years for drug smuggling and possession. Ultimately, Tabraue's thread is quickly dropped by the series, as despite his fascinating story, he takes little part in the further narrative. This episode's main character is Bhagavan "Doc" Antle, who owns a 50-acre wildlife preserve located in South Carolina, The Institute for Greatly Endangered and Rare Species (T.I.G.E.R.S.). In addition to having an extensive collection o big cats and a penchant for eastern religions, Antle practices a form of polygamy, something that Exotic notably does as well.

The allure of tiger cubs and other big cats has an astounding effect on people. With tactics eerily similar to religious cults, animal owners barely have to persuade down-on-their-luck devotees to work for little wages under poor conditions. They do so happily, for the unique chance to be around animals like these, with owners able to parlay this attraction into huge profits, multiple sexual encounters, and social access. The series goes continually darker, dealing with the mysterious disappearance of Baskin's husband, multimillionaire Don Lewis. There are copyright lawsuits, suspected arsons, lost limbs, tragic deaths, presidential runs, methamphetamine use, gubernatorial runs, swingers in Affliction shirts, and ultimately involvement by the federal government.

In the end, I felt sorry for Exotic, and I doubt I'm the only one. The documentary shows him as a complicated and conflicted person—one who is currently serving a 22-year sentence in prison.

People are magnetically drawn to tigers and other big cats. The final title card notes that there are between 5,000 and 10,000 captive tigers in the U.S. and only 4,000 in the wild. If nothing else, this remarkable series might be a wake-up call to provide better lives for these fascinating creatures.

The seven-episode series is currently available for streaming for Netflix members.

It was recently announced the there is another television series in the works from Universal Content Productions starring Saturday Night Live's Kate McKinnon as Carole Baskin.

This story originally appeared in the Erie Reader, our newsweekly counterpart in  Pennsylvania. Nick Warren started this series and walked downstairs to find his parents had started it almost simultaneously. He viewed the seven episodes in a single day. He can be reached at nick@eriereader.com.