Birds, Bees and Wildflowers—Oh My!

On July 6, the Sunriver Nature Center will host the 30th Central Oregon Wildflower Show—but this time, the focus is not just on the flowers, but also on the pollinators that help them along. 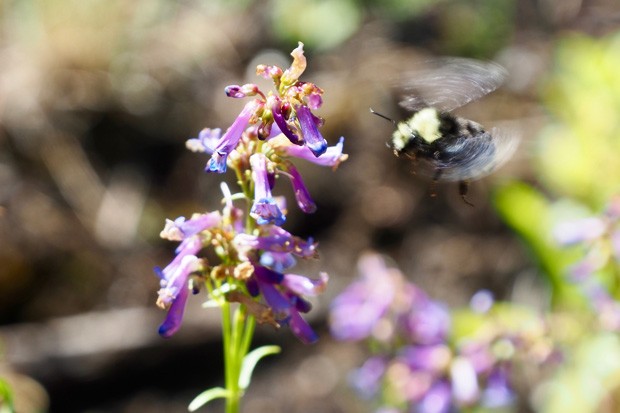 Amanda Accamando, Sunriver Nature Center & Observatory nature center manager, says this is the first year the show will feature pollinators—the bees and hummingbirds that help spread pollen from flower to flower. Accamando, who's been with the nonprofit for the past two years, said her degree in plant-insect interactions is partially why pollinators are now part of the event.

Accamando said she started keeping bees when she lived in Denver, Colorado Her interest in apiaries carried over when she moved to Central Oregon. Accamando now keeps hives at a small farm in Redmond.

This year, attendees of the festival can do botanic garden walks where they can watch hummingbirds feeding on wildflowers and taste local honey. Accamando said the show will also feature beekeeping demonstrations, and people can even participate in catch-and-release bee walks. That's all in addition to seeing the hundreds of native wildflowers traditionally on display at the show.

“The European honeybee is one of the few insects that stays active all winter long, and that’s why they build the honey.”—Amanda Accamando tweet this

Honey in Oregon comes from the European honeybee, which was brought by European settlers to the U.S. in the 1620s, according to the Oregon Department of Agriculture. Prized for honey production, the bees have large, perennial colonies that can easily be transported, and they can pollinate many different crops. For that reason, they're the most widely used pollinator in the world, according to the ODA.

Inside the Sunriver Nature Center, visitors can also see a working hive. The queen is distinguished by a small, green dot on her back. Accamando said the hive is active year round—and even survived the past winter when snow covered the outlet pipe.

"The European honeybee is one of the few insects that stays active all winter long, and that's why they build the honey," Accamando said.

Although honeybees get most of the attention—except for maybe yellow jackets, which Accamando believes give bees a bad name—there are about 4,000 species of native bees in the U.S. In Oregon, there are many different species of bumblebees—big, furry bees that often have a yellow head and black body. Most native bees in Oregon are solitary, meaning only a single female builds the nest—often in the ground—and lays eggs. Accamando said most of the native bees hibernate in the winter—both adults and larvae—and come out in the following spring when the weather warms.

Accamando and I walked a bare section of dirt next to the Nature Center, looking for tiny holes in the ground where a female bee would be working on a nest. We spotted one and got to observe a small bee digging furiously at the dirt, making a hole about the size of a pencil eraser while digging out its nest.

Accamando said she's been stung by bees, but she's trying to educate people on bee behavior.

"Everybody's had a run-in with bees," Accamando said. "And we try to get people to better understand why bees are doing that—you know, the ecology and the evolutionary advantage of stinging and protecting your queen, and why that's evolved that way, so we try to provide context for it."

The one-day event, that partners with the High Desert Chapter of the Native Plant Society, will still have wildflower displays, flowers for sale and children's activities, like in prior years—in addition to the pollinator-centric events. Cost of the event is $10 for adults and $5 for kids age 4 to 12. The admission fee will allow visitors access to all of the Nature Center—where people can see raptors, swans, a golden eagle and reptiles—as well as the Observatory.

"We're really excited to celebrate this garden because our owls and snakes often get the attention, so it'll be really nice to celebrate the bees and the flowers," Accamando said.