Birds of Lake Abert (and the fun of getting there) | Natural World | Bend | The Source Weekly - Bend, Oregon

Birds of Lake Abert (and the fun of getting there) 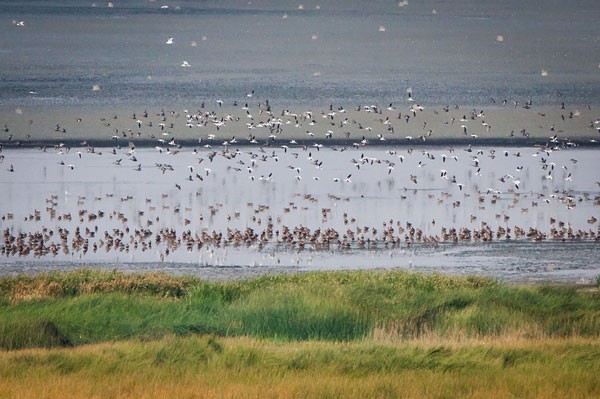 lot of readers have asked me why I spend so much time in, and talking about, the wilds of interior Oregon. Two very important reasons: 1. Golden Eagles nest and feed in that neck of the woods, and 2. I love it out there.

For about nine out out of 10 Oregon residents, Lake Abert is the name of a place they have never heard of. Truly, it is really one of Oregon's best kept secrets.

So, let me tell you what I know about this sprawling body of water almost smack-dab-in-the-middle of Oregon's Sagebrush Sea. To begin with, it's a salt lake. Yep, just like Great Salt Lake, but a lot smaller. You can gaze upon it by filling up the tank of your family buggy and either driving south on Hwy. 97 from Bend—or by going east from Bend on Hwy 20, turning south on Hwy. 395 at Riley.

Let's take the Hwy. 97 route first. When you get just past La Pine, go southeast on Hwy. 31. Fort Rock and the surrounding countryside occupy a role in the rich history of Oregon's native peoples, very similar to that of Ayers Rock—a huge sandstone upheaval in Central Australia also known as Uluru, a sacred place to the aboriginal people.

There's a cave in a part of the formations there that make up the Fort Rock Valley, where scientist have dug up evidence that people lived along the shores of ancient Fort Rock Lake over 11,000 years ago. There are also lots of birds there. There's also a story about an old buckaroo who lived at Fort Rock all his life. When he passed out among the stars his body was buried at Fort Rock (where I'll be set down alongside him one of these days). It's said that when the old buckaroo walked up to Heaven's Gate, St. Peter saw him coming and said, "Howdy stranger, welcome to heaven."

The buckaroo answered: "Howdy, Pete, I'm recent dead and would like to come into heaven and look around, if that's OK."

"Where ya' from?" Peter asked.

"Well," St. Peter said, shaking his head, "You can come on in if you want to, but this place ain't near as pretty as Fort Rock."

On the way down Hwy. 31, you'll pass Summer Lake Wildlife Management Area, where a lot of people go fall duck hunting. Right now it's full of white-faced ibis and many colorful shorebirds. When you pull into the campground you'll see a big momma great horned owl waiting to greet you—but don't worry, she won't bother you; she doesn't give a hoot.

After you go through Paisley you'll cross the Chewaucan River a couple times. It may not look like much, but that beautiful river is the lifeblood of Lake Abert. Without it, millions of birds would not stop to refuel on brine shrimp, brine flies and other invertebrates that give them the energy to migrate south thousands of miles each winter.

I suggest stopping to gas up at Valley Falls Junction. Look at the beautiful woodcarvings in the store, buy an ice cream cone and then go back up north on Hwy. 395 toward Lake Abert.

About 4 miles up the road there's a dam that stops the Chewaucan River from entering Abert basin until it fills a lake behind the dam. During dry times this dam unfortunately cuts off the water that keeps Lake Abert alive, which put an end to a small brine shrimp fishery that operated on the lake for several years, and also destroys the biology of the lake that keeps it alive for millions of shorebirds.

The old adage, "You can't miss it!" rings true for Abert Lake. It takes up the whole northwestern horizon within 5 miles of turning north on Hwy. 395. If you keep going north another 3 miles you'll find a viewpoint on the west side of the highway with an interpretive sign describing the history of the lake, as well as a rough little road going to the lake.

Thanks to last winter's marvelous snow, the lake is almost full this year. Brine shrimp and brine flies have recovered and millions of birds migrating through on their way to South America again have food to fuel them on their arduous flight.

n this scenic route, you'll go past our newest desert preserve, one that the Oregon Natural Desert Association had a big hand in creating: Oregon Badlands Wildness. Just past that you'll enter the remains of an ancient volcanic caldera as you drive up and over Horse Ridge.

As you roll down the east side of Horse Ridge you'll see Pine Mountain on your right, with its astronomical observatory. Refuel at Riley and stop and say hello to the owners, Pat and Dale. Grab up your coffee, ice cream or sandwiches, and head south on Hwy. 395. This is a geological tour that's one of the best in the west, so bring along your copy of Marli B. Miller's "Roadside Geology of Oregon."

After you go through Wagontire, a ghost town with the population of two, you'll go past Alkali Lake, the scene of one of the worst—and most unknown—ecological tragedies in Oregon. Well, no, maybe second worst. The ongoing ramifications of the atomic waste on the north side of the Columbia River that casts its dark shadow over Oregon may turn out to be the worst... but Alkali Lake comes in a close second.

There are—buried under the surface of Alkali Lake, out of site and out of mind—over 25,000 drums, with kerjillions of gallons of unknown chemicals in them. (That's the Oregon Department of Environmental Quality's method of solving the problem.) They're waiting like a ticking time bomb for when they'll they rust away and eventually begin seeping their horrifying contents into someone's water supply, out there among the beautiful forgotten real estate of Oregon. This is all thanks to the chemical companies of Portland that paid someone to drop and leave the mess in that beautiful part of Lake County.

When you get to Buckaroo Lake and take in that geology, it'll knock your socks off. You'll get your first look at Lake Abert as you go over Hog Back Summit. There's a county road to the right just below the grade that goes cross-country to Summer Lake, providing another vista of Oregon you'll never forget. While all along the stretch of Hwy. 395 that runs past the east shore of Lake Abert there are birding pull-outs, most are at the north end of guard rails on the edge of the highway.

Set up your scope and slowly inspect the water and shoreline. The large patches of white spots you can see on the open water are various gulls resting on the surface of the lake and tanking up on the invertebrates. All along the shoreline you'll see thousands of phalaropes, avocets, stilts and small "peeps," tiny shorebirds. Each pullout will bring additional species into view, including waterfowl, like the 6,000 or so Shoveler ducks Sue and I got to see when we went there with retired Crook County biology teacher and Master Birder Chuck Gates of Powell Butte.

Here's Chuck's list of bird records we came home with. You can do that, too, and if you see something that grabs you, please don't keep it to yourself. Send me an email and we'll share it with others on Birder's Night held at the Bend Environmental Center every third Thursday at 7pm. Happy birding!

Now you know just a little of why Sue and I love that part of Oregon.