The first horror movie that comes out every year is always pretty bad. "The Bye Bye Man," "Underworld: Blood Wars," "The Forest" and "The Devil Inside" are just a few of the January dumping ground flicks we've been exposed to over the last few years—none of which were even really worthy of a theatrical release in the first place. 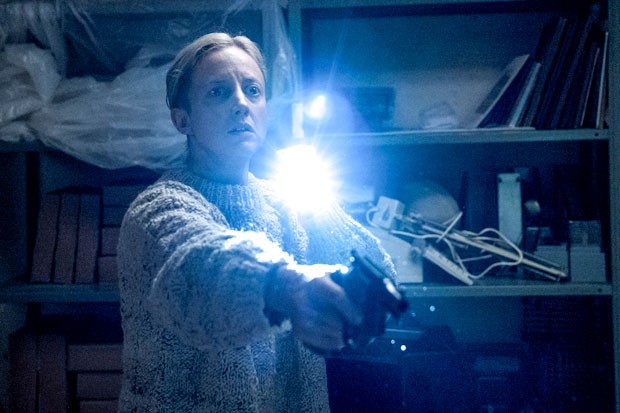 I've been unreasonably excited for the new "Grudge" movie because of the talent involved, even knowing it had a disastrous January release date. It's that feeling where you're reaching your hand into a garbage disposal, knowing something squishy and awful might be in there, but also just hoping for the best (even though the best is still gonna be partially blended garbage).

"The Grudge" has a cast featuring "Mandy's" Andrea Riseborough, John Cho, "Weeds'" Demián Bichir, "GLOW's" Betty Gilpin, Oscar nominee Jacki Weaver and horror/comedy legend Lin Shaye. It's a deep bench of great actors hired to take on what I assumed was a reboot of the early 2000s' J-Horror classic "Ju-On," or the less-classic American remake.

But then it gets interesting, with Nicolas Pesce hired to direct. Pesce is responsible for two of the most disturbing horror films of the last decade, with "The Eyes of My Mother" and "Piercing," movies so hard to watch that I love them dearly but will never sit through them again. With Pesce's deeply disturbing eye trained on the wet-headed little ghost children, what could go wrong?

This year's "The Grudge" isn't actually a reboot or a remake, it's a side-quel, taking place at the same time as 2004's remake, focusing on a character who leaves the Grudge house in Tokyo and brings the curse back to the U.S., passing it between three interrelated families. The film follows the three families as they die horribly, but the story isn't told linearly, so we learn the fate of the characters before seeing what happened to them, which robs the movie of much needed tension.

Even with some strange and counterintuitive storytelling choices, it's hard to discount "The Grudge" entirely, simply for the unbearable amount of dread Pesce manages to insert in almost every scene. This isn't a fun horror movie to watch, like "It" or "Evil Dead." It's filled to the brim with existential terror and madness that, even when undercut by sloppy editing and jump scares, manages to leave a mark on the soul.

Riseborough and Shaye are both so deeply committed to this hopeless universe that it's hard not to be heartbroken by their horrible fates. There are no happy endings to be had here. The best these characters can hope for is being haunted until the end of their days. So even though "The Grudge" is deeply flawed and messy, I can't seem to shake its bitter and depressing bleakness. It might not be fun, but it's definitely horror.