Even though I'm nearing the end of my sojourn here on this beautiful earth—our home away from home—I still appreciate fresh new experiences to keep me young.

Such was the case when I entered Tsunami Books on Willamette Street in Eugene. I was so taken by the way the books were laid out, and the welcoming spirit of the employees, I decided to give the store a couple copies of my book, "Tales from a Northwest Naturalist." 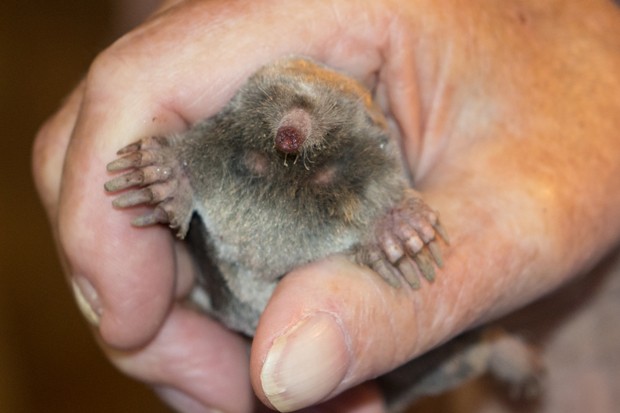 That was greeted by a big grin from everyone, and one of the guys behind the counter, Steve Gronert Ellerhoff, after thanking me for my books, said, "I wrote a book on moles. Would you like to have one?"

"You bet," I said, and the next time I came in he handed me his book, "Mole." It is the most wonderful treatise on moles I have ever had the pleasure of reading. Ellerhoff takes us on a jaunty journey into the life of moles around the world.

So, without a moment to lose, let's go underground...

No, moles are not blind, but they do have limited eyesight, so with that handicap they follow their nose. Anything that poses a threat or might be food is sensed by that exquisite nose. For a mole, that organ is everything.

The soil they displace in making their tunnels creates a very obvious mound. Like it or not, just about everybody who talks about them wants to kill them. That, dear friends, is what I would like to change—the continued idea that moles are somehow evil and should be removed from the face of the earth.

Unfortunately, many mole descriptions state they are gnawing pests, but moles are better known for being burrowing animals that feed on worms and other invertebrates, not plants.

There are four species of moles that can be found throughout the Northwest, including Oregon. They are the Townsend's mole, Broad-footed mole, Coast mole and the Shrew mole.

Not one of them possesses a threat to human life and limb—unless you happen to stumble into one of their tunnels and twist an ankle. Unlike some reptiles, moles do not possess venom of any kind. Unlike the gopher, who also goes tunneling under our lawns and gardens, hijacking our veggies, moles don't go out of their way making life miserable for humankind.

Those of you who spend time out in the garden may have met up with them. In this part of the country, I have found only one species: the Broad-footed variety.

Now, is it a mole or gopher that's bothering you and making tunnels in your garden? Positive identification is crucial for deciding what to do.

Tunneling moles make volcano-shaped mounds of soil without an obvious entrance. You should consider putting up with moles; everything they do in your garden is helping you, especially ridding you of insect pests.

Gophers make asymmetrical mounds, and often have a visible "plug" for their door. They eat roots, bark, carrots, beets and other garden plants. Voles, also known as meadow mice, use the tunnels of both moles and gophers. They eat plant parts and carry diseases that are bad news for humans.

You can prevent some problems by using ½-inch mesh hardware cloth on the bottoms of raised beds. And if you're planting new trees or shrubs, form a hardware cloth basket around their root balls for protection.

If you must remove moles, voles or gophers, trapping is the most reliable method. Use a trap that's the proper size for the animal you have and set it carefully, following all label directions. Once caught, handle dead animals with a plastic bag on your hand. Turn the bag inside out over the animal, tie the bag shut and put it in the trash to avoid possible flea or tick transmission. (This is especially true for ground squirrels; they are known carriers of the flea that transmits the Bubonic plague)

While snakes, raptors, cats and other predators may help reduce mole and gopher problems, "snake oil" is not likely to. Repellents, vibrators, noisemakers, smoke bombs, gas cartridges and predator urine are also unlikely to deter small mammals. Also, never use poison baits, also called rodenticides. They can be particularly dangerous to pets, children and other wildlife. They're less reliable than traps and are deadly to the world we live in.

I first encountered moles when I dug into a few of their tunnels in the cow pastures of Tillamook. I never did study them closely, however, and it wasn't until my wife Sue trapped one unintentionally in her garden that we reacquainted ourselves with this fascinating creature.

Without a doubt—for me—the most exciting part of Ellerhoff's book is what he presents on the marsupial moles of Australia. In the early '70s I went to the bush with a family of aborigines in North Australia. I wanted to spend time with the native people whom I have loved since I read about them in mystery writer Arthur Upfield's "Boney" books.

If I had known about the marsupial mole when I was feasting on other marsupials on the shores of the billabong with those wonderful people, how much richer would have been my time. It would have been so grand to have gone mole-searching with Daphne, the 12-year-old daughter of my host.