👣 Blogfoot: Did You Hear That?

December 18, 2019
comment
It's time again guys... grab your boots and binoculars, because we're back with another installment of Blogfoot!


In the first episode of "Expedition Bigfoot" we ended up losing one of the original team members, RPG, to some headaches from possible infrasound. I'm still not over the fact that this a hunting technique that animals use—and apparently Bigfoot too. At the the start of episode two, Bryce Johnson gets on the phone with Bob Gimlin—the man who recorded one of the most famous Bigfoot videos of all time, to help him recruit a new member.

But before his replacement could come in, there was still a lot of work to be done. Here's all that went down with the remaining trio in the second episode of "Expedition Bigfoot."

Tracing his steps, Russell Accord made his way back to the place where he heard something moving in the bushes and that horrible smell took over in episode one. While he did that, Miyera Mayor was heading out to play some Bigfoot calls into the distance—a common technique used in hunting, except she was using much more advanced speakers compared to your typical duck call.

The sound that came out of the speakers was like something howling in the distance, but with a much deeper tone than, say, a wolf. I honestly couldn't tell if the sound was actually from the speakers or if the show added it in post production... but either way I could definitely picture that being a Bigfoot howl.

Mayor played the recording out loud twice, when far away in the distance an almost too similar sound (like, really similar to what came out of the speaker) came back in response—and Mayor appeared shaken. She played it again a third time, but nothing came back. Based on what she heard, Mayor decided to head northwest to find what made the sound.

At this point it's pitch black in the middle of the night, and there's really no feeling that quite matches hiking through the wilderness when it's that dark out—especially when you're on the tail of a possible mysterious creature. Earlier in the episode, Accord set trip wires around his tent. When he made it back at night something had set the wires off—so he whips out his military-grade thermal binoculars to try and see what set the trigger off (yes, Accord might slightly be a badass). But alas, it turned out to only be a friendly-neighborhood deer.

In this episode, Johnson takes on us on another meet and greet with Brian Zemp, another Oregonian who says he survived a Bigfoot encounter. The story goes back to when Zemp was a kid—a story he says he hasn't really shared because he didn't want to get made fun of. He and his brother were out climbing trees when all of a sudden the loud sound of snapping of branches began to grow—followed by a "guttural" animal-like sound, one filled with heavy bass. Zemp says they ran inside, and the fear on his brother's face has stayed with him since those days. If this was a true account, Zemp did a great job because my guy actually seemed terrified even thinking about this memory.

The morning after, Mayor was going through shots from the trail cams, when one revealed a black figure that couldn't really be made out. "While this picture is interesting, I need something to corroborate it," Mayor said as she searched for more evidence. I personally don't think that picture was anything other than darkness in the woods, but it did look a bit out of place. 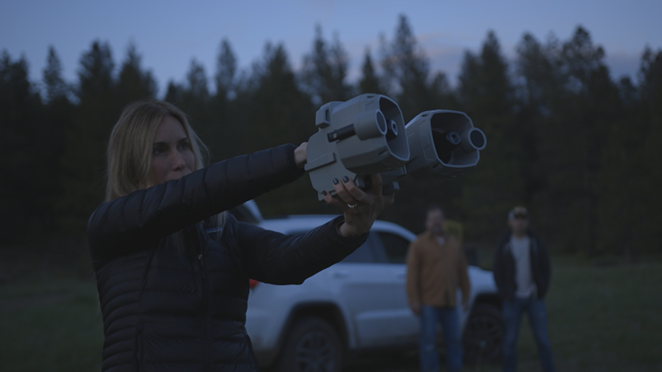 The show then fast forwards to day six of the expedition, where Accord was on the final leg of a three-day hike up to a 6,000 foot peak—the highest in the show's "Target Zone." Due to its inaccessibility, Accord believed it would be a prime spot for a Bigfoot to spend its time (I, too, enjoy being away from crowds of people, Bigfoot). After a few hours of search, Accord found fragments of unusual hair that will be sent to Johnson's base for testing. He seemed confident that it wasn't Elk, Deer or Bear—so the results of this test will be important to the expedition.

Interested in the sound Mayor heard earlier in the episode, Johnson worked on gathering some equipment to help pinpoint the mysterious sound's location while Accord tried to beat an incoming storm by repelling off of the ridge—I told you he was a badass.

Once the equipment was delivered to the scene, Mayor and two engineers from tech company CTSI headed back to where Mayor originally played the calls and placed Dragon Eggs (sound pinpointing technology that actually look like dragon eggs) around the area—and they got a hit after trying the calls again. So Mayor was off to the races before it got dark—and that's where the episode ends.

After episode two, it appears that the expedition is showing promise for this team of investigators, and the teaser for episode three looks to be filled with drama—results of the hair sample come back and a possible Bigfoot path of destruction is found on the scene.

"Expedition Bigfoot" airs Sundays at 7pm PST on the Travel Channel, with other showings throughout the week.