The tale of rehabbing a wild cat, and catching hares to do so

Way back in the mid-'50s I was living in the old George A. Jones house in Bend located on Dean and Lily Hollinshead's place. My great pal and superb helper in punishing raptor killers, Oregon State Police Officer Avon Mayfield, called me and asked if I would go with him to collect a bobcat held illegally in a sporting goods store in Bend.

He never said no to me when I called him about someone killing a hawk, owl or eagle, only, "Wait 'till I get my uniform on." So I was more than willing to accompany him, and we went to Franklin Avenue in Bend to pick up the bobcat. 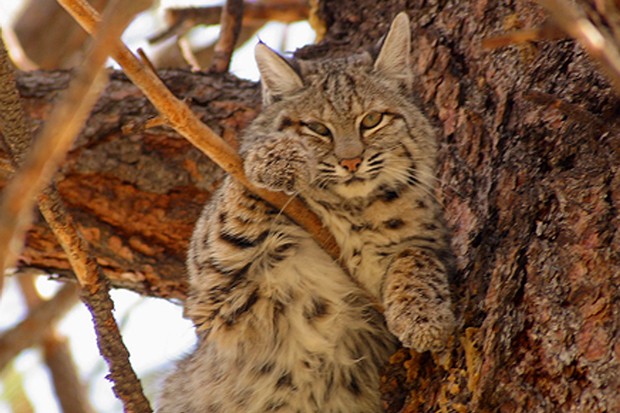 The poor skinny creature was an awful sight, shivering in a cage not much bigger than one to hold a house cat. I immediately noticed someone had removed its claws, and it was not in a healthy state.

Officer Mayfield was always polite, even with the worst wildlife violators, and this time was no different. He patiently informed the store owner why he was there, why the owner was in violation of state law prohibiting the holding of said bobcat, cited the owner and told him we were leaving with the poor animal.

We took the scared creature to my home where Dean Hollinshead helped me build a wood and wire holding cage that was 12 feet long, 4 feet wide and 6 feet high. I placed the bobcat in the pen that was landscaped with some big rocks, grasses and bitterbrush.

Luckily, the Bureau of Land Management's new seeding of crested wheat grass on their holdings on Powell Buttes had sprouted and was attracting lots of bobcat prey: jackrabbits (actually that's a misnomer. Jackrabbits are NOT rabbits, they are hares, which leaves them in the rabbit group, but not a rabbit, as such.) Ed Park, another great old pal, agreed to help me grab some jacks.

The poor skinny creature was an awful sight, shivering in a cage not much bigger than one to hold a house cat. tweet this

It took almost a year for that animal to learn how to kill the rabbits and hares we gave it with just its bare paws by batting them into unconsciousness, but I eventually released it healthy and hardy and able to feed itself near Cougar Mountain in Lake County.

How did we capture the bobcat's food, you ask? I tied a chair to the front end of my old flatbed Jeep. Park didn't like this arrangement for catching jackrabbits, but I impressed on him that the Jeep was mine, and he was the helper. He sat in the chair with a quick release seat belt and a salmon net attached to a long pole.

A jackrabbit, when pursued, goes through a series of escape feints that work most of the time. Eagles, coyotes and such will get as close as they can and just about the time they have the jackrabbit in their clutches, it stops in its tracks, makes a very quick right or left turn, or heads off in the opposite direction.

I'd follow the jackrabbit and wait until it got those escape sequences out of its system and then quickly close in on it. Park would reach out with the net, snatch it off the ground, twist the net like he was trapping a butterfly and I'd come to a screeching halt. I'd jump out, grab the jack by the hind legs and drop it into a cage. When the cage was full then we'd head home and call it a night.

One night I was having a difficult time getting close enough to the jacks for Park to net 'em, so I released Park's seat belt and said, "I wanna' try something."

He gave me a dirty look and said, "You damn well better be careful what you do to me!"

On the next jack I got as close as I could, waiting for Park to raise the net, then jammed on the brakes. He flew off the seat right on top of the jackrabbit and had it rolled up in a ball when I got to him.

When I got out he separated from the netted jackrabbit and had put it in the holding cage, I was headed for the driver's seat when he stopped me with a firm grip on my arm and said, "I got new rules, Jim... This time YOU do the netting and I'll do the driving." The look on his face convinced me it was going to be that way, and sure enough, as I was reaching out to net the next jack, he hit the brakes and I was launched into thin air at the top of Powell Buttes.

As Park was getting me untangled he said, "You OK, nothing busted?" I said I was OK, and he laughed in delight: "Oh, I love this! You keep netting and I'll keep driving."