Photo by Liz Devine. Bombadil dancing on the ceiling.

Photo by Liz Devine. Bombadil dances on the ceiling, but they sound nothing like Lionel Richie.

Like "Lord of the Rings?" So does Durham, North Carolina band Bombadil, sort of.

The band's name comes from the mysterious musical Tom Bombadil, a shadowy fringe character called "the oldest and the fatherless" in J.R.R. Tolkien's popular fantasy epics. Granted, like many LOTR film fans, no one in the band has read the books, but sufficed to say, they have some nerdy friends who suggested the name. 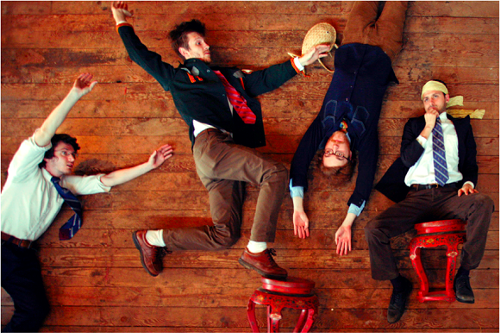 The folk-rock foursome tell elaborate, well-crafted stories with elusive themes, the personalities of instruments, the colors of songs, and other similar whimsical variations. Many of the songs sound sad, but are beautiful, bubbling with a country twang and abstract lyrics that serve as the stitching between the multi-insturmentalist members.

They will be joining indie favorites Dr. Dog and Dawes this weekend in Portland at the Crystal Ballroom, but tonight, they're right here in Bend. Here's a little preview of what you can expect, plus three other bandmates.