My roommate and I are best friends, and we've lived together for four years. Recently, she got into a pretty serious relationship, and it seems her priorities have totally shifted. Is a best friend always second place to a boyfriend? Or are they both of equal value? 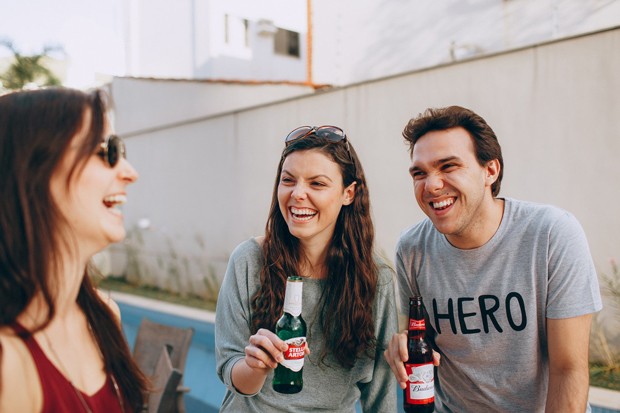 A female best friend can do a lot to make you happy—even give you a baby—though she'll have to wait till the NICU nurse gets busy and kidnap one for you.

It can feel like a betrayal to be downgraded in your bestie's life when a serious boyfriend comes around. However, evolution's ultimately to blame. "We are survival machines—robot vehicles blindly programmed" by evolution to preserve our genes by passing them to generations after us, explains biologist Richard Dawkins in "The Selfish Gene."

Simply put, we're each a big flesh bus driven by our genes, subconsciously steered to do their bidding. Psychiatrist and evolutionary medicine founder Randolph Nesse sums up the grim reality: Evolution "does not give a fig about our happiness." It likewise doesn't care whether we have friends, save for how they might help us survive and pass on our genes.

This sounds cold, but understanding the evolutionary reality can help you stay in your friend's life and keep her in yours—perhaps without taking her shift in priorities personally. I use that understanding—despite finding kids loud, sticky, and expensive—to be supportive of friends who are moms of young kids. I insist to them (and genuinely feel) that it's okay if they need to put off a call or drinks we've planned when they're wiped from work plus momming. An important caveat: These are dear friends who show up for me if I'm in need; I'm not rolling over for a bunch of userish socio-Pattys.

You likewise might consider reconfiguring your expectations so you two can stay friends and you won't make her feel she has to choose between you and the guy. You'd surely lose that battle—which means you and she would both end up losing. Supposedly, a truly "intimate" relationship is the sort you have with a man you love, but...well...when's the last time coffee with your bestie ran long and you faked an orgasm so you could get on with your day?

After my third date with a guy, he texted and asked why we hadn't had sex yet. I was taking it slow-ish because I was trying to figure out whether I liked him (and vice versa). I was pretty annoyed at his question, and we agreed we should stop seeing each other. Well, last week, he started texting me again. Nothing groundbreaking, just "hey" and "what's up." What's his deal — does he want another chance? Do I give it to him?

You probably like to wait to have sex till a guy shows he's truly interested in who you are—reflected in his asking questions like, "So, who are your favorite authors?" as opposed to, "Say, can you put your feet behind your head?"

Having sex can leave a woman with a belly of "OMG. How the hell do I pay for orthodontia, rehab, and grad school?" Because of this, female emotions evolved to make women feel unhappy or ambivalent about having sex in the absence of signs a guy cares about them (and will stick around and "invest"). However, men's standards for sex partners tend to be, um, lower: along the lines of, "So, are you female?" (if the man asking is solidly straight)—and in a pinch: "Are you at least a mammal?"

When the evolved "sexual strategy" that's typically optimal for one sex—like women taking it slowly—conflicts with that of the other, "strategic interference" like deception often ensues, explains evolutionary psychologist David Buss. Men feigning commitment to get sex is an example of this. However, with the evolution of this strategy, a deception-circumventing counterstrategy co-evolved in women: defaulting to the assumption they're being conned into bed until proven otherwise.

Chances are the guy's little "where's my sex?!" tantrum resulted from his getting impatient and fed up and falling out of strategic pretendo mode. Buss explains that our emotions are our first line of defense against strategic interference, and right on cue, yours were all "You pig!"

Regarding why the guy's back, he might be bored or desperate—or think he made a mistake. It's possible he misses you and wants another chance. If you're open to giving him one, make it clear that if he's just looking for a hookup, he's in the wrong place. As for when you might have sex with him, if ever, it'll happen when it happens. (Your vagina is not on a preset timer like a bomb.)