Walking into Bend's newest bookstore, Agia Sophia, the first sound I hear are those of relaxing, ancient Slavonic chants. An immediate feeling of calmness pervades me as a friendly, loquacious priest, fully garbed in a cassock, greets me. Within minutes Father Damian Kuolt, the cheerful owner, offers me a cup of coffee and a slice of baklava. 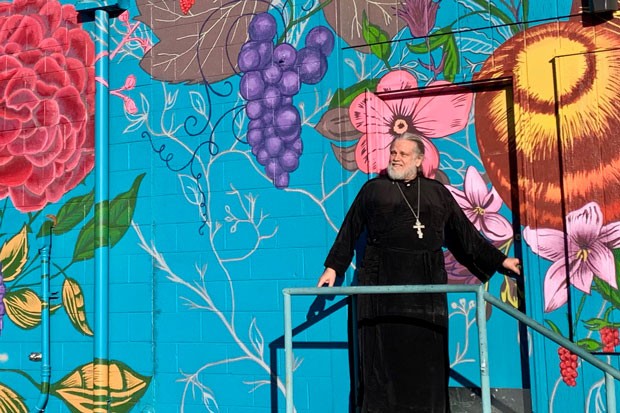 "This is homemade by a local Greek (Crete) woman," he says, drizzling sweet syrup over the dessert. I almost ask for another. Just as tasty is my coffee, supplied by Bend's Farewell Coffee Roasters. As we sit at the newly installed coffee and pastry bar, located along Greenwood Avenue in Bend, I ask Kuolt about his decision to become a priest.

"My grandfather was a missionary in India, so I believe the ministry called me at an early age," he explains.

Before the priesthood he made a living as a software developer— a profession that allowed him to travel to Europe, Asia, and many other parts of the world. Eventually though, the urge to serve others won out. Currently, he's the pastor at St. Jacob's Orthodox Christian Church. Gatherings are held at the coffee shop.

We spoke about the misconceptions of being a priest.

"For one, I'm a priest and I'm married. My wife Joanna and I raised four children. While the Western Church splintered into hundreds of religions (Catholics, Baptists, etc.), the Eastern Orthodox church hasn't changed since it began in the first century."

Asked why they chose Bend, he laughs.

"I visited the DMV and they were so polite and courteous. You really get a sense of how a town is by visiting the DMV," Kuolt explained. This article took not one, but a few visits—mostly because Father Damian has so much going on with remodeling and running the new bookstore, which changed hands in June and reopened in December. A customer walking in, a phone call, one of his dedicated volunteers asking a question; all competing distractions. Still, Kuolt never fails to make sure a customer feels welcome.

“I just want people to have a place to connect, to relax, and to contemplate the simple things in life.”—Father Damian Kuolt tweet this

Formerly known as Open Book, the newly renamed store is named after the famous Byzantine chapel, the Hagia Sophia, a magnificent structure built in Turkey nearly 1,500 years ago. The church still stands today, attracting visitors from all over the world.

"Our shop got rid of some books to make room for the chapel and coffee shop. Nobody in Bend really wants to read about gardening in Vermont. Our goal is to carry local and out of print books, and we really want to build a quality collection," Kuolt said.

Agia Sophia still retains a large selection of recycled literature from its predecessor and welcomes trade-ins. Former customers of the Open Book who exchanged books still have credit and are able to use it.

Since its Dec. 6 soft opening, the bookstore has already hosted events; a vinegar tasting and a First Friday Art & Author event featuring the work of Christopher Burkett and yours truly. With a variety of events planned for the near future—more authors, medical professionals discussing palliative care, and a coffee tasting, to name a few—Agia Sophia is sure to attract locals with all types of interests.

The revamped room in the back of the shop allows ample space for groups. Father Damian encourages local businesses, book clubs, and others to hold meetings there.

"We're here to create a better community. I'm not here to proselytize. I just want people to have a place to connect, to relax, and to contemplate the simple things in life."