Boot: People are dying in the heat, while others are collecting likes on social media for trolling them. | Editorial | Bend | The Source Weekly - Bend, Oregon

Boot: People are dying in the heat, while others are collecting likes on social media for trolling them.

This week, while the average person hunkers down in front of a fan or in that coveted air-conditioned room, people on the margins in our community are fighting for their lives. The record heat we are experiencing all around the region became deadly this past weekend for two people living on the literal margins of Bend, who were camped on the stretch of Hunnell Road just off Highway 97.

It is already difficult for this population to fight the myriad number of false misperceptions about the circumstances that lead to being on the streets. Many in our community turn down their nose at houseless people and assume that their life choices alone—and not the high cost of housing, or the widening gap of income inequality, or the dearth of mental health and substance abuse funding—are the reasons someone might find themselves living in a tent or a trailer on the edge of town.


Related Poverty With a View?: Bend ranks in the top 12% for income inequality compared to other U.S. cities

Poverty With a View?
Bend ranks in the top 12% for income inequality compared to other U.S. cities
By Laurel Brauns
Local News

It is a struggle to educate and fund a solution to this issue and harder still to overcome the malaise that it is "someone else's problem." 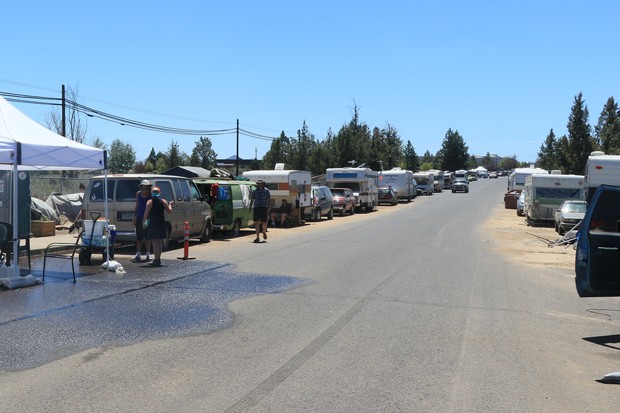 However, with the increasing visibility of the houseless community, several individuals have taken the almost incomprehensible position of making the lives of our houseless neighbors even harder.

Spend some time with those living on our streets and the horror stories you'll hear may be less about the choices they themselves are forced to make and more about the horrifying treatment they endure by those with privilege. Volunteers and those without homes tell us how they've been subject to eggs being thrown at them; to rocks being thrown at them; to people driving through and "blowing coal" on the dwellings they call home. At least one local has even taken to TikTok with videos of him trolling through the Hunnell camp, lamenting the mess from the comfort of an air-conditioned vehicle.

Related Beating The Heat: Cooling centers in Bend, Redmond and Madras provide a place for unhoused people to escape the blistering heat

Beating The Heat
Cooling centers in Bend, Redmond and Madras provide a place for unhoused people to escape the blistering heat
By Jack Harvel
Local News

In the midst of a massive heat wave, this is how some Central Oregonians are spending their time. In our ongoing boot/slipper series, we give our biggest boot to the people who, rather than offering an ounce of comfort to those suffering, offer more discomfort instead. It is depressing to hear these stories of adding insult to injury, and as much as we'd like to say, "This is not what Bend is," unfortunately, it is. People are dying while others are collecting likes on social media for trolling them.

What we are seeing in increasing numbers is not a result of a lack of effort on the part of countless volunteers and agencies who have been sounding the alarm on this crisis for years. The very least—and that's a very low bar—those not involved can do is to not make things worse.