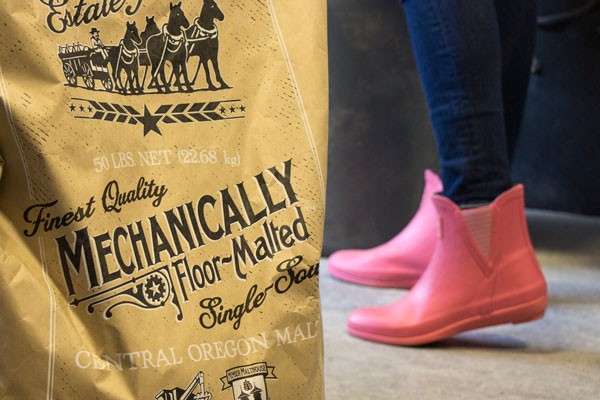 The morning following International Women's Day, a small group of women gathered in a garage at Bridge 99 Brewery in Bend. I was expecting more pink, but I only spied a single pair of pink rubber boots on a tiny blonde lugging around 50-pound bags of malt.

"We grow the barley—we plant it, we grow it, we harvest it and then we malt it," says Sally Klann, co-owner of Mecca Grade Estate Malt. "So we do everything on site—we don't contract other farmers."

Mecca Grade Estate Malt donated 135 pounds of malt to the Pink Boots Collaborative Brew Day, an event organized by the Bend chapter of the national nonprofit, Pink Boots Society. The organization aims to help women in the craft beer industry advance their careers through continued education.

On March 8 and 9, over 200 collaborative beers were brewed by women worldwide in an effort to raise the profile of women working in the beer industry. 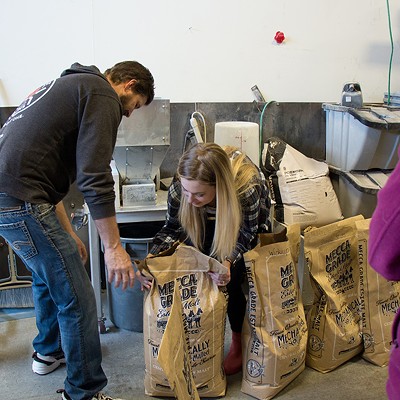 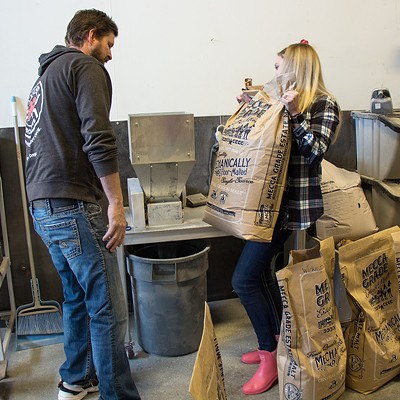 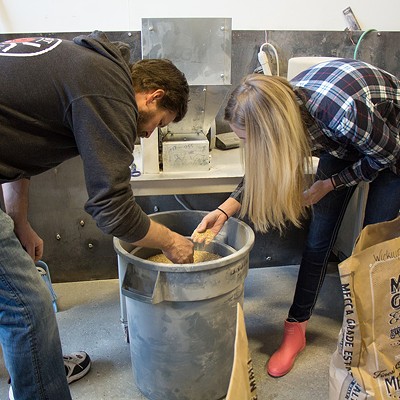 Victoria Chaplin, lab manager at Worthy Brewing, started the Bend chapter in May 2017, along with co-worker Shae Maloney, a brewer and lab tech. They're both relatively new to Bend and felt that Central Oregon was lacking a space for female brewers and beer industry professionals to network.

"Tori and I started this last year and it was pretty small," said Maloney. "There were only probably about four of us, four or five of us, that were part of it, and to now see that we are able to bring more females from different breweries around town and really bringing everyone together, you know, is really awesome."

"We're kind of at a moment where I think women are really coming together to lift each other up," said Chaplin. "It was just a good opportunity."

Chaplin says she expects that they'll make $2,000 to $2,500 from the sale of their collaboration brew. Bridge 99 Brewery will donate all the money made from sales to the national Pink Boots Society organization. The funds will be used for scholarships and continued education programs for women in the industry.

In addition to the malt that Klann's farm donated, Deschutes Brewery donated yeast. Bridge 99 Brewery lent out its brew facility for the day, as well as donating hops and salts.

Chaplin says the malt will create a "biscuit-y" flavor and aroma, hopefully with some graham cracker notes, paired with the tropical notes from the yeast, adding mango and pineapple notes to the flavor profile. The idea is to create a unique, hoppy table beer.

"If you've worked a 10-hour day and then you're trying to have your shift beer and if it's something really big, you're like, I still have to drive home, make dinner, go grocery shopping— whatever," said Chaplin. "So, something that's well-rounded, complex and really drinkable is what we're aiming for."

The Pink Boots Collaboration Brew will be tapped April 7 at Bridge 99 Brewery.