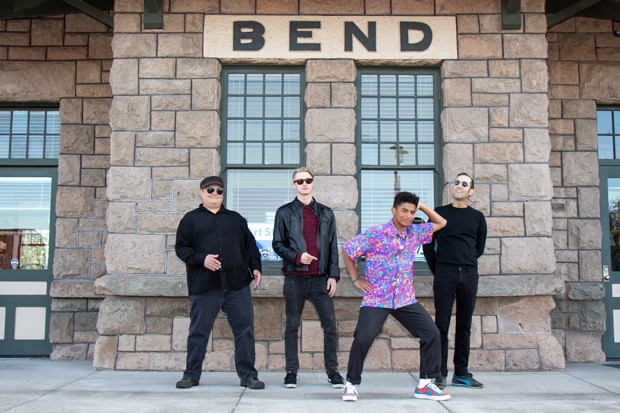 Plenty of people have had something to say about the talent of one of the youngest band leaders in Bend, 14-year-old Maxwell Friedman. Friedman, who recently started his freshman year of high school, already boasts a well-rounded career in music — yes, I said career. And yes, he's only a teenager.

It could be said that Friedman, who leads the Maxwell Friedman Group on keys, was born with music running through his veins. His biological father, Carlos Washington, played trumpet for Karl Denson's Tiny Universe. Denson himself encouraged Friedman's parents to put him in piano lessons at age 8, to get him started on the right foot.

Before picking up the keys, Friedman was into banging on things, which led to drum lessons. Friedman played the drums until age 7, when he decided to try to learn the guitar while attending Amity Creek Elementary School. He understood the theory behind the guitar, but his foray into the stringed instrument didn't last long.

"I got really bored with classical after about five or six months," Friedman recalls. "I started with a local piano teacher, George Bouhey, and I've had such great experiences with George. He helped, getting me to play live in front of people. In the fall, I started jazz. That was a great experience for me and how I got started in music — because of my dad, my grandparents, my piano teacher at school, Dale Largent, George. All of those people helped get me to where I am today."

The Maxwell Friedman Group, which includes local musicians Mark Karwan, Connor Streeter and Gabe Johnson, takes influence from neo-jazz, dance music and improvisation. Friedman brands the style of music as "neo-jazz funk soul fusion," blending the skills of jazz musicians with the improvisation of funk music to get people dancing.

"This neo-soul stuff, it's extremely fun to play. You can take influences from all types of jazz, you can do weird alternatives and all types of voice leading for improvisations," Friedman says. "Let's say you were hired as keyboard player for Taylor Swift. There's no improvisation, it has to be catchy. There are a lot more elements to jazz. Jazz shows on their own are great for building your jazz vocabulary, and I do stuff like that now with my student jazz ensemble."

"Other kids are like, 'Let's go to the football game on Thursday night,' and I'm like, 'I can't, I have a gig,'" Friedman admits. "It's interesting to not only be working coming into high school, but interesting to be a gigging musician. It's kind of surprising, but then again, I've been playing for so long. I just want to share my music with others and make them feel something."

In the past, Friedman sat in with other bands and musicians at Bend Roots. This year, he's excited to have his band have its own time slot, seeing it as an accolade to be a part of both the festival and the local music scene itself.

"It's an honor because I grew up listening to local bands... local musicians and being educated by them," Friedman says. "Being a part of the scene and playing around town has been a big honor. It's really amazing that I have this band and do what I do and play shows, because I get to spread love and positivity through music to the entire community."