Boss Rambler Brewing opened to the public April 20. I made it in the next day to check it out. The first thing you notice is how much the outside of the building has changed from when it was a board shop. It's bright and inviting with an enormous "Beer Club" sign. The outdoor seating is ample, with a bathroom available from the outside and a food truck around the corner. Cold? They have a very nice gas firepit to sit around as well. 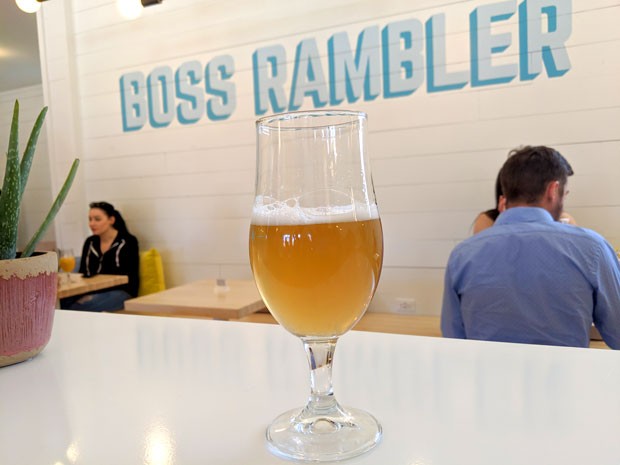 I had two beers during my visit (OK... I had more than that, but I will write about two of them). First up was a hazy double dry hopped hazy IPA called "Bro? Brah!"

I admit it... I tried it because of the name. I just wanted to say it when I was asked for my order. Totally worth it. But seriously, this beer is great. They call this beer a West "Coast-ish" IPA. When you hold this beer up to the light, it's bright, hazy and sports a deep golden coloring. Bringing it up for a drink, the aroma is a bouquet of hops; Amarillo, Cascade and Citra. You can smell some grapefruit and a little melon, but it's subtle. Upon tasting, you're met with a light bitterness (again, from the hops) but the fruity notes from this beer balances those bitter points perfectly. The fruity notes are grapefruit and melon, somewhat mimicking the aroma. Like all the (many) beers I've had from them, this beer is very drinkable. The ABV on this beer is 6.2 percent—fairly moderate.

The next beer everyone needs to know about is Lost In San Blas. This beer has an ABV of 5.5 percent and is a dry-hopped lager with Citra hops. This beer is visually very light and bubbly. Really beautiful. Looking at this beer made me thirsty! The aroma was floral and fruity... peachy, really. On the tongue, you get a beautiful fresh peach flavor nestled into the lager. Very light and refreshing. This beer will fit perfectly in my floating tube's cup holder because it's so light bodied and bright. It's something I could drink ALL DAY, but being it is over 5 percent, only professionals should try THAT at home.

These beers, and this Beer Club make me smile. When I think of Boss Rambler Beer Club, I think bright, inviting, and relaxing. I feel like I'm on vacation each time I enter (yep, I've been there a couple times now). They stand out from the other breweries because of their aesthetic, but also because of the drinkability of their beers. I have yet to have a beer from them that wouldn't be a 5 out of 5 on my drinkability scale. That makes sense since drinkability is their focus. There is probably going to be something for nearly everybody to drink here. They even make their own sparkling water. I should mention they also have Megaphone Coffee in their space as well, so you can go by in the morning for a coffee, and then head over later in the day for a beer. It's sweet! Cheers!