Boss Rambler Gets Its Own Brewery

Boss Rambler Beer Club has pulled off a lot in its brief run that, this Saturday, April 16, celebrates three years since opening its doors on Galveston. (The beer debuted a year before the taproom.) That means two-thirds of the operation overlapped a world-paralyzing pandemic. To survive, Boss Rambler did what virtually everyone did: pivot. Originally conceived as a draft-only beer maker, Boss Rambler cans can now be found at the Beer Club and in retail locations from here to Portland. 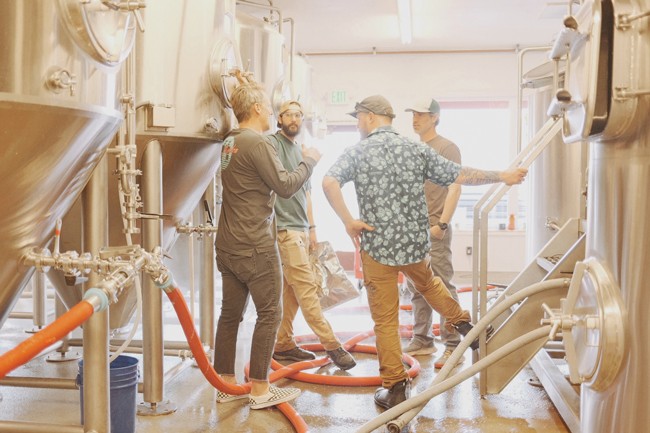 Boss Rambler is starting to brew in its own facility, having taken over the defunct Riverbend Brewing, which launched in 2013 but sputtered out last year. Until now, Boss Rambler operated as what the beer biz calls an A.P., an alternating proprietorship, and brewed at Silver Moon Brewing. The upside, Molletta says, is that "it allowed us to get established and 'prove' ourselves without the huge, upfront expense of building or purchasing a brewery." The caveat, however, is that the company "got to a point where we needed more capacity and control...We feel extremely lucky to have received so much local support—and afar—that allowed us to grow throughout the pandemic."

Boss Rambler offers a broad range of styles, but has a three-pronged focus on crispy lagers, juicy IPAs and sour fruit beers. The latter, alternately known as smoothie or slushie beers, can be found served from a bona fide slushie machine, but cans are always available—including the "Chill'r" series of tropical cocktail-inspired beers like Painkiller and Miami Vice. Tiki, daquiri or slushie beers are largely the domain of select Florida or Southern California breweries, but Boss Rambler joins Portland's Great Notion as Oregon's top purveyors.  Such beers are also semi-famous for exploding (literally having cans burst open due to unchecked fermentation, thanks to fruit's residual sugars) on warm store shelves. But Bansmer has deftly avoided that hazard.

"The biggest challenge for us was figuring out a way to shelf stabilize our fruited beers so they wouldn't referment and explode without affecting the flavor or integrity. Now we feel extremely confident in using fruit regularly and the rewards are unmatched flavors and being able to push the boundaries with styles like our super-fruited and cocktail-influenced beers," Moletta says.

"We came across the Riverbend opportunity and jumped at it. It was the perfect fit as we were in need of additional capacity ASAP and it allowed us to essentially walk in and get to work."

The new digs will not be open to the public—at least for the foreseeable future—but the bosses do have some undisclosed plans for future expansion and hope to be able to hold an open house. Until then, the anniversary party includes a DJ, custom on-site hat printing, and more than one new beer release. Here's to hoping it's a Blue Hawaiian in beer form.