Bounty of the Hop Harvest

September means many different things to many different people. For parents, it means back to school. For local businesses it marks the end of the summer tourist season. But for Northwest brewers, it means only one thing: hop harvest and fresh-hop beers. 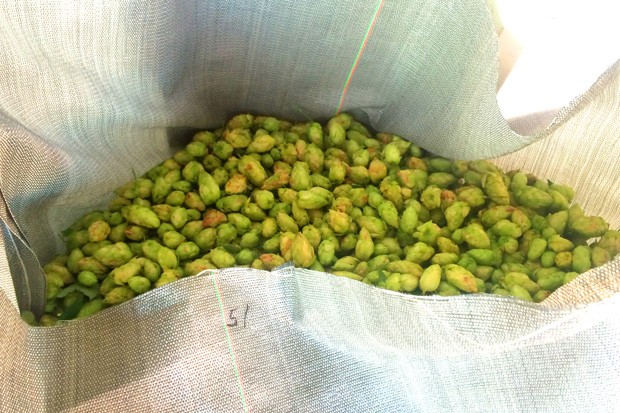 Oregon's Willamette Valley—along with Washington's Yakima Valley and Northern Idaho—grow over 95% of the hops in the U.S. Many growers have tended their hop yards through multiple generations. The close proximity to hop fields has allowed Northwest brewers to build connections that are unparalleled in the rest of the country. This connection with hop growers manifests itself every fall with the abundance of fresh-hop beers produced in the Northwest.

Fresh-hop beers are the last truly seasonal beer style, because unlike other styles that can be brewed any time of the year, fresh-hop beers can only be brewed during hop harvest. Hops contain a lot of moisture, so to prevent spoiling and to preserve precious oils they are kiln dried immediately after harvest. With fresh-hop beers, brewers travel directly to the hop fields to procure fresh hops prior to drying and then return to the brewery as quickly as possible to put the fresh hops directly into the beer. Because of the additional moisture content, brewers must use a much larger amount of fresh hops, anywhere from 10 to 20 pounds per barrel! Some brewers choose to "dry hop" with fresh hops in a brite tank; others, such as Portland's Breakside Brewery, employ a method of freezing fresh hops with liquid nitrogen and shattering them before adding them to the beer. I've always found the best results come from utilizing the brewery's mash tun as a giant hopback and running the fresh wort through a bed of fresh hops en route to the fermenter.

Fresh hops must be used as quickly as possible after harvest, which presents a load of logistical challenges for brewers who must be ready to brew the beer as soon as the farmer tells them a specific variety is being harvested. Central Oregon brewers also have to factor in a 6-hour round trip drive to the hop fields. Once harvest begins in late August, it runs 24 hours a day until all the fields have been picked at the end of September—which means harvest dates tend to shift around, depending on field conditions. Coming on the back of the busy summer season, fresh-hop beers provide a reaffirmation for brewers of the specialness of the place we live and helps to reinvigorate our passion despite the logistical challenges.

Fresh-hop beers have already begun to appear on shelves and tap lists but tend to disappear quickly. The best chance to try a wide variety is at one of the many fresh-hop festivals held throughout the state, starting Saturday, Sept. 21 with the Hood River Hops Fest, continuing the following weekend with the Sisters Fresh Hop Festival Sept. 28 and Portland Fresh Hop Festival on Sept. 27 and 28. The season culminates Oct. 5 with Bend Brewing Company's 3rd Annual Fresh Hops on the Pond.