Give owls a place to live. Then band them for study

One of the things I enjoy about growing older is that I still have the get-up-and-go to join old friends who not only share what I love to do, but never miss the opportunity to do so. Like when Dick Tipton sent me an email about a saw-whet owl using one of his kestrel nesting boxes to raise a family.

Tipton is a master at building nesting boxes; they're a work of art. He got into the business when he crossed trails with Don McCartney and his American Kestrel nesting box trail. And I got into kestrel banding when McCartney's boxes began to produce lots and lots of kestrel babies for me to band.

This all got started almost 20 years ago when McCartney called me about a nesting box he had built for small owls and wanted my thoughts on where to put it. I thought the Delicious Fire area out near Tumalo Reservoir would be perfect since the sprawling sagebrush meadows that burned were healing, and the new greenery coming on would support a plethora of rodents that small owls go for in a big way.

We went out there together, located a small group of trees that escaped the holocaust and decided on a healthy pine on the northern edge of the unit. We put the box up about 12 feet above the surface, facing the north and the meadow, leaving Nature to take its course.

Almost immediately, McCartney called me to report an American Kestrel had moved in, and that began a love affair between him and our smallest falcon that has gone on to heights today beyond belief.

In the course of McCartney's incredible box-making pursuits, he has installed over 300 "small owl" nesting boxes all the way from Brothers to Sisters—all being used by kestrels. It wasn't until Tipton got into it in the area northeast of Sisters that we actually got our first small owl using a kestrel box to raise a family. It was a Northern Saw-whet owl.

The area that Tipton volunteered to place nesting boxes and watch for kestrels covers about 45 square miles between Sisters and the Grandview area, and it takes Tipton and Marj, his wife, many hours and many gallons of gas to cover it each spring. Tipton has hidden all his 27 boxes from people, because the gun nuts have shot so many of them to smithereens just for the fun of it. 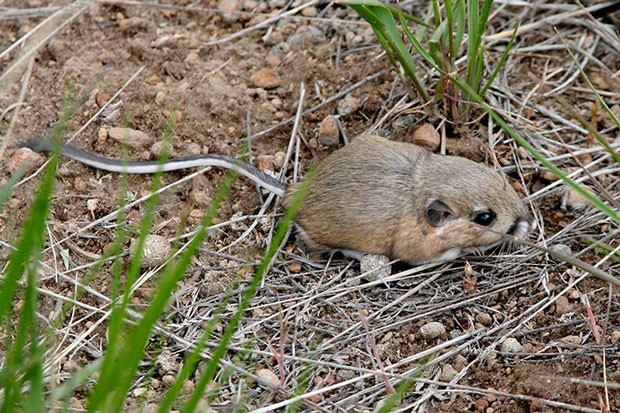 When he asked if I wanted to band the babies I promptly answered, "Yes!" without considering his penchant for hiding boxes. Consequently, it was a longer hike from our vehicles than I really wanted to make, what with my heart and lung problems.

What saved me were our pals, Ken Hashagen and his dear wife Ann Nora coming along. Ken carried my banding stuff for me and that relieved the great need I have for oxygen when exercising. Ken was my kestrel sub-bander for years and is now a U.S. Geological Survey Master Bander. Hopefully, he'll take over banding Golden Eagles when I go out among the stars.

Getting the small owls out of the box is always a challenge, but Tipton's long-time experience of helping to band kestrels came to the fore, and he delivered the five babies to our group flawlessly and happily. He also provided us with a wonderful clue as to what the owls were eating as they grew up. He noticed the tail of a kangaroo rat lying in the bottom of the box as he was sending owls down to us.

Which brings up an interesting point about saw-whets. As the babies grow, the parents move out of the box and just bring in food, dropping it and quickly leaving. By the time the owlets fledge, the box (or tree cavity) is crammed with pellets and the remains of dead prey, which is enough to gag a maggot.

Banding is, of course, a one-at-a-time activity, so while I was banding the babies with the help of Marj, my wife Sue and Ann Nora looked them over for parasites. Ken took that opportunity to line them up on a dead juniper branch and photographed them just like Herman T. Bohlman and William L. Finley —Oregon's first Bird People — did with the same species way back in the beginning of the 1900s.

Banding will hopefully provide more data on how long these little guys live and what they do in winter. In the 1990s, the Cornell Lab of Ornithology set up a study on migrating owls, with more than 100 owl banding sites, trapping them in mist nets, eventually banding thousands of small owls.

In October of 1999 a banded owl landed on a fishing vessel in the Atlantic Ocean, 70 miles offshore near Montauk, New York. It would be sensational if one of Tipton's little owls turned up on a fishing vessel out on the Pacific, or Hashagan was notified in 2040 that one of Dick's owls was discovered in the same box it was raised in with a family of its own...

In Case You Missed It: Video! Jim Anderson stars in a Source video about making bird boxes. Find the video on the Natural World page of bendsource.com.