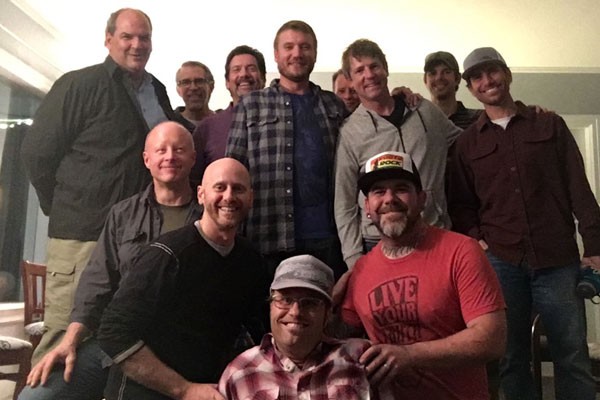 ne of Hollywood's most powerful producers, a man accustomed to churning out Oscar statues like so much theater popcorn, winds up in disgrace after explosive, widespread charges of sexual harassment.

A "lone wolf" gunman smashes out the windows inside his Las Vegas hotel suite before opening fire on the crowd gathered for a concert below. When it's over, nearly 60 people are dead. Over 500 others are injured.

An ex-congressman heads to prison after a series of sexting scandals. The sentence comes down after he pleads guilty in federal court to transferring obscene material to a minor.

What can we possibly take away from these recent, jarring headlines? And even if we could actually identify some hint of a common thread, what can anyone do about it? One Bend woman, a self-described "courage coach" with a background in art, painting and yogic philosophy, may at least have a framework in place. It's called "Man Camp."

"Man Camp's a one day event focused on building strong leaders—employees, husbands, fathers and community members," says founder Amy Turner, whose organization, Courage Tribe, is producing the event. "It's been created for men to come and connect across diverse industries and backgrounds, allowing them access to methods that reduce stress and anxiety, to visualize their future course, to come together in a space where they can learn techniques for authenticity."

Pay attention to that word "courage," says Turner. Its root word means "heart." Through the Courage Tribe, which includes both men and women, she says, "We are igniting, teaching and spreading everyday courage—the connection to that heart space."

Judging from the terminology, you could very easily picture this as an adult gathering. But Man Camp's open to older boys as well—as long as they're at least 15. Turner emphasizes the importance of these young adults surrounded by a sea of role models who together form a high-functioning community.

"Role models who are very grounded are often few and further between than is beneficial to individuals and society," says Turner. "So any time there can be an opportunity for men coming of age to be in an environment seeing the men in the generation above them learning, growing and putting attention on self-betterment—the betterment of that person and the benefit of the people around—then they see it's OK to seek growth opportunities in unique ways and to build themselves up, versus thinking that they need to be isolated and superhuman tough and have all the answers.

an Camp's an all-day event that includes a series of "work[play]shops." The first has a rather female flair: "Masculinity and its Connection to the Feminine Spirit." According to Turner, "It's a time to understand, from a holistic perspective, character traits innate within each human being that can be developed and called upon in a variety of different situations to produce intentional or successful results." This workshop's combined with a session in the ancient practice of "Qi gong" – which includes posture, movement, breathing and meditation exercises. Qigong is Chinese for "life force cultivation."

Later in the day, another workshop offers time to practice West African drumming, courtesy of djembe instructor David Visiko, who also conducts lessons out of his Bend home. What's drumming got to do with Man Camp? "Participants will have an experiential opportunity to learn about masculine vulnerability while playing a traditional West African rhythm as a group," he says. "I have found that people can enter a drum class or circle with hesitation, fear and uncertainty and leave with smiles, joy and a strong, positive vibe.

"What inspired me to be a part of Man Camp was my appreciation of the efforts, energy and resources that Amy, as a woman, was putting forward to meet requests from men wishing that there was a male version of a woman's Courage Tribe gathering," he says. Visiko believes that most men have a quest to be better than how news headlines define them.

"Men are often provided with messages to be sensitive, present, emotive, talkative and compassionate while at the same time, asked to adhere to negative stereotypes and ways of being a man—reinforced by both men and women," he says. "I think this can cause great confusion in how to be. I am happy that the Man Camp event exists to provide a safer space to connect, discuss and strive toward a version of a healthier, powerful and loving masculinity within our Central Oregon communities."