Breakfast burritos worth leaving for work early for | The Source Weekly - Bend, Oregon

Breakfast burritos worth leaving for work early for

Burrito Sunrise happens to be on my morning bike-commute to work—and I say it with utmost love that I sorta wish it wasn't. I mean, how is a person supposed to stay alert after consuming one of these babies before the workday even starts?

It's not hard to identify Burrito Sunrise's truck, now parked along Greenwood Avenue (it was in another location at Fitness 1440 before moving in early March). Not only is it bright yellow—but most mornings, at least a handful of people are milling around along Greenwood, waiting for their dose of breakfast-burrito goodness. Advertised as "California-Style Breakfast Burritos," these are burritos worth leaving for work a little early, so that you can get your fix and get on with your day. Heck, it might even mean you can skip lunch—though since they're open until 1pm every day but Sunday, you could eat it for actual lunch, too. 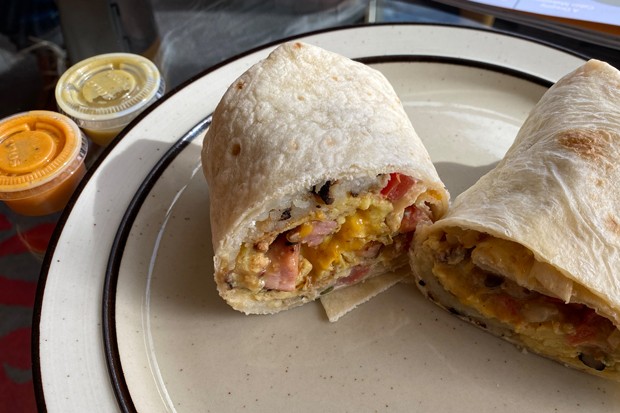 Burrito Sunrise's offerings include a few noteworthy items. Its menu is stacked with breakfast burritos in every variety, all starting with eggs, hash browns, salsa, sour cream and grilled onions. The Plain includes the above items, plus chipotle black beans, bell pepper and salsa verde for a vegetarian offering. The Hog features ham and bacon, and then there's the Tri-Tip, the Chorizo and The Bird, with cilantro-lime chicken. The Hog is delicious, with extra-smoky ham and bacon, but what stood out for me was the hash browns, cooked on the flat-top grill in bacon fat, Burrito Sunrise's staff told me on a recent visit. That treatment results in a creamy texture with just a hint of crispiness on the outside. The Tri-Tip is a bit of a departure from your standard breakfast burrito—but I mean, why not have a little steak in the morning?

Burrito Sunrise's salsas are also stellar, also with a hint of creaminess, and coming in a variety of levels of spice. For the lover of salsa and spice, I suggest trying them all. 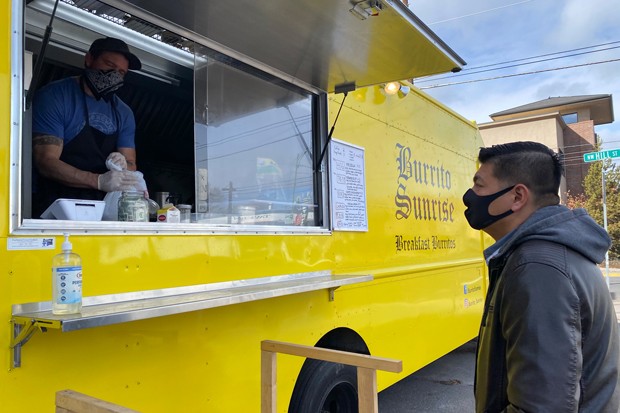 "I blend them up, so they turn into more of a sauce than salsa," he said. "Then I add garlic and onions in greater amounts than a Mexican-style salsa—which is what makes it California style." Kennedy, who grew up in California, went to culinary school in 2004, and moved to Bend about three years ago, says he's loving his new location and his customers. His plans for the future? Keeping things simple and consistent with a solid four or five menu items—which, if my cravings for the goods in that bright-yellow truck are any indication—seems to be working out quite well for everyone involved.