Adventures at The Pancake Wagon 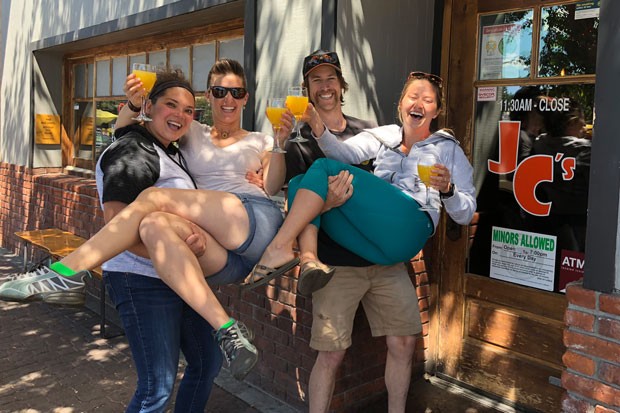 "Did you notice The Pancake Wagon is closed?" Darlene Veenhuizen of the Tough Cookie podcast asked me, picking up a slice of grassy Cloud Cap cheese from Cascadia Creamery at a summer cheese party.

"Yes," I replied, "I thought they might be closed for a summer break." Veenhuizen said, "I think they are trying to expand, they have a GoFundMe campaign." I immediately sent owners Caley and Basia Brach a Facebook message to find out.

The Pancake Wagon has been closed since the beginning of July. Supportive customers, who still want their stacks, pancake burritos and pancake muffins, have been leaving the Brachs voicemails, saying, "The city is missing your food."

Later, I met Caley Brach at JC's Bar and Grill downtown. When I arrived, I found Caley and Basia Brach in a booth with the owners of JC's, Cambria and Andy Savage.

When I asked what was happening, Caley Brach looked at me with a bright smile—the kind that lights up a room—and immediately went into the story. "We realized we maxed out on how much we can do in our camper. We couldn't keep up with demand and we knew we needed to do something."

"When she spoke of the new partnership she said, "It feels like we are getting married and creating a new family." —Cambria Savage tweet this

The challenges of running a food truck are real. The Brachs prepared everything at a commercial kitchen and brought it to the camper. If they ran out of batter they couldn't just make more without leaving customers. The summer heat cranked the temperature in the camper up to uncomfortable heights. Some days it would reach 130 degrees.

"If the business can't grow, we can't grow," Basia Brach said passionately. The couple tried to grow last summer, but their business manager, who was the best man at their wedding, died by suicide. They took a little time off from the business for some needed self care and then found a way to get back to their 18- to 20-hour days. This summer, they say their business grew by 175 percent over last year. By July they decided to see what they could do to grow.

The Brachs wanted to find a space where they could do prep and service in one place, with room to serve more people and offer an expanded beverage menu for the 21-and-over crowd. To make this happen they started a GoFundMe campaign to raise $15,000.

Their customers were supportive, leaving voicemails with ideas including where they found vacant commercial space and which food lot they should join. A friend sent them a Craigslist ad that read, "Food Cart Business Wanted for Brick and Mortar Space in Downtown Bend."

The ad was from JC's Bar & Grill. The Savages, who bought the business almost two years ago, had expertise in the bar but didn't want to work the kitchen anymore. The Brachs got excited and contacted the Savages.

The Pancake Wagon will now be part of JC's Bar & Grill. The joint venture should be launched by the end of August. The Brachs will serve breakfast and lunch until 3 pm and then offer chicken wings, mozzarella sticks, burgers and diner food until close.

Meanwhile, Pancake Wagon fans with families won't be missing out. Minors are allowed in the restaurant until 7 pm. And like the Brachs had hoped, adult beverages will be on the menu. You might even see a signature Pancake Wagon cocktail with whiskey and maple syrup. Insider tip: on Sundays, bottomless mimosas are $12.

Cambria Savage told me, "We wanted someone with a following. We've been working hard to change the vibe at JC's Bar & Grill to who we are." When she spoke of the new partnership she said, "It feels like we are getting married and creating a new family."