Bride-to-Be on the Loose

It’s the big pre-wedding question: Where to bachelorette?

January 10, 2019
comment
During certain times of the year, it can be difficult to walk Bond or Wall Street past sundown without seeing a parade of females dressed to the nines, the leader in a tiara and sash which reads, “Bride to be.” 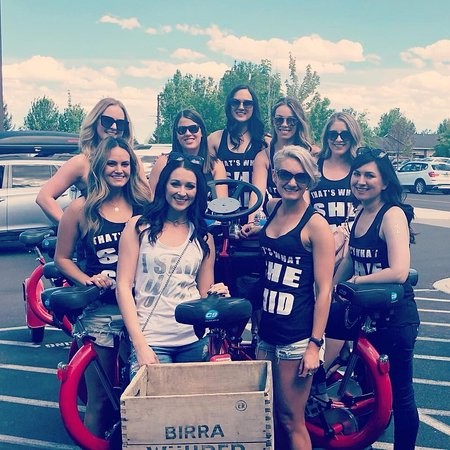 So, what’s on the itinerary?

Portlandia911 asked this question via Tripadvisor in 2012 saying, “Bend, this is your warning that a dozen ladies from all around Oregon are coming to YOU mid-April to celebrate our friend's last days of being single.” In response, Jen F recommended Velvet, Astro Lounge, Seven and Cycle Pub.

For those unfamiliar, Cycle Pub combines two big parts of sightseeing—cycling and drinking—allowing patrons to do both on the same vehicle, within a 2-foot radius of friends. In what can only be described as a 20 seat, pedal-powered, slowly moving trolley car, Cycle Pub takes to the streets, stopping occasionally at breweries to refill, blocking traffic in the most fun-loving way.

John Flannery, a partner at Bend Tour Company who operates Cycle Pub, explains: “We do see quite a few bachelorette parties. Many are for Cycle Pub, but others head out on electric bike tours and rentals or take Segway or Electric Cruiser Car tours. Guessing the number of bachelorette parties Bend Tour Company sees is tough, but I’d say a couple hundred across all of our offerings.”
With all of those parties, funny stories abound.

“The group I thought was the funniest wore “Bride to be” t-shirts and made people guess which one was really the bride-to-be when in reality, they were all getting married that year,” Flannery recalls.

When asked about statistics on a noticeable increase of pre-wedding female celebrations in Bend, Tawna Fenske of Visit Bend noted, "We don’t track bachelorette parties (which is probably good news to the ladies attending them!) but we can say the Bend Ale Trail has become a popular attraction for women traveling to Bend for weddings, girls' weekends and bachelorette parties."

Bend Ale Trail is essentially a self-catered Cycle Pub, minus the pedal-powered trolley car. Think of it as a marginally classier, hop-influenced pub crawl.

Still, some women are definitely the “un-bachelorette” style party girls, who might want a quiet night instead of the big flourish. Party buses, phallic cakes and fruity drinks aren’t for everyone. One local blog post described a quiet night at a local Airbnb, dinner at a nice restaurant, wine spritzers and star gazing—ideal for those who aren’t the party type.

A night people dream about

Though a popular misconception, most believe all females plan their weddings starting in childhood. In truth, the “hens’ night” is the truest main event. What’s not to like? It’s essentially the most amazing birthday, times 1000, and the celebrant and her guests get a pass on most of their typically socially unacceptable behavior. (Oh, and any of these ideas can work for a bachelor party, too.)

Lewd behavior aside, Flannery advises, “no matter what activity you choose to partake in, after having fun, the best pictures do not have you holding numbers up.” In other words, it’s best if the bachelorette (or bachelor) party doesn’t end in an arrest.