n his tax speech in Pennsylvania this month, President Trump gave a shout out to "The great Jeffrey Lord."He went on to explain that Lord "was on fake news CNN for a long time. He was one of my few sources of truth."

CNN severed ties with Lord after he tweeted "sieg heil," a Nazi salutation.

Trump's flirtation with racism is nothing new—it extends back through the campaign and into many facets of the presidency. He called the white supremacists in Charlottesville "very fine people" and has repeatedly refused to condemn hate groups. But the precise mechanisms by which the administration and ally media outlets such as Breitbart act as bridges to normalize hate groups is becoming increasingly clear.

This month, Buzzfeed's massive story on right-wing provocateur Milo Yiannopoulos shows that he sent at least one major Breitbart story to a number of white supremacists to vet and line-edit. In a video embedded in the story, Richard Spencer and others gave a Nazi salute as Yiannopoulos sang "America the Beautiful" at karaoke.  Milo even spiked a story at the suggestion of white nationalist Devin Saucier, a friend of Spencer's.


Yiannopoulos was forced out of Breitbart after an old tape in which he appears to condone pedophilia came out, but he has remained in contact with the major funders to the site, the billionaire Mercer family, which funded Milo Inc.

Bannon, who had declared the Mercer-funded Breitbart a "platform for the alt-right," left the site to run Trump's campaign and work as a senior advisor to the White House, and returned to the site when he was ousted shortly after the white nationalist terror attack in Charlottesville.

"Dude—-we r in a global existentialist war where our enemy EXISTS in social media and u r jerking yourself off w/ marginalia!!!!," he wrote to Milo. "U should be OWNING this conversation because u r everything they hate!!! Drop your toys, pick up your tools and go help save western civilization."

"Western civilization" is often code—for people like Bannon and the far-right (see footnote) fraternity, the Proud Boys—for whiteness. But it is less offensive, and less likely to scare away potential converts. 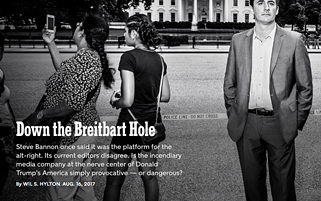 In his New York Times Magazine story on Breitbart, Wil S. Hylton (full disclosure, a friend) talked to Yochai Benkler, a professor who had been studying the site's rise.

Breitbart, it turned out in Benkler's study, was three times more influential than its closest rival, Fox News, during the 2016 election. In this way, it has, according to Benkler, served as a sort of filter that helps legitimize racist ideas. Benkler told Hylton that "Breitbart is not talking about these issues in the same way you would find on the extreme right...They don't use the same language you find on sites like VDARE and The Daily Stormer'' — two sites connected to the white-nationalist alt-right movement.

But they are talking about those same issues, and it turns out that the fact that they don't use the same language as Daily Stormer is what makes Breitbart effective as a "bridge" that, in Hylton's words "functioned as a legitimizing tether for the most abhorrent currents of the right wing."

Now that we know that Yiannopoulos actually sent "his" Breitbart stories (which were actually often not written by him) to Andrew "Weev" Aurenheimer, who works at the Daily Stormer, the bridge phenomenon comes off a bit differently.

"What we saw in our larger scale analysis was that Breitbart was offering a bridge, a translation platform from the white nationalists to the rest, but that the language and framing was sufficiently different to not be read directly as white nationalist," Benkler responded in an email when I asked about the Milo story.

Trump himself has often acted as a similar kind of bridge. Although he first endorsed Luther Strange to fill Attorney General Jeff Sessions' old Senate seat in an Alabama special election, Trump has now come around to fully supporting Roy Moore, the theocratic former Alabama judge twice removed from office for failing to recognize the rulings of a higher court.

But Moore is himself acting as a bridge for even more extreme figures.

As Talking Points Memo reported last week, Moore's top supporter is Michael Peroutka, which the site described as a "hardline Confederate sympathizer with longtime ties to a secessionist group" who has "expressed beliefs that make even Moore's arguably theocratic anti-gay and anti-Muslim views look mainstream by comparison."

Peroutka, a secessionist and debt-collection attorney, ran for president in 2004 for the Constitution Party. In 2014, he ran for the county council in Anne Arundel County, Maryland, and was supported by Moore, whom Peroutka has honored by naming a field on his farm for the Alabamian. In 2012, Peroutka asked attendees of a League of the South conference to "stand for the national anthem," and proceeded to play "Dixie."

So as the President and his administration continue to throw fits about athletes "disrespecting the flag," by taking a knee during the national anthem, they are actively supporting or receiving support from racist extremists who support either the Nazis or the confederacy.

Note: After writing about the Proud Boys (in versions of this story that were published elsewhere last week), Democracy in Crisis got a cease and desist letter from the Proud Boys' lawyer, complaining that the column described the "western chauvinist," "far right," "fraternity" as "alt-right."

When they say "western chauvinist"™ instead of "racist" they say they are claiming only "the west is the best" and not that white people are the best. They often point out their few minority members. They think they may be able to draw these lines wherever they want and separate themselves from the "alt-right." They think they can control the narrative.

A lot of publications decided to change the word "alt-right" to "far-right" or something similar in order to avoid spending time and legal fees debating this. I myself feel like "the litigious alt-lite" is now a far more accurate phrase for these guys. Like Mike Cernovich and all of the other people who want to be able to say hateful things while simultaneously denying they are hateful people. So consider this a correction.