Non-alcoholic beer drinkers resigned to drinking lagers and light beers, check it out: Deschutes Brewery is going dark for you.

On July 8, Bend's oldest craft brewery released a non-alcoholic Irish Stout—offering a style of N-A beer that, while not unique among the non-alcoholic beer options out there in the world, is not a style that has been widely adopted by other N-A beer makers elsewhere. N-A Stouts are the fringe of this fringe market, if you will. 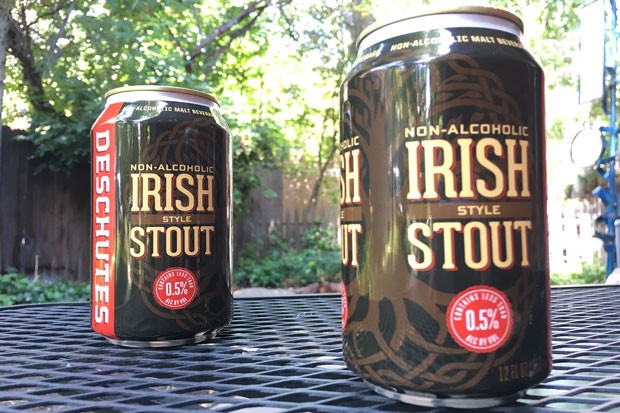 A press release from the brewery describes the beer as "a traditioN-Al Irish-style stout with coffee-like roasted malt character, light chocolate and a dry, light bodied drinking experience."

The Source drinking team checked out the new beer this week, delighting in the fact that we didn't have to wait 'til the end of the day to sample it (having a buzz on while publishing this paper can lead to more than a few spelling errors...). Our crack team of beer lovers resoundingly gave the Deschutes N-A Irish Stout a thumbs up. It has a smooth mouthfeel, with a creamy texture, and pours out of the can with a frothy head. With a total alcohol content of half a percent, we could easily see this being a yummy beer to put on a nitro tap, to be enjoyed by desigN-Ated drivers and general beer lovers alike.

And with so many more people choosing to refrain from alcohol these days, developing this product is well-timed. In a study by Berenberg Research, researchers found that study participants in their teens and early 20s were drinking more than 20% less per capita than millennials. In turn, millennials also drank less than baby boomers and Gen Xers did at the same time in their lives, as Business Insider reported in 2018.

And in a beer industry with flat or declining sales, the companies seeing growth are the ones offering N-A products. The non-alcoholic category had grown at 3.9% per year on average for five years compared with regular beer sectors, The Wall Street JourN-Al reported in 2019. At Deschutes, its product development team is no stranger to that trend.

"This has been a passion project for me," Veronica Vega, new product development director for Deschutes, stated in the release. "It is a way for us to connect with a growing population of people, including young people, who are looking to reap the health benefits of an alcohol reduced or alcohol-free lifestyle and still enjoy the act of drinking beer."

Having a local option for N-A beer—and dark N-A beer at that—is a potential game-changer for Deschutes. Thus far, N-A options among Oregon beers are few and far between, and N-A beer drinkers we talked to say the best options still largely come from Germany, where N-A beers are increasingly popular even among those who also imbibe in alcohol.

Those who want to try out the N-A Irish Stout can contact Deschutes Brewery directly at the company website, where it's offering direct-to-consumer sales for this beer. According to its press release, the company is going to spend some time gathering feedback from customers who order the beer before releasing it more widely later this year. The N-A Irish Stout is also available at Deschutes Brewery pubs and tasting rooms. Ordering is available at deschutesbrewery.com/beer/non-alcoholic-stout/.