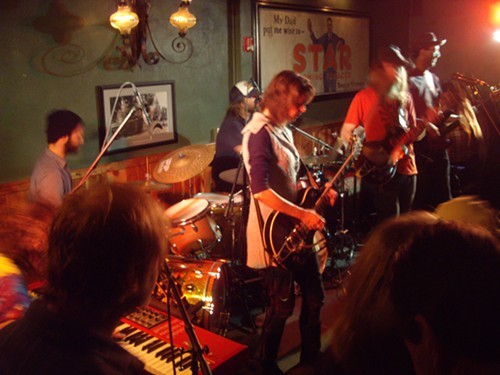 It was a school night in 1971, and I was a junior in high school, living in a town of about 11,000 in southeast Kansas, a long ways from most everywhere. A buddy who was the first in our small band of bros to buy a “good” stereo system invited us over to his upstairs bedroom to show it off. As we marveled over the super-cool JBL speakers with the super-tactile, black foam waffle covers, he dropped the needle on side one of The Allman Brothers Band Live at Fillmore East. He cranked it up and the whole house seemed to shake. The album was recorded on March 12-13, 1971, and released just a few months later, in July. We had never heard anything like it, and 43 years later, it’s still one of the best live rock n’ roll albums ever recorded.

So when I see that a band called Brothers and Sister, dedicated to recreating this album, is playing a free show at McMenamins Old St. Francis School, it’s enough to get me out of my east side casita on a rainy Wednesday night.
I didn’t go expecting a lot, but I just had to hear it for myself. Plus, I was curious to see just how many Allman Brothers fans there might be in Central Oregon. Man, was I surprised. The place was packed! Music lovers—many my age and older—spilled out into the hallway outside both doors, as Father Luke’s Room was filled shoulder-to- shoulder.

When I arrived just after 7 p.m.,the band hadn’t started yet, so I got in the beer line in the Fireside Pub. Imperial IPA in hand, I managed to squeeze through one of the doors and shoehorned my place into the back of the room. It was hard to glimpse all of the band members, but the sound was good, not too loud. I remained there throughout the band’s first set, though my feet, after being on them a good chunk of the day, began to pain me. Shifting from left to right foot, and dancing in place helped, but my doggies were still sore.

For the set-closer, I was thrilled to hear the band break into the instrumental, “In Memory Of Elizabeth Reed.” My curiosity was somewhat satisfied, and better yet, I got to hear the band’s faithful rendition of my all-time favorite Allman Brothers song. But my feet were still killing me, and I briefly considered heading home. However, walking felt better than just standing still, so I hoofed it across the parking lot to the uncrowded O’Kanes cigar bar. I ordered a pint of stout and found a chair outside by the raging fire pit, where I rested a bit before going back, somewhat recharged.

The band was getting in place, and for its second set I made my way down front, stage right, directly in front of a speaker. The ear plugs that I’d remembered to slip into my pocket before leaving the house came in handy. I was now afforded a closeup view of the band, with the exact configuration of the Allman Brothers Band—two guitarists, two drummers, bass and organ.

These veteran, Portland-based musicians were led by guitarist Anita Lee Elliott who calmly took on the slide guitar parts of the late, great Duane Allman. Most mortal men would not even consider such a herculean task, but this guitar slinger oozed confidence and her nimble fingers took us all back to the Duane days. She soloed impressively on the 20-minute epic, “You Don’t Love Me.” The other band members clearly had a fun time, too, joyfully tearing through their second set.

Brothers and Sister were going to return for a third set, but I was sated. In the hallway outside the restrooms, I ran into one of the drummers and complimented him on the band’s sound. I told him to have a good tour, and walked out into the rain, which had picked up, while the rumbles of “Whipping Post” played in my head.