Roasted in the oven or cooked on the stovetop, these Brussels are tender, creamy and full of flavor

Seems like folks either love ‘em or hate ‘em. I’m talking about Brussels sprouts, which in recent times have evolved from those smelly, mushy things we were forced to eat as kids to very popular menu items at restaurants everywhere. If you’re in the love ‘em crowd, you may already have a go-to Brussels recipe. If you’re in the hate ‘em crowd, here’s your invitation to give them another try. 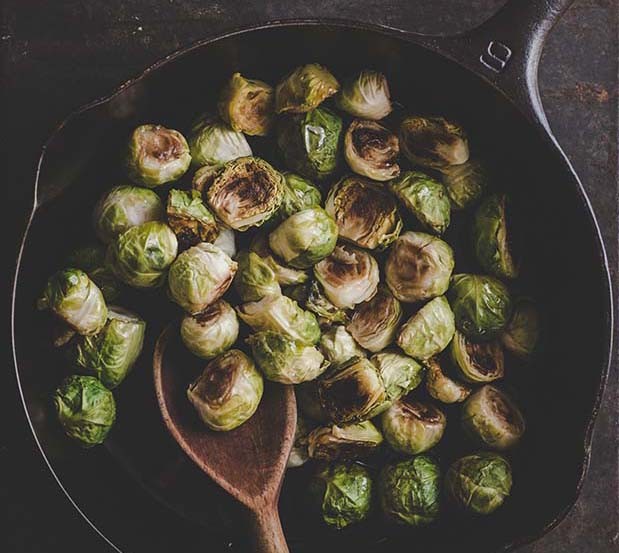 Brussels, which are in season now, are in the cabbage family which means they’re full of vitamins, especially C, K and B vitamins as well as minerals such as iron and manganese. They’re also a good source of fiber. Of course knowing that something is good for you doesn’t mean you want to eat it. It really comes down to the taste and texture.


If the cabbage taste is too bitter and off-putting for you, these two recipes could be the remedy for that. Whether you choose to roast them on a bed of sugar to sweeten the flavor or slowly cook them on the stovetop with lemon, butter and herbs, both of these recipes mellow out the cabbage harshness. And both recipes give you tender and creamy Brussels that aren’t too soft.


Whether you choose to roast them on a bed of sugar to sweeten the flavor or slowly cook them on the stovetop with lemon, butter and herbs, both of these recipes mellow out the cabbage harshness. And both recipes give you tender and creamy Brussels that aren’t too soft. tweet this

It’s important that you wash and trim the little sprouts before you cook them. After rinsing them in a colander, pull off any dead or discolored leaves and cut off the hard bottom stalk part. You could leave them whole if they’re small enough but cutting them in half is usually the best technique, allowing them to lay flat in the skillet or on the baking sheet.

-Chopped herbs of choice, as desired

Heat olive oil in a large skillet over medium-low heat. Add Brussels cut side down in a single layer (you may have to cook in batches). Sprinkle with salt and pepper. Cook slowly (turn heat to low if necessary), not stirring, until browned and caramelized on one side. Add garlic, thyme, and lemon juice as you carefully turn Brussels over. Once browned on other side, stir in butter until completely melted. Add more chopped thyme or other herbs of your choice before serving.

-A few pinches of sugar, granulated or raw

Preheat oven to 375 degrees. Drizzle a large roasting pan or baking sheet with olive oil. If you’re doing a small batch, you can use a large cast iron skillet instead. Sprinkle sugar on the pan in a thin layer, covering the pan completely. Place the trimmed Brussels, cut side down, on top of the sugar layer. Roast for 30-40 minutes, turning the sprouts at least once during the baking time. They should be dark brown, almost black, when done. Sprinkle salt on top and serve immediately.