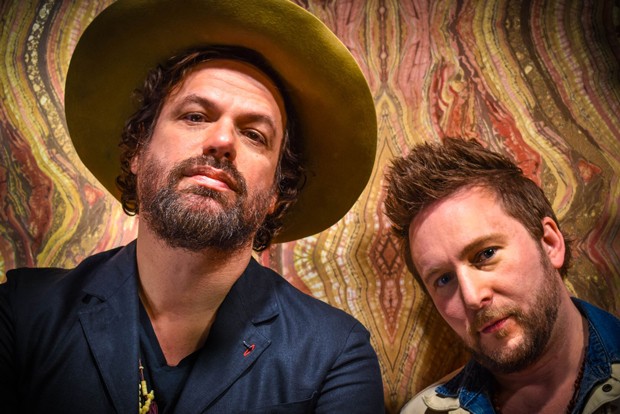 Michael Glabicki and his band Rusted Root's biggest hit, "Send Me on My Way," first appeared on the 1994 album, "When I Woke." Now, more than 20 years later, Glabicki and Rusted Root's longtime guitar player and background vocalist Dirk Miller are on the road playing re-envisioned versions of the band's biggest hits. A true career musician, Glabicki also brings new songs on the road, ahead of releasing them on a future album. With the new songs, Glabicki strives to be completely honest and to challenge himself as a songwriter.

"I think it's gotten a lot more personal, a lot more brutally personal," Glabicki says. "Trying to be completely honest. Songs are great like that, because you can say whatever is on your mind even if it's partly insane. Some people understand it and some people have the same thoughts at different times."

Recently married, Glabicki's new material also focuses on personal relationships. He's tried to incorporate a more communal writing style where he writes for both himself and the audience—admitting that he had that ability early on in his career and now recaptures that energy in his current songwriting.

With Rusted Root on hiatus, Glabicki sees his new material, with Miller by his side, eventually being released under the 'Michael Glabicki and the Uprooted Band' moniker.

"There's a new level of fearlessness on this last tour and I think it gets down to fear of death and it gets down to that level when you really let go of any safety nets musically," Glabicki confesses. "I think dying up on stage is a really real profound thing that I've feared before. Just sort of completely messing up on stage. I think with this new band, the Uprooted band, I've found people around me that really support what I do and are very talented to be able to do it. There's this new level of trust opening up for me and with the audience, too. I think the audience has been experiencing something new out of that all."

For years, Glabicki says he tried to be more extroverted on stage and never felt like it worked for him. Focusing more internally while performing has put him in a space that works for himself, Miller and the audience.

"I feel like the deeper inside I go, the more the crowd comes into it with me," Glabicki says.

Glabicki also feels he and Miller have gotten pretty psychic together on stage.

"I can pretty much not think at all and just play and get into these unknown landscapes, just knowing that he has my back and it's not going to fall apart," Glabicki says of performing new renditions of Rusted Root songs with Miller. "And we're exploring these beautiful new areas to go into, and it's almost like a different song."