As the snow starts to fly and the wind picks up into its November-level bluster, lots is still going on at the construction site near 8th Street and Bennington Lane in Bend. Roofs and windows are already installed. Siding is nearly complete. Inside, some units are already covered with wallboard—a sure sign that the project is nearing completion, with five new homeowners soon to move in, finally realizing that most basic of American Dreams.

In the case of Crescita, the new five-unit cottage cluster developed by Kôr Community Land Trust, the American Dream includes an energy efficient, net-zero home with one upstairs bedroom, two bathrooms and another flexible office/small bedroom on the ground floor, all for a fraction of the cost of the typical Bend new-construction home. By leveraging community donations and the community land trust model—where the home belongs to the owner, but the land remains in the hands of the trust—people for whom homeownership has been out of reach will soon make these places their own. 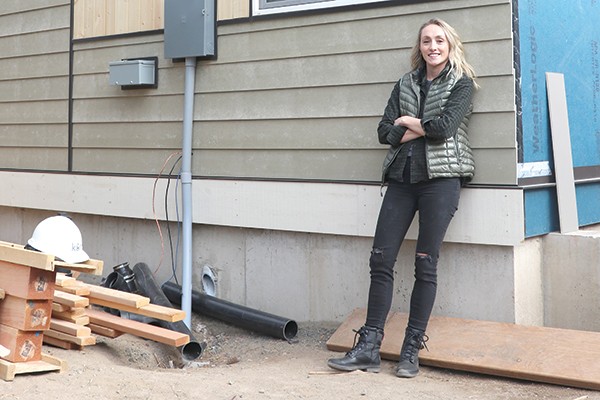 "These homebuyers have been selected—the majority of them are local workforce," said Jackie Keogh, Kôr's executive director. Among the new homeowners at Crescita are public sector employees and a member of the local media, all earning somewhere between 60 and 120% of the Area Median Income—about $67,973 in Bend, according to the most recent U.S. Census data.

With the other projects in the pipeline, Keogh said the focus will be on homes that can accommodate bigger families or those desiring to live in multi-generational homes.

"We have seven homes being built in southeast Bend—all of them will be three bedrooms and net zero. We'll be selecting homeowners for those in mid-year of 2023, and they'll be moving by the end of the year," Keogh said. "Kôr's goal is not just building for the community but with the community, and what that really means is resident-driven design."


Meanwhile, Kôr is working on the largest affordable homeownership community ever for the city of Bend, on Simpson Avenue, on Bend's west side.

The location on the west side is a priority for Kôr, which prizes geographic diversity and the ability for homeowners to have the same access to quality schools, walkable downtowns and other attractive amenities that any other homeowner would look for, Keogh said.

"This is a really new idea in the sense that, when folks go to purchase a home, they typically displace themselves because they have to move further outside of the city core, and with that displacement comes longer commutes to work, change in child care, change in school districts. Our idea is for that not to happen, so that's why the Simpson site is so important to us," Keogh said. "Kôr is going to be building 37 affordable, single-family, two and three-bedroom homes there, next to Housing Works' 59 units of Section 8 housing, with the idea that we will give preference to those Section 8 clients who are able to move into ownership—essentially opening up a rental spot and also helping a local resident with the Section 8 advance through what we call the continuum of affordable housing."

With the launch of the Source Weekly's Central Oregon Gives this week, donations given to Kôr between Nov. 9 and Dec. 31 will go to the construction of a Kôr home, with all donations to be matched by a local family to raise a total of at least $50,000. That $50,000 is something of a "magic number," representing the gap between the cost to build each home and what the local workforce can currently afford. So in that sense, Kôr's efforts are quite literally "building a community" in, for and with Bend.