Transportation, heating and cooling are some of the largest contributors to air pollution. Here's what some local entities are doing to resize their carbon footprint

According to the Environmental Protection Agency, transportation and the burning of fossil fuels to heat and cool our homes and businesses are some of the biggest contributors to air pollution in the U.S. Local builders, schools and governments are taking aim at reducing their carbon footprints—and some are winning awards while doing it. 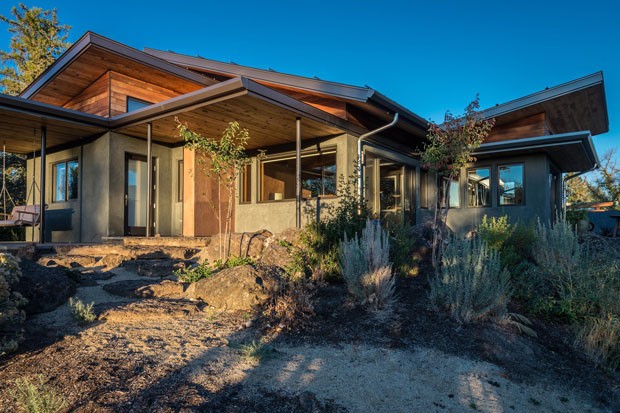 
In 2014, Timberline Construction of Bend was the Green Builder Media's Grand Overall Winner with its "Desert Rain" project. The house, located in the Old Bend neighborhood, was the first residential project in the U.S. to meet the rigorous requirements of the Living Building Challenge—which are buildings that generate more energy than they use, capture and treat all water on site, and are made using healthy materials—according to the International Living Future Institute website.

To capture all the water onsite—because Bend only receives an average of 9 inches of rain per year—the build required enough roof area and storage capacity to supply eight people with water, and wastewater needed to be managed onsite. Since the home is on City sewer, the homeowners had a wetland constructed that handles grey water—waste water from kitchen appliances, sinks and baths—and a series of vacuum-flush toilets, central composter and a solar evaporator for solid waste.

James Fagan, Timberline's founder and owner, said that although the company isn't currently working on any projects to the sustainability level of "Desert Rain," he encourages clients to build as many green builds into their homes as possible. Fagan also said that more and more people are knowledgeable and interested in green building, but government needs to support sustainability with incentives and tax breaks.

Fagan recommended people who don't have the budget to do a project like "Desert Rain" to do an evaluation with Energy Trust of Oregon and at least tighten up the building envelope. Fagan also said light emitting diode (LED) lighting is an inexpensive, big energy saver.

"We have all the technology which is being improved all the time as well," Fagan said about going green. "I try to encourage folks to do something. Everyone can't do "Desert Rain" but we can all work toward that. I live in a small remodeled mill house and added features that make us net zero energy. It can be done."

Last year, architects from Bend's Shelter Studio won Green Builder Magazine's Home of the Year award for the design for the "Rowe Toogood Residence" on the Deschutes River. According to a story on Oregonlive, the Energy Trust of Oregon gave the home an energy performance rating of 8 out of 10. The home has 24 solar panels, LED lighting and Energy Star appliances. Extra insulation and other energy-cutting measures have the homeowners paying under $10 a month for power in the summer and under $100 in the winter, the Oregonlive story said.

Net zero may sound good, but what does it cost?


According to the Zero Energy Project, a nonprofit educational organization in Bend whose goal is to help homebuyers, builders, designers and real estate professionals take meaningful steps toward radically reducing carbon emissions and energy bills by building zero net energy homes and near zero energy homes, the cost is not that much. The organization says even when zero-energy homes cost 5 to 10 percent more to build than a comparable home, they will cost less to own. 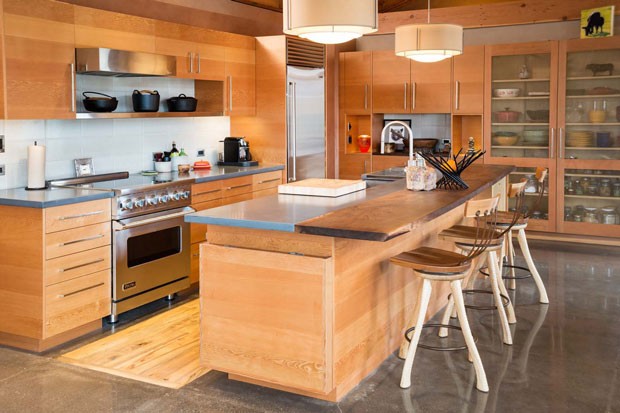 Zero Energy Project has strategies for building affordable zero-energy homes. According to ZEP, the average new home in the U.S. is around 2,400 square feet. One way to offset the cost of zero-energy features is to make the home smaller. For example, if the home was 300 feet smaller it would save about $45,000—enough to pay for the entire up-front costs for a zero-energy home, ZEP wrote.

Taking advantages of tax credits, cost consciousness when selecting finishes, using solar energy and looking for banks that offer Energy Efficient Mortgages are other ways to save when thinking about going green, according to ZEP.

Currently at the federal level, there is a 30 percent renewable energy tax credit for things like geothermal, solar and small wind turbines in service by the end of the year. The Oregon energy incentive programs sunsetted at the end of the 2017 tax year; however, there are still federal incentives for buying energy efficient appliances. Some municipalities have sustainable energy incentives, as well.


Efficient homes can save renters money, too—but the number of new green-certified rental units in large-scale buildings dropped for the second year in a row, with 42,900 units delivered last year, according to RENTCafe website. However, even with the two-year decrease, it's still a 283 percent increase from 2008. According to RENTCafe, Portland has the fifth-most green rental apartments in the U.S., with 11,500 units. Chicago tops the list with over 20,000 units.


Oregon State University, with its signature orange and black school colors, could be considered green-phobic—at least when it comes to sports—as the rival of the yellow and green University of Oregon Ducks. But the planned expansion for OSU-Cascades has a lot of green elements in it.

To get to net zero water use, Steve Pitman, director of facilities and operations for OSU-Cascades, said the college doesn't want to use more water on its site than will fall as precipitation in a year. To get there, Pitman said the school would have to do some degree of water treatment—either just gray water or waste water from toilets, which would need an on-site water treatment plant, which could get complicated and expensive.

Currently, the school is working on adding native plant species that lessen the need for irrigation. Pitman said the school would work on a reclaimed water system to be able to flush toilets with reclaimed water and other conservation features, to make the overall water consumption number the lowest, so the treatment would become more affordable.

Pitman said the school just selected a designer for the new academic building that's set to be ready to use by the 2021 school year. The design focus for the new building is to simplify and change the way the buildings are used to use less energy, Pitman said. But design alone won't get the school to net zero. Pitman said they also need a strategy to produce energy, as well.

One of those is a geothermal system, which essentially uses groundwater as a source of heat or cooling. According to Pitman, a geothermal system takes heat out of the ground or groundwater and moves it into buildings. These types of systems are more energy efficient, Pitman said because the energy used is in moving the heat, not creating the heat in a typical system like a furnace.

Pitman said the upfront cost of geothermal is expensive, which is why the first three OSU-Cascades buildings don't have it, but the new building is going to have it and the intent is for the whole campus to use geothermal in the future.

"To be using that geothermal system for the majority of the heating and probably all of the cooling, and then the last pillar is the renewal energy plan is solar energy or whatever else we need to get to that zero in our master plan," Pitman said.

Pitman said most OSU students either have a car, or have access to one—and he doesn't blame them with all of the outdoor opportunities Bend has to offer.

"Our challenge is how do we get folks who live further away—or all the spaces in between—how do we get them to somehow take advantage of transportation options that at least limit the number of private vehicles," Pitman said.

One way to reach this goal, Pitman said, is to provide special parking for carpooling on campus. State policy is to charge for parking on campus, partially as a way to discourage people from driving and consider other transportation options. Also, university employees and students have free access to bike-share bicycles on campus, Pitman said. The University of Oregon, which has many old buildings, is working on energy efficiency as well. According to the university, they've replaced many of the old buildings' lighting with LEDs and all new buildings are required to be 25 percent more energy efficient than the 2014 state energy codes, which set a benchmark for energy efficiency targets.


This month, the City of Bend received a $60,000-plus grant from Pacific Power to help with the installation of 360 solar base-mounted modules at the City's water facility off Skyliners Road.

According to the City, the solar modules are expected to generate about 195 megawatt hours of energy per year, creating a savings of about $12,000 per year in energy costs. The project will also help the City reduce its carbon footprint, by lowering emissions by nearly 180,000 pounds per year over 20 years.

"We are very grateful to receive this award that allows us to use alternative energy sources and benefit our operations," Paul Rheault, City of Bend utility director, said in a press release. "This works toward our goals to increase the sustainability and energy efficiency of our operations and save money for our ratepayers."

The project is one strategy to help the City reduce fossil fuel use at its facilities, which are part of the City's climate action goals. Other parts of the climate action goals are to reduce carbon dioxide emissions from City facilities and operations to achieve carbon neutrality by 2030 and reduce fossil fuel use by City facilities and operations by 40 percent by 2030 and 70 percent by 2050.

Construction for the solar panels on the water filtration facility is scheduled to begin this spring and be completed by the end of the year.