For those who've wondered what inspires someone to tow trailers and tutus into the Nevada desert for eight days at the end of August every year for Burning Man, now is the chance to understand it. The High Desert Museum brings this unique annual event and the creative forces behind it into perspective with the exhibit, "Infinite Moment: Burning Man on the Horizon."

Along with some fun interactive art pieces, the exhibition lays out a fundamental understanding of the cultural phenomenon happening since 1986. 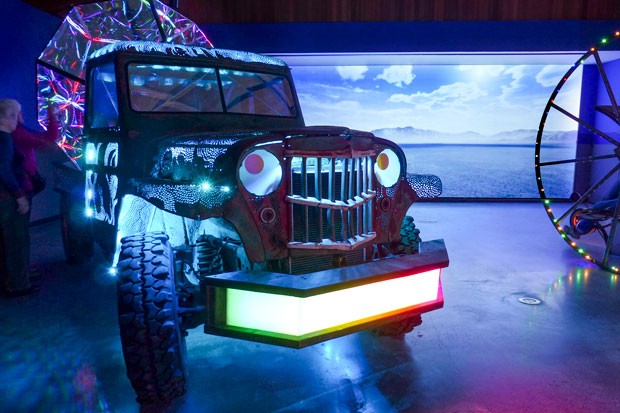 "The high desert is such an important part of the experience of Burning Man, and we want to connect people to the land and what to experience in it," says curator Laura Ferguson. The main room of the exhibition gives one the feeling of being on the "Playa," the center of Burning Man's Black Rock City, with its interactive multi-media sculptures. That includes "Light Chimes" from Portland's Sticky and Co., as well as original pieces created by the Burning Man curation team.

One piece is a projected animation that comes to life as visitors sit in the corresponding sculpture: a three-seat wheeled vehicle. While the vehicle doesn't move, the screen in front does, offering the illusion of riding a bike across the playa. Next to it is Ghost Truck One, created by the High Desert Museum with L.A. artist Jesse Small, who plucked the front of the truck from a field in Terrebonne, creating a delicate, hand-done pattern that almost looks like lace. On the back is a dodecahedron filled with mirrors and lights that gives a feeling of infiniteness.

"The more you explore it, the bigger it gets," says Dustin Cockerham, curator of the exhibit.

The main room of the exhibition give you the feeling of being on the “Playa,” the center of Burning Man’s Black Rock City. tweet this

At the doorway is a pay phone inspired by the long-running Burning Man installation called "Talk to God," where listeners can pick up the receiver and speak to a person on the other end of the line.

The exhibition will be on display until October, with several events running on conjunction with it, including a lecture with a representative of the Burning Man Project on April 30 and a presentation by Portland-based photographer Stewart Harvey, whose work spans 30 years of Burning Man. Harvey is also the brother of Burning Man founder Larry Harvey.