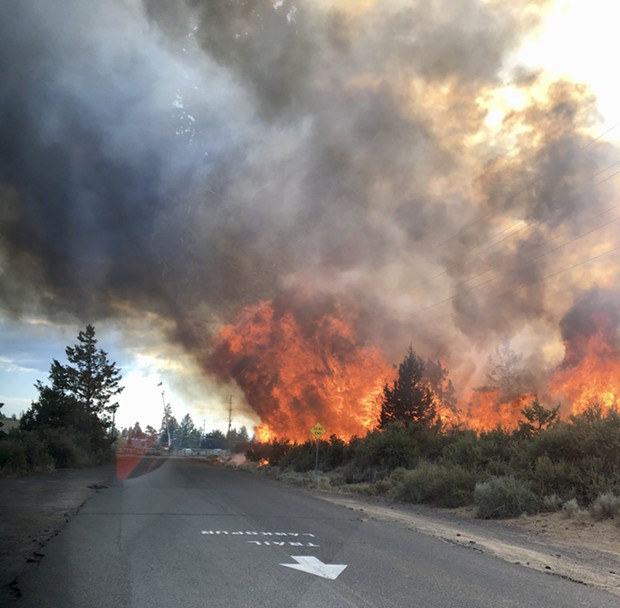 The annual fireworks display at Pilot Butte often ends with a small brush fire resulting from the professional pyrotechnics—which usually gets put out quickly by the Bend Fire Department.

Cops believe two men are responsible for the blaze. Brandon Joel Hastings, 38, and Alan Joseph Stout, 29, allegedly lit a firework at the Pilot Butte State Park trailhead around 5pm July 4th, then left the scene. According to a release from the Bend Police Department, officers found Hastings in Redmond around 10pm Wednesday, charging him with Criminal Mischief I. Police found Stout about 11am Thursday in Bend, charging him with Criminal Mischief I, Reckless Burning and a Felony Probation Violation, and lodging him in the Deschutes County Jail.

The fire that resulted from the illegal firework burned 10 acres along the base of the butte, according to the Bend Fire department. Police said the fire also caused the evacuation of the Outlook at Pilot Butte apartment complex. The U.S. Forest Service assisted BFD with three, five-person hand crews, one officer and two engines. Oregon Department of Forestry also assisted with two engines and one officer. A crew of 45 fought the fire, according to a statement from BFD.

About 27,000 people were without power across Bend until it was restored about 7pm, according to KTVZ.

Cops said Deschutes County 911 got a call that someone heard fireworks about one minute before the fire started. They also received descriptions of two vehicles leaving the area around the same time the blaze got going. Two people in the apartment building either took photographs of the cars or had detailed descriptions of the suspects, Bend PD said.

Even with the frightening scene that took place in the afternoon, the real firework display went on as usual a bit after 10pm.

BFD’s Dave Howe said people who use fireworks—either legal or illegal—can be responsible for the costs of any damage caused and the cost of suppressing a fire. Case in point: The teen who started the Eagle Creek Fire in the Columbia River Gorge with a firework was ordered to pay a $36.6 million fire for the damage caused.