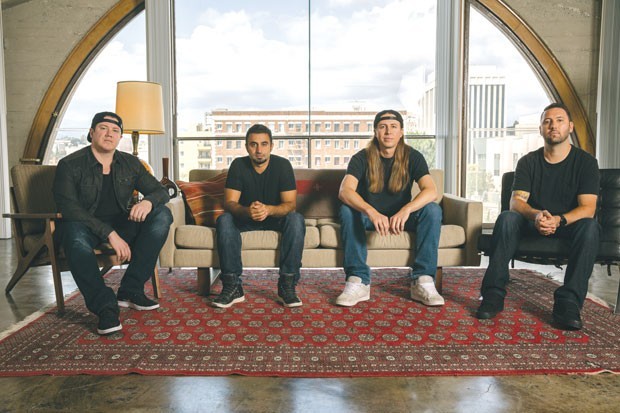 Rebelution's previous album, "Falling into Place," gave the group a new form of recognition when it earned the band its first Grammy award nomination.

The nomination for Best Reggae Album was a further indication that the California-based band has become one of the leading acts in the crowded Cali-reggae genre that has exploded in popularity over the past decade.

While it was certainly a feather in the band's cap, singer/guitarist Eric Rachmany doesn't see the Grammy recognition as having had that much of an impact on Rebelution's career or how the group goes about its business.

"For me, it's not really that important to win any sort of awards, but I think because of that, I think it opened some eyes," he said in a recent phone interview. "But to tell you the truth, I don't think we've ever had one song or one album that propelled us to a new level. It's always been a steady increase with Rebelution. To this day, we really feel like our music gets spread by word of mouth."

The group took a do-it-yourself- approach, self-producing a self-titled 2006 EP, followed by its first full-length album, "Courage to Grow," in 2007, which was released through the California-based music collective, Controlled Substance Recordings.

"It's always been a steady increase with Rebelution. To this day, we really feel like our music gets spread by word of mouth." —Eric Rachmany tweet this
Despite not having a high-profile record label, the album reached No. 4 on "Billboard" magazine's Top Reggae Albums chart. The group's next album, 2009's "Bright Side of Life," did even better, topping "Billboard's" Top Reggae Albums chart, setting the stage for the next two albums, "Peace of Mind" and "Count Me In," to not only extend the string of No. 1 reggae albums, but debut in the top 15 on "Billboard's" overall Top 200 chart.

"Falling into Place" became the fourth-straight Rebelution album to reach No. 1 on the Top Reggae Albums chart, and stayed on the chart for 60 weeks. It didn't fare quite as well on the Top 200, debuting at No. 32. Still, the Grammy nomination confirmed that the 2016 release was yet another success.

Rachmany said being nominated for the Grammy didn't add any pressure to the making of the group's sixth studio album, "Free Rein," released June 15. But the band put extensive effort into the project, and Rachmany says it's his favorite album.

"It definitely wasn't a simple, fast process," he explained. "I mean, we spent a year and a half to two years just working on these songs, from the demo versions to the final product. Yeah, I really feel like this is a great representation of our work."

The band's ambition and confidence are evident in the "Free Rein" project. As always, Rachmany was the lead songwriter for the project, but he stepped up his involvement in the studio by producing all but three of the 11 tracks with able assistance from engineer Keith Armstrong.

"I think we kind of missed being a little more hands-on with the process, and that was one of the main reasons why we wanted to produce this ourselves," Rachmany said.

"Free Reign" leans strongly toward reggae ("Celebrate," "Rise On Top" and Settle Down Easy" fall squarely in that style), but also branches out on the acoustic ballads "Healing" and "Constellation," and another track, "Trap Door," that leans more toward R&B and rock. Rachmany hears some elements of Rebelution's earliest music in the new album.

"I think that this album might be a little bit less produced than 'Falling Into Place.' That might be why it sounds a little bit more rootsy, like our first two albums, 'Courage To Grow' and 'Bright Side of Life,'" Rachmany said, commenting on the musical direction of "Free Rein."

"I think that this album still has a lot of bit of different stuff. But I do think the songs that have more of a reggae groove were engineered, mixed and mastered in a way that was very similar to our old stuff. So I do think we kind of went back a little bit to that sound."