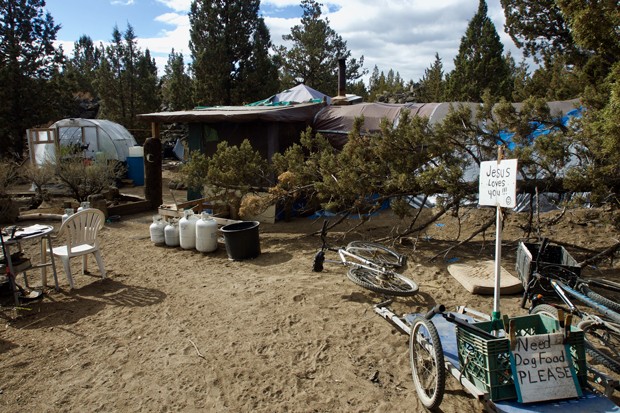 Traveling along the bumpy, dusty roads that weave through the property owned by the City of Bend and the Central Oregon Irrigation District, you might see remnants of tents, tarps, a few cars and piles of household items. You'll also see creative engineering—a house made out of tarps and old crates and a greenhouse full of tomato plants. And people.

Juniper Ridge, the nearly 1,500-acre parcel of land north of Cooley Road that the City of Bend has owned a portion of since 1990, is currently home to about 25 homeless camps, according to police. People who own homes around the area say it's becoming a lawless area with drug needles, feces and trash piling up. City Councilor Bill Moseley likened the area to a refugee camp at the Sept. 19 City Council meeting.

"What we need is for the City Council to pass a measure allowing the sheriff's office to enter the area and to have regular patrols of the camps," a woman who lives near Juniper Ridge and asked not to be named, said in an email. "This will avoid displacing the people living in the area and will offer us immediate support. The City of Bend must treat this property responsibly and take care of it."

Bend Police Department Chief of Police Jim Porter says his officers proactively patrol the area—owned about 50-50 between the city and Deschutes County—but homeowners nearby say they want more.

"What they're asking about is not so much patrol, but how do you move them out of here, is what they're asking," Porter said. "And the answer is, it's complicated and a lot of it is beyond our control at a policing level."

Moseley and others are also worried about the possibility of a fire starting in the camps. Others are also concerned about a fire getting out of control, but those we talked to were unsure whether the City's plan to create a 20-foot firebreak around the area will help. Theft, gunfire, illegal dumping and trespassing are other concerns.

"The firebreak that the city is proposing will create larger paths for car and truck traffic and will actually make the area easier to access," the woman said. "It will also remove the tree cover that shields the properties of the area, giving unimpeded views onto those properties."

According to a 2017 report by the National Alliance to End Homelessness, an estimated 553,742 homeless people lived in the U.S., with 13,953 in Oregon. David Nieradka, outreach program manager for Central Oregon Veterans Outreach, said at least five veterans live at Juniper Ridge, including a Gulf War vet.

Both Moseley and City Council candidate Sarah McCormick have said they want to see homeless campers moved out of the area, but Porter says a court decision makes that tougher than it might sound.

"The second component is the decisions made by the 9th Circuit [Court] about can we arrest people for trespassing if they're on municipal property or governmental property, if there's nowhere for them to sleep that night," he said. "Can we lawfully do it? And the 9th Circuit has said, 'no you can't.'"

City Council candidate Victor Johnson and Councilor Barb Campbell say they hope to create a village-type area where homeless people can live and have access to services. City Council candidate Gena Goodman-Campbell said the City Council should look into what other cities are doing to address the problem of illegal camping on publicly owned land and learn from these cities to find a good fit for Bend.

Mayor Pro-Tem Sally Russell said she believes the short-term solution to Juniper Ridge is to move current campers farther away from existing neighborhoods and create a physical boundary that eliminates easy access to the neighborhoods in northeast Bend. Then install sanitary facilities and allow social services access on a regular basis.

Solutions in other cities

Dignity Village in Portland, Opportunity Village in Eugene and Hope Village in Medford are three examples of how that could work. The Portland City Council designated a portion of Sunderland Yard, a city-owned recycling center, as a Designated Campground, which, under a State statute allows for transitional housing accommodations. Private donations paid for most of the housing, and residents pay $35 a month to stay.


"We treat runaway dogs and strays with more humility or more humanitarian service than we do people." —Chief Jim Porter tweet this

Eugene City Councilor Claire Syrett said Opportunity Village came about because the city was looking to find alternatives to illegal camping during a time of reduced funding and few options. Syrett said the village hasn't required as much police service as say a large apartment complex might generate.

"Overall it has been a positive influence on the surrounding neighborhood and an important piece of our efforts to help people get off the street and into permanent housing," Syrett said.

Sally Pfeifer, who runs Sagewood Sanctuary—a warming shelter in Bend—said she would like to see a managed homeless camp that has three areas for campers: one small structure for longer-term campers who help manage the camp with staff, another area for tent campers and a third area for people needing 12 hours of uninterrupted sleep.

"Most camps are in the city limits but we are prepared to manage people with vans if the camp has to be further out," Pfeifer said. "This is the model that works in most areas."

Even though many people living near Juniper Ridge want the city to do something about the homeless camps, not all are in favor of just running people off.

"At times I think they should force everyone out of Juniper Ridge, but that's just like squeezing a balloon and the people will end up somewhere else; it's not a solution," Randy, a neighbor who declined to provide his full name, said. "Something I think could be explored is creating permitted spaces in Juniper Ridge for transient camping," he continued. "Create a few areas in there that are almost like RV spots, a cluster of small permitted spaces with a garbage dumpster and port-a-potties so that the homeless folks have a way to deal with their trash and waste, and can have a dignified space to call their own for a while."

Colleen Thomas, the homeless outreach coordinator for Deschutes County Behavioral Health, said there will always be struggles for those who experience homelessness, but each person's experiences are different and need to be looked at in this light.

"A solution for one person may not be right for another. Every person in our community deserves the right to be treated with dignity and respect and deserves a place to call home. That's not to say that if someone is doing something illegal, there shouldn't be consequences," Thomas said.

"I always come back to this—and people are tired of me saying it—we treat runaway dogs and strays with more humility or more humanitarian service than we do people," Chief Porter said. "We pick up a dog, we take him to a vet tech and let them look at him. We make sure they don't have lice on them, we give them a safe place to stay—we give them a bath."