On Wednesday evening, Oregon Gov. Kate Brown announced that all public gatherings including 250 or more people will be banned until April 8. While shopping centers, retail stores and schools are able to conduct business as usual, Brown confirmed that all non-essential gatherings (including school trips, sporting events and parent meetings) must be canceled.
As a result of the widespread local safeguarding, some small businesses in Central Oregon have already taken tough blows, and been forced to make difficult decisions. tweet this

Dr. Dean Sidelinger of the Oregon Health Authority stated that without taking proper precautions and limiting social interactions, novel cases in Oregon could reach 75,000 by May.


During the Wednesday briefing, Brown urged Oregonians to take all possible safety measures in order to prevent community spread.

“Coronavirus is in our community,” she stated. “We should be prepared for thousands of cases in Oregon.” She also noted that the federal government controls available COVID-19 tests. “We are concerned frankly about our testing capacity,” she added—though other health officials did point out that private labs, in collaboration with people's individual health providers, are starting to come online to perform tests as well.

As a result of the widespread local safeguarding, some small businesses in Central Oregon have already taken tough blows, and been forced to make difficult decisions. 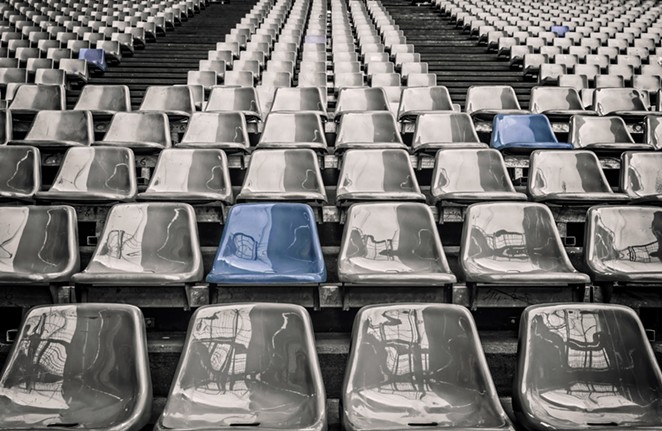 Free Star Yost, the property manager at McMenamins Old St. Francis School, explained how the new ban has impacted the local venue. “We’ve definitely been seeing a slower business flow,” she said. “There have been many catering group cancellations and hotel cancellations.” She noted that because the maximum occupancy for venues throughout the hotel is significantly less than 250, events are generally being conducted as usual, with some slight alterations. “We’re limiting occupancy by half, although all of our event spaces hold way less than 250 people,” Yost explained. “But we’re really taking things day-by-day, constantly re-evaluating to see what’s best for the community, what’s best for our staff and what’s best for our customers.”


The Belfry in Sisters is taking things day-by-day as well. As of now, the “Now You’re Talking... One Acts 2020” will still take place through the weekend as planned, with additional space between guests, hand sanitizer available throughout the venue and no food or drink available for purchase.

In a March 12 press release, the Deschutes Public Library announced that libraries would be limiting programs and increasing digital options.

“In light of recent developments, and the governor’s call to limit public gatherings, Deschutes Public Library will suspend all programming and outreach activities, and cancel public meeting room reservations, beginning Friday, March 13,” the statement read. “The library plans to resume programming and outreach on April 13, but will release the status of public health and safety at that time.” The library will remain open to the public, and extra precautions— like extensive sanitization of common areas and increased hand-washing—will be implemented.

Cassie Clemans, owner of Roundabout Books, explained that she’s doing what she can to support the bottom line while taking all necessary preventative measures into consideration. “The last two weeks have been really slow,” she said. “We expect March to be way down in sales. We canceled our upcoming Young Reader event because we don’t want to actively promote a lot of young people gathering in the same place. We had one of our visiting authors cancel his travel plans, so we’ll be conducting a virtual event; presenting the speaker through Skype. Our other two events are still scheduled, but if the number of cases continues to increase or we get more official warnings, we’ll cancel.” Book clubs will be held as usual.


Clemans noted that running a small, local business in the current social climate will take some creative marketing. “We have a website and we’re encouraging people to shop online,” she explained. “We’re offering free shipping, so people can have books delivered right to their door if they want to support local businesses without leaving the house.” She noted that other small business owners in the area were struggling as well. “It’s stressful for everyone,” she concluded. “Business is definitely down.”

“When it comes to this sort of thing, you’re really compelled more than anything to do the right thing." - Trey Carskadon tweet this


For the first time in 80 years, the Central Oregon Sportsmen's Show has been canceled. “We overcame the worst snow event in 118 years last year,” said Trey Carskadon of O’Loughlin Trade Shows. “There was 3 feet of snow on the ground, and we still got everything together and started on time.” He mentioned that since O’Loughlin was first started 80 years ago, the company has overcome everything from historic flooding and unprecedented snow events to earthquakes. “The coronavirus, however, has proved to be insurmountable,” he said.

“This morning we were all set up and ready to go. This whole thing is evolving so fast; yesterday we were busy doing our due diligence, setting up sanitizing stations and the likes. This morning I woke up to a flood of text messages and alerts, links to the governor’s press conference. We were waiting to be fully informed before making any major decisions, and canceling the show was a difficult and disappointing decision, but we ultimately knew it was the right thing to do.” He explained that the show consisted of over 300 vendors that had (literally) traveled from the far corners of the world to be there. “We have people from Africa, British Columbia, Alaska… people come from all over to be a part of the show. We were anticipating 20,000 attendees this year, because the weather has been so nice and all of the other shows this year have been great. We spend 10 months putting the show together; the vendor spots are sold out by mid-December. There was a lot at stake, there was a lot of expense going in.”

Carskadon said that at the meeting this morning, everyone agreed that people had to come before profit. “When it comes to this sort of thing, you’re really compelled more than anything to do the right thing,” he said. “We told all of the vendors at 10am this morning that we were canceling the event in the interest of public safety. But we’ll lick our wounds and come back next year, better than ever.”

And see updated stories, including event cancellations, at our COVID-19 HQ page.