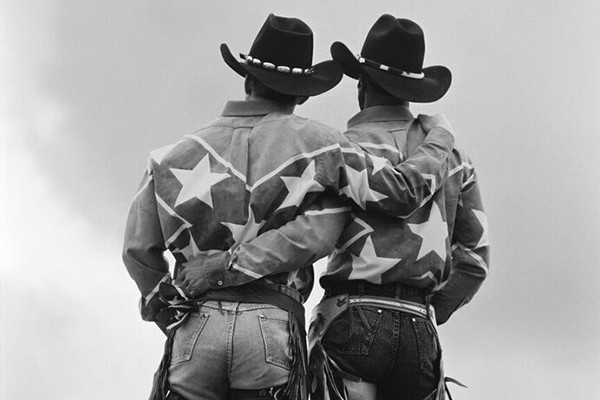 In 1988, photographer Blake Little attended his first gay rodeo. His interest was piqued immediately, and he started participating, both as a contestant and as a photographer. He spent the next four years taking black and white photos. Starting December 15, photos from his time with the gay rodeo will be on display at the High Desert Museum.

The traveling exhibit, "Blake Little: Photos from the Gay Rodeo" features 41 black and white photos Little took between 1988 and 1992. The exhibit is curated by Johanna Blume, assistant curator of Western art at the Eiteljorg Museum of American Indians and Western Art in Indianapolis, from which the exhibit is on loan.

"This exhibit highlights a space where people can belong, and where they can figure out who they are as an individual and in their community. We wanted to show how significant these types of spaces are—where LGBTQ people in rural spaces could find and forge meaningful connections." — LAURA FERGUSON tweet this

The exhibit includes a variety of photos, including everything from portraits that look like the stereotypical cowboy, to action shots of riders desperately clinging to the back of a leaping bull. Because Little was also a participant, his photos allow viewers to get a behind-the-scenes look at the rodeos as they walk through the exhibit, said Laura Ferguson, curator of Western History at the High Desert Museum.

Some of the cowboys in the photos are still riding; others have retired and some have passed away. One cowboy, Jerry Hubbard, featured in several photos, was one of the best cowboys in almost every event in which he competed in, Little said. Hubbard passed away in the mid '90s.

"We are always looking to tell a wide range of stories, and this exhibit seemed interesting and exciting," Ferguson said. "It pushes people to examine their stereotypes and it challenges them to think more broadly."

While gay cowboys are not a new thing, it was something that many cowboys, especially those in rural communities, felt they needed to keep hush-hush. Some might have kept it secret from everyone in their community.

There were some gay rodeos as early as 1976, and in 1985 the International Gay Rodeo Association was formed.

"This exhibit highlights a space where people can belong, and where they can figure out who they are as an individual and in their community," Ferguson said. "We wanted to show how significant these types of spaces are—where LGBTQ people in rural spaces could find and forge meaningful connections."

Ferguson hopes this exhibit will show Central Oregon residents something they might not typically think about.

"This exhibit will push us to think more broadly about what it means to call the west home," she said. "It's why we were so excited to bring the exhibit to the museum."

States the press release from the High Desert Museum: "Little's photographs don't just depict his individual past experiences with the rodeo, they celebrate the lives of rodeo participants and illustrate the collective memory of a vibrant community whose story is part of the Western experience."