Cannabis, North of the Border | The Source Weekly - Bend, Oregon

Cannabis, North of the Border

Last month, I found myself in Vancouver, British Columbia, Canada, for 46 hours to help my Canadian friends The Sadies and Kacy and Clayton kick off a tour. Although I've visited B.C. frequently, I hadn't been back since the country passed national cannabis legalization in 2018.

My Canadian cannabis experiences began in 2003 when I was a judge for the second annual Tokers Bowl, a multi-strain/grower/day event, produced by the late "Cannabis Culture" magazine. 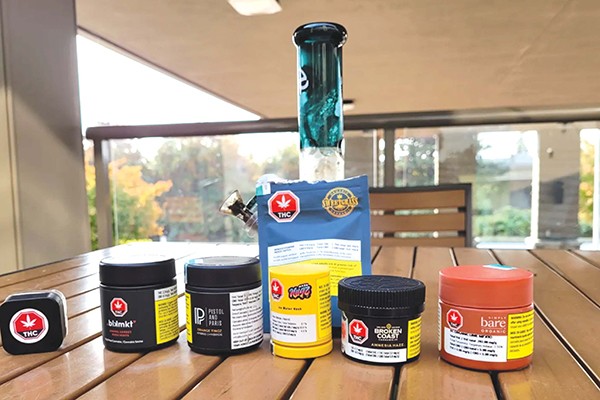 I was posted up with the bands at a hotel in Richmond, a suburb of Vancouver near the airport, a city that does not allow cannabis storefronts. Thankfully, a 15-minute SkyTrain ride dropped me off into the heart of downtown Vancouver, where cannabis stores abound—so much so that deciding upon where to buy was a welcome challenge. Online reviews suggested two shops within walking distance that had the trifecta of quality selection, good prices and knowledgeable budtenders. I selected Muse Cannabis and City Cannabis Co.

The layout of both stores was similar, and markedly different from Oregon dispensaries. Everything was located in well-lit, locked glass display cases, and the flower was prepackaged, albeit with more care than Oregon products. This meant smelling the flower wasn't an option, making me even more dependent upon the producer's provided description and budtender recommendations.

I told the three budtenders I wanted eighths of any strains that were highest in terpenes, regardless of THC content, was preferably a "Canadian" strain (ala Maui Wowie) and was produced by craft growers. I also asked for solvent-free concentrates.

The staff seemed enthused to help, although it could have just been Canadian politeness.

The exchange rate gave me a 25% discount. There were ounces for under $100 from other growers, as well as cheaper options for concentrates.

I was ready to begin sampling and asked one of the budtenders if there was a place nearby where I could smoke. He said, "Anyplace where cigarette smoking is allowed, but so long as it's outside, I don't think anyone cares where, really."

I mentioned having visited smoking lounges years ago, and he perked up "Oh, you mean the Amsterdam Cafe, right below the Cannabis Culture Cafe? It's about a dozen blocks from here."

Which is how I found myself back at the same building that I had visited as a Tokers Bowl judge, when it was the offices for "Cannabis Culture" magazine. Now the third floor was an expansive smoking lounge with scattered couches, chairs and tables, a reggae soundtrack and a $5 cover charge. They offered me use of a sterilized analog Volcano, grinder and tray, as well as a selection of non-alcoholic drinks, snacks and assorted pre rolls for purchase.

I happily sat and vaped all five strains in three sizable volcano bags each, taking increasingly blurry photos of the containers perched in the large windows overlooking a park across the street. Each jar had an airtight foil seal over the lid, and most had a humidity pouch. It was by far the finest prepackaged flower I had ever tried: flavorful, sticky and potent.

That night back at the hotel, I was thrilled to discover that the outdoor deck with tables and chairs allowed cannabis consumption. With the bong purchased that day, we sampled tasty and effective flowers and hash that The Sadies had been gifted by friends and neighbors, as well as my purchased rosin and hash late into the evening.