Cannabis: The State of the Industry

While other industries lag, cannabis jobs grew by 32% last year

With unemployment numbers still high and so many businesses continuing to struggle due to the effects of the COVID-19 pandemic, one of the bright spots in the economy over the past year has been in cannabis. This week, cannabis marketplace Leafly released its fifth-annual jobs report, which shows just how much the industry has grown over the past year.

With more states approving recreational and/or medical marijuana during the last election, jobs in cannabis grew 32% in the last year—growing a whopping 161% since 2017, making the industry the fastest-growing job creator in the nation, according to Leafly. 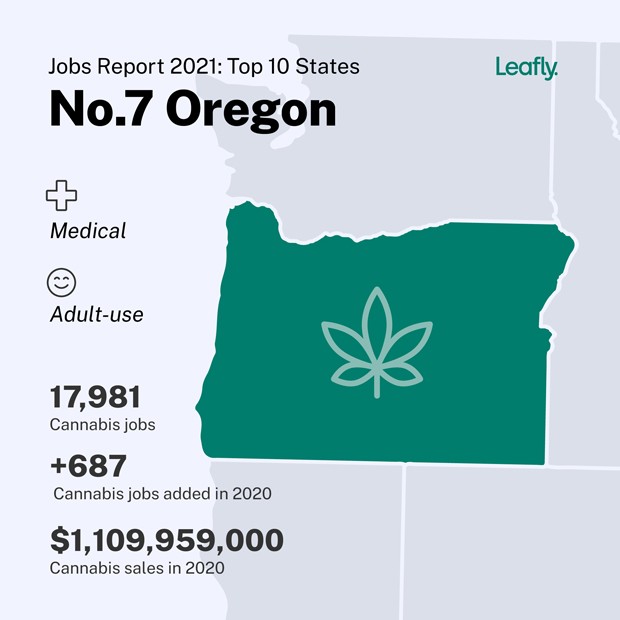 Oregon—among one of the first states to legalize recreational cannabis in 2015—saw job growth and increased sales over the past year, in keeping with national trends. Nearly 18,000 people in the state are employed in cannabis jobs, with Oregon adding 687 jobs in cannabis in 2020, Leafly reported. According to its statistics, Oregon had the seventh-most jobs in cannabis in the nation—behind number-one California, number-two Colorado, and number-three Florida—which has a medical marijuana program but no recreational program. Arizona, which had a medical program for years, but only opened its recreational stores as of January 2021, was number four, followed by Washington. The state with the sixth-most cannabis jobs was Michigan—which only legalized recreational pot in 2018.

For the first time, Oregon saw sales of cannabis topping $1 billion in the state in 2020. In recent years, Oregon became well-known for its oversupply of the green stuff—but with $1.1 billion in sales in 2020, demand has since caught up with supply. That rise in sales is in keeping with national trends; as the pandemic lockdowns ramped up in March 2020, so too did cannabis sales across the board in legal states.

"Customers responded by stocking up for months of stay-at-home advisories and social distancing," Leafly's report reads. "After a brief dip in late-March revenue, most stores saw a significant bump in April—and then the bump became a plateau." What's more, cannabis buyers increased their spend by about 33%.

"With the arrival of COVID-19 vaccines and the gradual vaccination of the general population, the end of quarantine pods, the re-opening of live social entertainment venues, and a lessening of anxiety levels, we may see a shift back to pre-pandemic buying patterns by the end of 2021—or the emergence of some new normal," Leafly wrote.

Due to continued ongoing federal prohibition of marijuana, the U.S. Department of Labor doesn't count state-legal marijuana jobs, Leafly reported. As a result, the cannabis marketplace worked with labor economics experts to compile publicly available sales and cannabis license data from the various state agencies, along with other available data to compile the jobs report.