Care for a Line Dance with Your Chicken? | The Source Weekly - Bend, Oregon

Care for a Line Dance with Your Chicken?

Back in the before-times, most would have thought nothing of sidling up to a crowded bar or squeezing in next to a total stranger for a Saturday-night dance party. These days, those are #goals to return to for almost any bar owner—not the least of whom are the owners of Cross-Eyed Cricket Watering Hole, who recently remodeled and revamped the former Maverick's Country Bar and Grill into a refreshed gathering spot, complete with a new dance floor. Line dancers and Western-swing enthusiasts, this will one day soon be your place to return to your before-times glory.

Long known as the spot to go in Bend for country dancing or even a foray on a mechanical bull, Maverick's owner Mike Hayes teamed up with Garrett Wales and Mike Moor—the pair behind Life and Time and Vida Y Tacos on Bend's west side, and formerly of 10 Barrel Brewing—to re-envision what a country bar looks like. 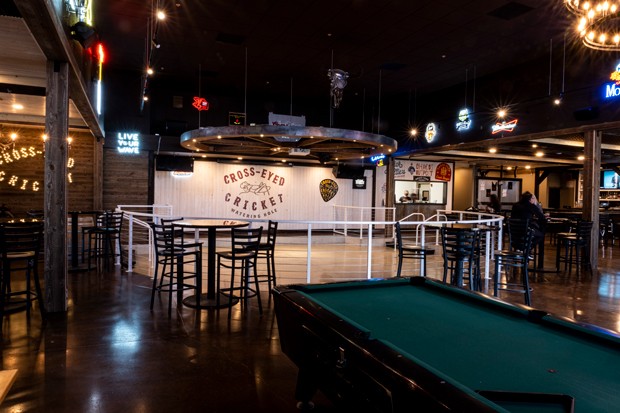 The trio painted the exterior and brightened up and remodeled the interior, turning the former bar area into a new, more inviting dance floor seen right upon entering the space. Outside is a patio and a bar window that opens and closes depending on the weather—similar to one at the original 10 Barrel on Bend's west side.

Cross-Eyed Cricket opened for business Feb. 16—though as of yet, scheduling events like line-dancing night isn't allowed under pandemic restrictions. The space offers three food concepts, ordered at a pickup window: The Slick Willie's Fried Chicken menu offers brined and air-dried fried chicken in buckets, or served in sandwiches, such as the Spicy Fried Chicken Sandwich served with jalapeno slaw. When I stopped in for lunch, the crispy yet juicy chicken tenders on the Spicy Chicken Sandwich didn't disappoint—and fortunately for everyone involved, came with a healthy dose of napkins. 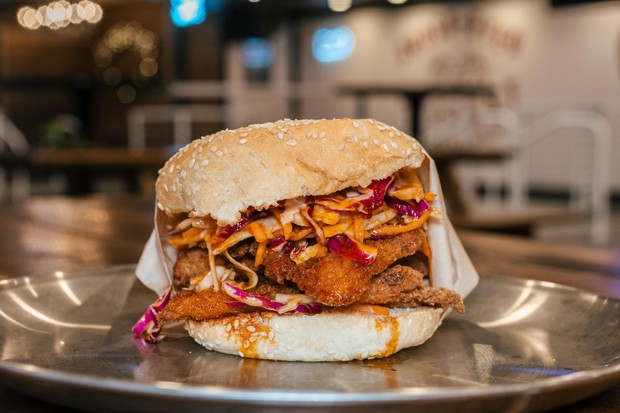 Cross-Eyed Crack Burger is another menu concept, made up of, you guessed it, burgers, fries and onion rings (I also tried those, and they were perfectly cooked with just the right amount of crispy bite). The staff also recommended the "Out N In" burger, a double-patty, double-cheese burger served with a special "super sauce." Also coming soon is a third menu concept, Chaco's Outpost, which will offer tacos and other favorites.

And just in case you're out on a Saturday night and really want to impress your date, Cross-Eyed Cricket is also serving up desserts by way of its Loddy Doddy Ice Cream Party menu, offering massive ice cream shakes and more. The Birthday Cake Shake comes with cake ice cream, topped with actual birthday cake, and, for the adults, a topping of whipped ice cream vodka. Wales and Moor also plan to open a full-fledged ice cream shop, also called Loddy Doddy, on the west side of Bend by summer 2021.

Those who remember Maverick's also likely remember one of its most distinguishing features: the mechanical bull lauded by generations of wannabe Central Oregon rodeo stars. Will it be back?

"The mechanical bull has been in hiding for a long time, and it will be back in event capacity," Wales told the Source. "The problem with that thing is, it's like a full-scale professional one; it's got to be bolted to the floor and has a huge footprint. We've got it out of storage, we're building a huge trailer to put it on, so we can bring it in for special events or rodeo weekend, or concerts. We want to do a lot of concerts."

Wales said the goal—guidelines permitting—is to do a series of concerts in summertime, ideally utilizing the bar's parking lot to allow for more room to bring in bigger acts. The team is also planning a smaller stage for indoors.

"It's unabashedly a country bar, but if country is not your thing, you're still going to have a blast here. Good food, it's going to be a lot of fun, really high energy—it's how we like to do everything."

For Wales, a country fan himself, part of the inspiration for the Cross-Eyed Cricket came from his own desire to see places where small or mid-size country acts can gain a following.

"There's the fairgrounds or maybe there's a country show every now and again, but no one is playing Mike and the Moonpies or those other underground, independent artists—they really don't have an outlet here," he said.

Even the name of the bar has country-music roots; Wales said it was gleaned from the Eric Church song, "Pledge Allegiance to the Hag," whose lyrics go:

"There's a little dive on a dead-end road

Where you can hear the sound of a steel guitar