Catching Up with Mr. Humble

Big wave surfer Gerry Lopez lives the legends, and shares the stories in a new film

To call big wave surfer Gerry Lopez a legend at this point would be an understatement. Yet, he still finds this status shocking. Lopez talks about his accomplishments with a humbleness that only a true master of their craft could possess and has an air of calm surrounding him that is infectious. He pioneered some of the most famous surf spots today, earned the status of Mr. Pipeline at one of Hawaii's most notorious breaks and always welcomed new innovations in the surf world that others may have sneered at, all in the name of fun and curiosity.

While surf was a big part of his life, snow crept in, too.

Lopez has lived in Bend for 30 years after falling in love with snowboarding and the Bend community, and still loves it here today. The Source Weekly was lucky enough to catch him over Zoom in between tour dates, where he's premiering the new film, "The Yin and Yang of Gerry Lopez: The Path to Enlightenment Begins at the World's Deadliest Wave," produced with surf and skate legend Stacy Peralta.

The film is premiering in select theaters and festivals across the country, and will complement the third printing of Lopez's book "Surf is Where You Find It." Tour dates are still being announced, with a Bend screening in the works to be posted at a later date.

The conversation has been lightly edited for clarity.

Source Weekly: For our readers who haven't heard about the film yet, what is it about?

Gerry Lopez: Me. (laughs). I mean, I read all these reviews on the thing and I'm going, "Who are they talking about?"

The movie goes through a lot of these different phases of my life. To put it metaphorically, for me, it's kind of just an extension of the surfing experience. You find yourself in different situations in surfing and one of them is called getting caught inside when you're out of position—when a big set comes and not only are you not able to catch the waves, but the tables get turned and the waves are going to catch you and you get pounded. So you have choices. You can kind of just give up and get washed back to the beach or you can panic, which is even worse, or you just know what's about to happen. You put your head down and you keep paddling and in a way that's kind of what one of the messages of the film is. Whether it has to do with surfing or life, it's kind of the same thing that you have these choices and they're up to you. What choice are you going to make? 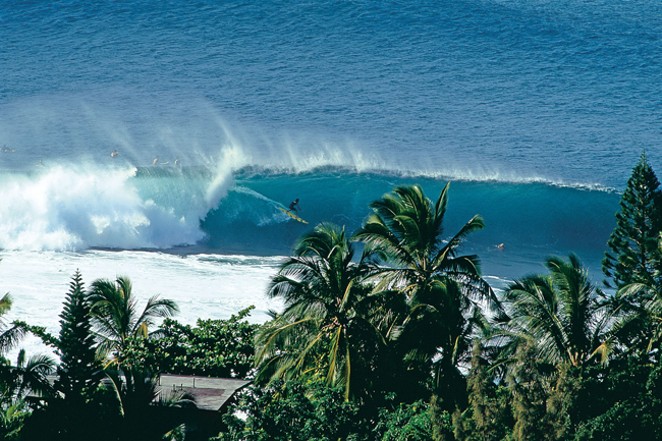 SW: How did the film come together working with Stacy Peralta?

GL: Stacy Peralta is a friend of mine and we've worked on a couple of things in the past together. Not only does he have a huge reputation as one of the early skateboarders, but as a filmmaker he's been tremendously successful. I knew when he was one of the Z Boys, and as a kid he was already making videos.

I was with some friends and they go, "Hey, we got to watch this movie, it's called 'Dogtown and Z-Boys.'" And I watched it and I couldn't believe, you know, how great it was. I knew most of those guys and they were kind of rough, to put it mildly. The way he put that film together, he made those guys look like giants. I mean, it was really, really complementary of not only that era, but those people... Even though some of them are a little haggard, when he was interviewing them, he really got great interviews out of them.

Later on, he was doing a movie for Quicksilver called "Riding Giants," about big wave surfing and he came up and we did a pretty big interview for that. And at that time, he mentioned something about maybe doing a movie together about my life. One thing led to another and Patagonia started a film division, and a friend there called me up saying, "We want to do [the film]." It all came together and it took a while, but long story short, the film's done and we premiered at the Santa Barbara film festival back in March.

“My whole life has always been about doing stuff that I find really interesting.” tweet this

SW: How do you think the film perceives you versus how you perceive yourself?

GL: Kind of shocking, actually. I guess I perceive myself a lot smaller or less than the way it comes off in the film. I don't believe that I've got anything special going different than anyone else. I think I just happened to be in the right spot at the right time. Guys took pictures of me, I had a lot of opportunities to do other stuff that maybe a lot of people dream about, and maybe don't get those opportunities. My whole life has always been about doing stuff that I find really interesting.

SW: How do you see the book and film complementing each other?

GL: Well, I'm old school. Before television, newspapers and reading were how you learned and gathered information. Books were a huge part of my life from as soon as I could read and have always been and still are. So, I would much rather read a newspaper than watch the news on TV. A book always gives the person a little bit more depth because they can pause during the reading process and think about what was just read and not be interrupted.

The book came way before the film. The newest [book] is the latest one with new pictures. We actually didn't add any more stories but it came out really nice. The film is fast. So, pretty much all the stories, all those adventures in the book are parts of the movie. 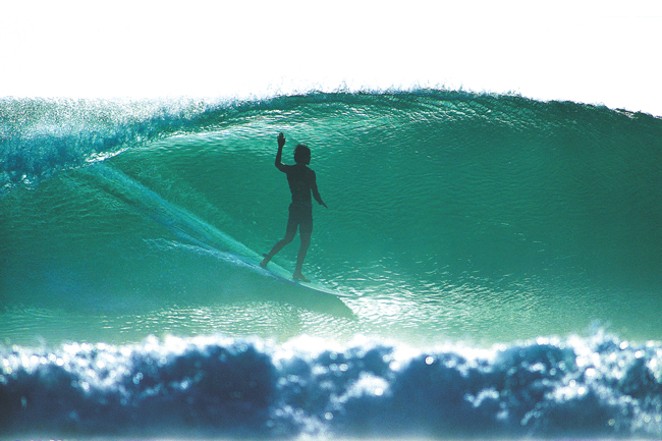 SW: What do the film and book mean to you personally?

SW: Have you had a conversation with the non-surfing crowd and how they've been enjoying [the film]?

GL: I'm just back from the MountainFilm festival in Telluride, Colorado... The response [from non-surfers] was kind of overwhelming to see what they got out of the film. They maybe knew a little about me or a little about surfing, but that wasn't what the takeaway was. It was that a lot beyond surfing that they can really relate to, like family and dealing with any kind of issues or adversity.

SW: Who are you and Stacy trying to reach out to with the film?

GL: Well, I mean, there's our world, which is the surf world, but at the same time, we felt that there might be a greater message that goes beyond the surf world. I think our hope was that we could somehow get that message across to the people that weren't surfers and maybe aren't even interested in surfing.

SW: Were you trying to reach a similar audience with the book?

GL: When I first thought about writing a book, I read all the books that all the other surfers have written and that wasn't the kind of book I wanted to write. I guess the whole reason the book came about was that I tell stories about things that happen and people often would say, "You should write that down." And a lot of the stories in the book were actually stories that I wrote for different publications and kind of just put them all together.

But mostly, they were about people that have really impressed or influenced me throughout my life as well as adventures that were fun to share with friends. The idea of writing these kinds of short stories was that, I like to laugh when I think about it, when I tell people, "This is a bathroom book" (laughs) and they go, "What do you mean by that?"

Whether it has to do with surfing or life, it's kind of the same thing that you have these choices and they're up to you. What choice are you going to make?”—Gerry Lopez tweet this

I go, "Well, you leave it in your bathroom and every morning when you go in to do your business there's a nice short story. You can read that. Get you through the process and in some cases maybe scare the crap out of you" (laughs).

It's the kind of book that people can read a little and put it down and come back to at a different time and still find it interesting. I just want it to be a book that you could pick up no matter where you are, what your mood is, open it up to any page and just start reading and go, "OK, that sounds fun."

SW: How have sources of inspiration evolved for you over the years?

GL: I just take it as it comes and every day. There's something that just kind of makes me raise my eyebrows and go, "Whoa! That got my attention." I think that's all you can hope for is to be inspired to think and feel, and hopefully the film can do that for people.

SW: Is there an environmental advocacy part of the film? I know that's a big emphasis for Patagonia films.