Tár is a symphony in self immolation

I was talking to a friend before the screening of the new Cate Blanchett movie, "Tár," last weekend, discussing the movies that intimidate us—movies that are crafted by genuine auteurs whose vision is so distinct and personal, it can almost be a losing battle to try to craft a review of them. There are certain movies I know I'm not smart enough to discuss on certain levels, but dammit, I find myself trying anyway. 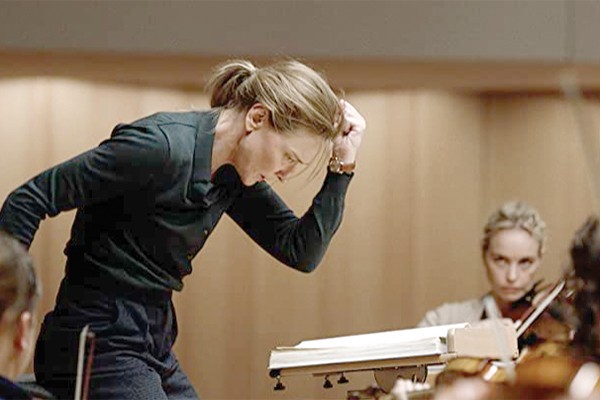 "Tár" intimidates the hell out of me. You already know that Cate Blanchett is a master performer and I'm sure you've heard that her work as fictional Berlin Orchestra conductor Lydia Tár is her career-best work. That's not overstating anything. Blanchett doesn't disappear into the role, instead she lives inside it completely (to the point where if she were to suddenly quit her career as an actor and become a composer it would make perfect sense.) She is actually conducting Mahler and Elgar's symphonies. It's astounding.

But her performance is only one of the major keys of the film. Written, produced and directed by Todd Field (his first film since 2006's "Little Children" and only his third including 2001's "In the Bedroom"), "Tár" isn't just a showcase for Blanchett's genius. Field's script and direction are never overshadowed by the performance; instead, they combine to make something so intimate and intensely human that you leave the theater feeling like Lydia is someone you know but haven't seen in a very long time.

"Tár" also takes a long look at cancel culture, at gender roles in male-dominated fields, at power disparities surrounding sexual relationships, at self-destruction and so much more, but there are no monologues, no overly dramatic set-pieces or obvious bits of exposition. Instead, we spend almost two-thirds of the 158-minute runtime just watching Lydia exist in her day-to-day life. We watch her run errands and rehearse her upcoming performance. We are pulled into her routines so that we understand Tár not just as a fictional character, but as a human being we can empathize with even in her coldest moments.

Viewers might find the slow-burn first two acts of the film to be a bit repetitive and laborious. There aren't many moments of high drama to sift through because Field's screenplay always opts for realism in between Tár's bad dreams. When her life starts falling apart, it comes fast but with plenty of warning, so that her downfall is heavily tinged with a melancholy air of inevitability. She isn't a very likable person. In fact, she's sexually predatory and uses her power to quite literally destroy lives, but because of the time Todd Field gives us with her and the brittle humanity Blanchett instills in her, even as we watch her fall apart, we don't rejoice.

Ultimately, "Tár" isn't just about a rich white woman losing her shit, but an anthropological study on modern humanity and a morally discomforting examination on gender and class. The film asks for a lot of patience from its audience, which it then rewards with one of the most jaw-dropping final shots I've ever seen.

There's a complexity to "Tár" that most films past the 1970s don't really have time for anymore. I haven't stopped thinking about the movie since it ended because it felt like such a gut-punch of truth I'm not sure I was really expecting. I might not be smart enough to have caught all the subtleties of theme and execution, but I know "Tár" is a work of art that people will be discussing for years to come. Hopefully, I'll be less intimidated by then.