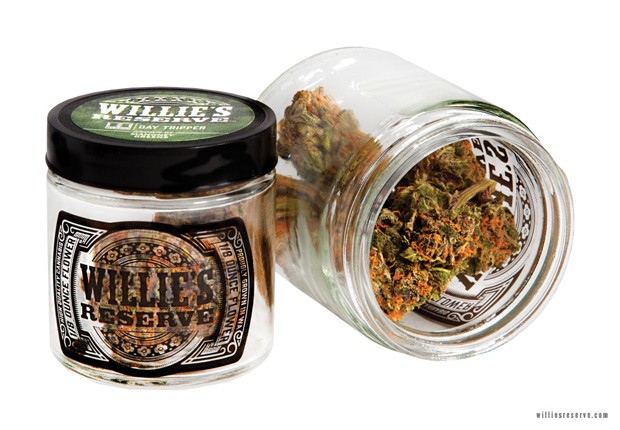 Lately, some of the people I've seen play pretend on my "story box," or people whose music I listen to, or people who I watch do things with a sportsball that earn them millions of dollars, are becoming involved in cannabis. They're pushing cannabis in many forms—and the term "celebrities" should by no means diminish the activist work performed by any of these folks on behalf of medical use, legalization, etc.

Celebrities such as Willie Nelson and Snoop Dogg, who between them have potentially consumed hundreds of pounds of cannabis over decades? No one has ever said, "I was not aware that Mr. Nelson/Dogg enjoyed partaking of the pot weed. This is new information to me." Both have made cannabis part of their brands over the years.

Perhaps the foremost name associated with cannabis is Bob Marley. Marley's widow Rita and his 11 children formed Marley Naturals, backed by investment group Privateer Holdings, which has raised $200 million for the brand. (Privateer CEO Brendan Kennedy told Merry Jane, "Bob Marley is more closely tied to the product than anyone we could think of... In some places people even say, 'Let's go smoke a Bob Marley.'" No, "they" do not, Brendan. No one you want to get high with says that.)

"Closely tied to the product" is telling. It's not weed, marijuana or cannabis—it's the "product." There are celebrities who are getting involved into cannabis strictly because this is a "product" that will provide a high ROI.

This includes the man about whom Metalblast.net published the fascinating think piece, "Top Five Reasons Why Gene Simmons Is A Piece of Shit." The frontman of KISS has invested $10 million into Invicutus, a Canadian cannabis producer. Yet he admits he has never smoked pot, and told CNN Money, "I've got $10 million wrapped up in the stock because I believe in it. For me, it's a business move." Is someone who's never smoked cannabis someone I need to hear from? Nope.

This isn't to say that celebrities shouldn't profit from the recreational cannabis industry, which many believe is poised for national legalization. Tommy Chong is as synonymous as anyone with cannabis and has been more than just a stoner archetype. In 2003, Chong was sentenced to nine months in federal prison, fined $20,000 and forfeited over $100,000. His sole "crime" was selling 7,500 bongs and pipes from his website, Nice Dreams.

Chong did time for selling bongs and credits cannabis for curing his cancer. His screen work is arguably the precursor to all stoner comedies of the past 50 years. His brand, Chong's Choice, supports a true OG for the cause, whom I would rather support than someone like Simmons.

Athletes who used cannabis during and post-career have also come on board. Al Harrington played 16 seasons in the NBA and become a cannabis convert after a botched knee surgery. He started Viola, a vape cartridge and extract company carried in several states. Mike Tyson has recently broken ground on a 40-acre "cannabis resort" in the California desert, including 20 acres of cultivation, an edibles factory and an amphitheater. (In 2000, Tyson had a winning TKO decision changed to "no contest" after testing positive for cannabis.)

A lack of capital and loans via traditional banking systems limits options for cannabis businesses. Partnering with a celebrity, and their often deep-pocketed partners, can be a much-needed lifeline to a cannabis brand. But providing easier access to capital would allow craft cannabis businesses to stay independent while expanding their operations.

The people who produce the best cannabis often aren't public figures. Let's hope there will soon come a time when they are recognized alongside other agriculture-based superstars—such as chefs, brewers and vintners—and as celebrities in their own right. Part of normalization of cannabis means acknowledging that the people growing and processing the cannabis you enjoy are just as worthy of attention as a former sitcom star, musician or athlete...and perhaps more so.