May 29, 2020
26 comments
Last fall, a group of parents and kids from Elk Meadow Elementary School stormed Bend City Hall for weeks, demanding the City stop Verizon Wireless from building a cell tower next to the school. Verizon built the tower anyway, and Bend City Council said cell tower infrastructure is under federal jurisdiction, so there’s not much it can do.

Now, a new group of Bend activists want to ban 5G cell towers altogether. They’ve written nearly 100 letters to the City Council, and this week, they plan to blanket the town with posters and fliers touting the what they say are the dangers of this new technology.

For Katrina Rose, 39, the anti-5G movement is her first foray into political activism. For years she helped manage Sol Alchemy, a yoga studio and gathering spot for people within the interlacing circles of Bend’s yoga community.

“I’m electro-sensitive, I’ve never held a cell phone to my ear,” she said. “I can’t go into some local businesses because of their proximity to cell phone towers. If I’m near a tower for a long time, I feel sick.”

Rose has wrapped her house in southeast Bend in magnetic hematite, which grounds the radiation and Wi-Fi frequencies coming from her neighbor’s house.

“In the past, people haven’t been super receptive [to learning about the potential danger of 5G], perhaps because they’re not hyper sensitive to it, but we’re in a new era [with the coronavirus] where people are super concerned about their health and safety,” Rose said as she handed out fliers and posters during an anti-5G promotional event  in late May.

5G infrastructure has also gained attention lately in connection with a conspiracy theory that it causes the coronavirus. In the United Kingdom, dozens of mobile towers were burned in protest, according to The New York Times.


5G is the next generation of mobile wireless communication and it will enable the connectivity required for self-driving cars and light-speed internet transmission. Unlike present-day cell towers, which are usually large and obvious, 5G infrastructure will require companies such as Verizon Wireless, AT&T and T-Mobile to install hundreds, if not thousands, of small antennas low to the ground throughout residential neighborhoods and business districts in Bend.

5G emits smaller waves than 4G, and many more of them. These waves don’t travel as far, and thus require at least one mini tower per city block, or one tower for every two to eight houses, Rose said.

Wi-Fi, microwave ovens, cell phones and cell towers all emit electromagnetic fields, or EMFs. More than 2,000 scientific papers—published by biophysicists and physicians from Harvard Medical School to Johns Hopkins—document findings that EMFs are harmful and can cause cancer, immune suppression, infertility and a range of cognitive disorders.


Getting the message out


Rose is used to taking a leadership role: I met her at the Essential Light Institute, a nondescript room across from Safeway on SW Century Drive in Bend where she prepares to lead a group of musicians and singers through a weekly Kirtan (devotional chanting) group. Her hair is about a centimeter long with a braided pony tail dangling off to the side and a quick, bright smile.

Before the song group, she hands out posters and talks directly to people in the community who are interested in banning 5G from Bend. She’s as quick to rattle off scientific citations about the health dangers of 5G as she is to describe the semi-conspiratorial repercussions of a 5G-enabled surveillance state and the “corporate, anti-human agenda” of telecommunications monoliths like Verizon Wireless and AT&T.

Rose knows the political tides are not flowing in her favor and has crafted a list of many of the arguments these companies will use to plow over small anti-5G insurgencies popping up throughout the U.S.

For one, Americans want fast internet—a desire that’s become even more pronounced in the age of coronavirus. According to Verizon Wireless, 5G will ostensibly create millions of jobs over the next 15 years. T-Mobile promotes the idea that this next-level interconnectivity will allow for smart buildings and energy savings down the line. 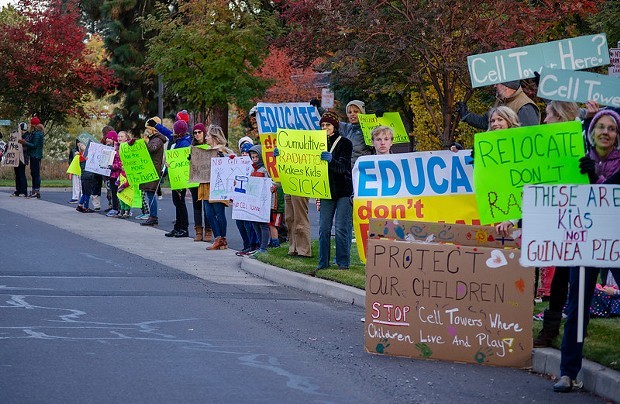 But the anti-5G movement is gaining momentum throughout the world. City governments from New Hampshire to Hawaii have halted permits for 5G infrastructure until it is proven safe. Meanwhile, the Bend City Council and City Attorney Mary Winters have said the City is powerless to prevent these companies from building cell towers, because it’s the Federal Communications Commission’s jurisdiction. In response to the “Stop Cell Towers at Schools” group in the fall, the City Council did pass a resolution on December 4, 2019. It sent a letter that asked the FCC to research the health risks of 5G towers and to update its investigations on cell phone safety concerns, which the FCC last reported in 2001.

Mayor Sally Russell responded to the Source's request for comment on May 29:

"Because the issue of whether to allow 5G facilities is an FCC (Federal) issue, as Mayor I have chosen not to focus any further on this issue, nor has a majority on the Bend City Council chosen to make this a priority or a goal," she wrote.

"All of us at the City of Bend consider our residents’ health as a highest priority, Russell said. "This is why we have taken a good deal of time to research this issue to make sure our decision is a responsible one for our community members."

But Rose wants the City to go further. She said it could pass a resolution that calls on the Oregon State Legislature to establish a commission to investigate the environmental and health risks of 5G.

“They have taken an oath to protect their citizens, the human beings they represent, and to take a stand against corruption,” Rose said.

“It’s about a certain kind of purity of our biofield… the quality of our thoughts, emotions, the food we put into us, the quality of the energy we radiate and take in, all of that effects consciousness,” she said. “We should have the right to choose to align with health if we want to. [The proliferation of] 5G takes that away from us.”