Central Oregon Now and Then | Outside Features | Bend | The Source Weekly - Bend, Oregon

Central Oregon Now and Then

Where Bend streets got their names 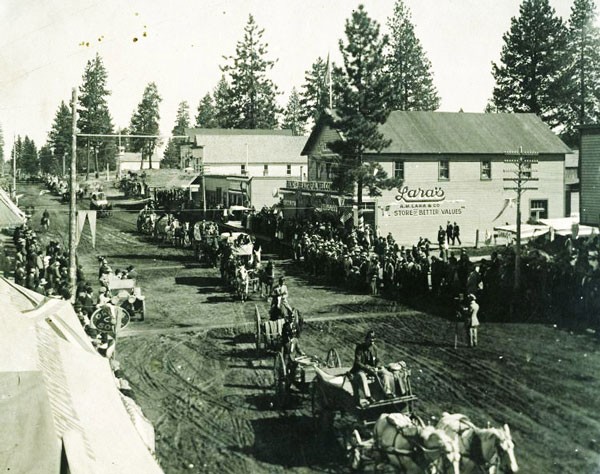 Entering Bend's downtown, I've often wondered about the origins of the street names there and in the mill worker's neighborhoods. Wall, Hill, Harriman, Steidl, Tweet and many more are attributed to significant people who developed the town.

Over the years, Bend has transformed from a tent and shanty village, occupied by a handful of families, into a burgeoning mecca for industry, commerce and recreation. The prize in central Oregon was the Ponderosa pine because of its commercial value. At the beginning, no real streets existed—just cow paths and a road from Prineville providing supplies from major metropolitan areas.

In Bend's infancy, freight and settlers made the trip from the Columbia River by a rail line that traveled from Biggs Junction to Shaniko. Goods and passengers transferred to wagons and stages, with teams as large as eight horses journeying through Cow Canyon to Prineville, out to the sparse settlements on the high lava plains and the northern Great Basin.

A clapboard-sided post office and a tent sat at the southwest corner of Greenwood and Wall Streets in 1902. People suggested many names for the new post office, including two Native names: Quelah, meaning the beautiful valley, and Wychick, referring to a river crossing, later Farewell Bend. Farewell Bend had to be abandoned because of a same-named post office in Idaho, and it was ultimately shortened to Bend.

Many of Bend's early residents arrived from the upper midwest, especially Minnesota. Alexander Drake, along with many of Bend's original families, arrived on the stage or came along with the freight. Drake came to Bend in 1903 and established his residence on a 3 ½ acre parcel along the east bank of the Deschutes River.

To Drake's dismay, cattle roamed freely throughout the region, so he employed local stone masons to build a wall extending south from today's Greenwood Avenue, south to Franklin to keep the wandering grazers off his property. Drake, under the auspices of the Pilot Butte Development Company, filed the plat for Bend in 1904. New arrivals Nicholas Smith, John Steidl and Tom Tweet went to work for Drake laying out the streets. Not wanting to evoke the ire of Drake's wife, her love of cow paths was incorporated into some of the streets that meander through downtown. Nicholas Smith was hired in 1904 to remove junipers, grade the freight road adjacent the wall and build a 6-foot-wide boardwalk. Hence, the origin of Wall Street's moniker—though no portion of the wall remains today.

Bend became the region's commercial and cultural heart during the first decade of the 20th Century, leading to the establishment of boutique shops and first-class hotels. Early in the town's development, tourism was touted because of recreational opportunities including fishing, canoeing, camping, mountain climbing and exploration of the lava tubes of the Newberry Volcano.

The first "auto stage" with solid rubber tires arrived in town in 1905, boasting a max speed of 55 miles per hour. Gas sold for 40 cents a gallon, only available in 5-gallon cans. The town was electrified in 1910, following the completion of the dam and powerhouse that created Mirror Pond. The installed street lights were even brighter than those in Portland. Early buildings were constructed primarily of lumber. Foresight by civic leaders led to an ordinance dictating fireproof construction for all buildings within the business district in 1913. Central Oregon's masons were masters in the use of local stone for building supports and foundations, utilizing basalt and tuff, a consolidated, hardened volcanic ash.

Growth was slow until the Hill and Harriman railroad wars in the Deschutes River canyon, with completion in 1911. After the death of E.H. Harriman, the bitter personal rivalry between Hill and Harriman ended, and James Hill drove the golden spike in Bend on Oct. 5, 1911. The end of the rivalry possibly contributed to the fact that the Oregon Trunk line didn't extend farther south. The plans for the extension were to utilize the rail lines employed by the Shevlin-Hixon Timber Company. The Western Pacific railroad completed the extension from Bend to California in 1928. The names of 4th and 5th streets that paralleled the railroad were changed to Hill and Harriman sometime between 1912 and 1916.

The timber industry contributed to primary growth, along with agriculture until the late 1970s. Recreation boomed with the development of Mt. Bachelor. The Dalles-California Highway (Highway 97) incorporated Wall Street as part of the state highway system. With the development of 3rd Street and the local business district, Hwy 97 was rerouted from downtown.