We're well into Pride Month, and the main event is kicking off on June 22 at Drake Park in downtown Bend.

In addition to an impressive lineup of entertainment and speakers, this year's event will also join Pride celebrations across the nation in marking the 50th anniversary of the Stonewall riots—the 1969 protests that are credited as the birth of the modern LGBTQ+ movement. 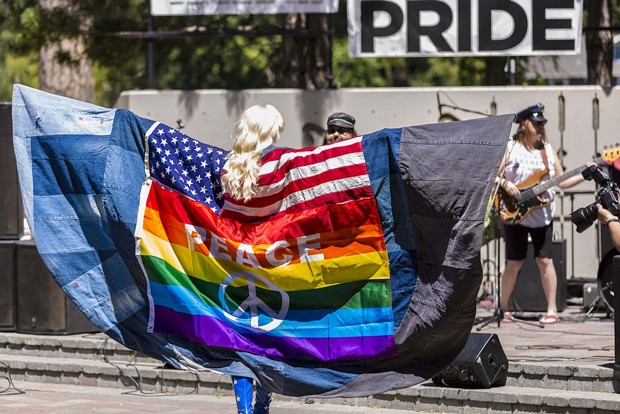 Central Oregon Pride, hosted by the Human Dignity Coalition, will host a variety of vendors and entertainment in Drake Park, including appearances by exotic dancer Eddie Danger, drag queens Ivanaha Fusionn and Axel Andrew—and Pandora Boxx, who has appeared on the popular show "RuPaul's Drag Race." There will be kid and teen-friendly entertainment, from bounce houses to games, in addition to a lounge area for ages 21+.

Melissa Adams, a mental health therapist serving Central Oregon, and six other officiants will be offering free wedding ceremonies at Central Oregon Pride this year, in the theme of, "My Big Fat Gay (+) Wedding." Those wishing to be married need to bring a Deschutes County marriage license to the event. All donations will benefit the Human Dignity Coalition.

The main Pride event on June 22 isn't the only exciting event happening this month. OUT Central Oregon has really ramped up its events, including a kickoff party on June 20 at Crater Lake Spirits, another edition of drag bingo at Silver Moon Brewing on June 21, the first Bend Pride Fun Run & Walk on the morning of June 22 and a Pride edition of the popular Hey Honey queer dance parties that night, following the Pride event in Drake Park.

Jamie Nesbitt, president of OUT Central Oregon, says the group just held its first Golf Pride Day at Juniper Ridge Golf Course on June 8. The group looks forward to seeing that event grow in the coming years. OUT Central Oregon is also organizing a panel discussion June 19 in conjunction with the Bend Chamber of Commerce and The Haven—a new coworking space with a mission to help Central Oregon reach gender parity in business and politics—on the topic of creating an inclusive workplace for LGTBQ+ employees. Nesbitt says he already had a dry run with an event he held at the Oregon Department of Transportation last week.

"Myself and one of my other board members went and spoke to a crowd of about 45 people at ODOT—just about beginning to think about what they want to do as far as their diversity and sensitivity issues," said Nesbitt. "It went over really, really well. They said it was the most interactive ones they've ever had."