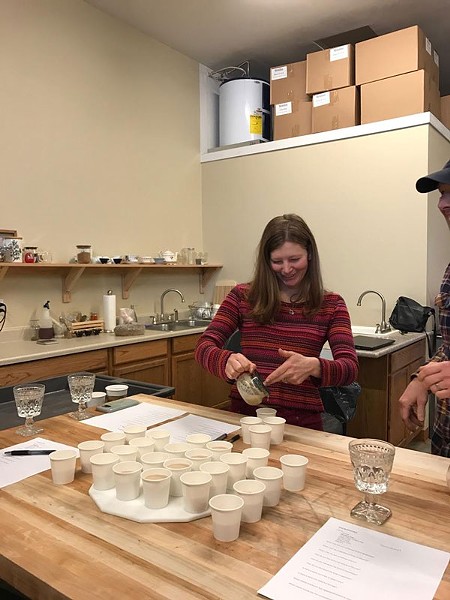 Sugar and spice and everything nice.

That's not referring to little girls, but instead refers to chai, the sweet, warm, spicy tea you find in many coffee houses. The word itself means "tea," so calling it chai tea is a little redundant. If you were trying to be accurate, you'd call it the proper Indian name: masala chai.

Chai is a tradition born from the English colonization of India. In the 1830s, when the East India Company was rapidly colonizing India, they created a campaign to convert Indians to tea drinkers. The Indian people adopted tea but made it their own by adding fresh ginger, cardamom, milk and sugar to the brew–a style of which the English originally disapproved. Even though chai has been popular in India for hundreds of years, it didn't become popular in the U.S. until the mid 1990s.

It makes sense; can you imagine a professional rushing to work and waiting 10 minutes for a cup of chai? No, neither can I. tweet this

Chai is traditionally brewed, but the majority of American coffee houses use liquid or powdered concentrates for convenience. It makes sense; can you imagine a professional rushing to work and waiting 10 minutes for a cup of chai? No, neither can I.

When I've had a really good chai, I can't stop thinking about it. The same thing happens to me with really good curry. Certain mixtures of spices leave me with an addictive flavor memory. I think herbalist turned tea maker, Amy Lee Stahl, the owner of Metolius Teas, can relate. She spent a year developing a chai because she says there was "no chai on the market that fulfilled my imagination of what a chai should be." She set out to make "her dream of chai in real life." During Stahl's year of development, she blind-tasted local and national chais and took notes on each. She found most to be watery and clove-forward. Stahl wanted her chai to have more flavor with stronger fresh ginger and cardamom notes, like a real Indian masala chai.

Stahl says it was an "epic journey" to make the new Metolius Tea chai.

"I've never worked harder on anything," she said.

The epic journey took her into unchartered waters. She's been blending loose leaf teas for her company since 2010 but there was no method to follow to make a chai concentrate, because no one was doing what she wanted to do. She came close to creating the chai she wanted half a dozen times, only to scrap it and redesign the recipe with a completely different methodology. Cardamom's aromatic oils are highly volatile and do not infuse well in water.  That's where chaiwallas (Indian street chai makers) have a huge advantage, steeping their spices directly in high-fat milk, capturing the cardamom's delicious flavor. Stahl would sneak out of bed in the middle of the night to research solubility chemistry, volatile oils and protease in fresh ginger to figure out how to make the most flavorful chai possible.

Eventually came the chai of her dreams—coming, fittingly for a Central Oregonian, by using beer brewing equipment.

The process to make one batch of Metolius Tea chai takes 15 hours. When Stahl gave me a sample of the dreamy, organic chai, the first thing I noticed was how concentrated it was. You only need 1 ounce to make a cup, so you can use more milk, resulting in a richer chai. Most concentrates are 4 ounces of watery chai concentrate to 4 ounces of milk.

Stahl told me the best way to make chai is with an electric frother. I only had a manual milk frother that came with my manual espresso maker. I warmed milk in a small saucepan and hand pumped the liquid until a thick layer of bubbles formed on top. I poured the steamed milk into the chai concentrate and held the mug under my nose. It was sweet and spicy, reminiscent of a Sparrow Bakery Ocean Roll but with a bigger punch. The first sip started sweet and ended smooth and spicy. With the second sip I relished in its creamy lusciousness.

I spent the rest of my day thinking about that warm cup. By dinner I tried the concentrate in a cocktail with whiskey and a splash of half and half. The next morning I used what was left to make a dirty chai by adding it to my coffee. Hooked!