No one is safe in the "Triangle of Sadness"

Hollywood has been making films about the gulf between the haves and the have-lesses since long before I was born, and it's probably getting more difficult for filmmakers to mine anything new from the subject. Considering that the gulf has only gotten larger as time goes on and that the tech boom has only exacerbated that divide, when a truly great writer finds something un-tapped and modern in the subject, it can almost feel like an entirely new genre. 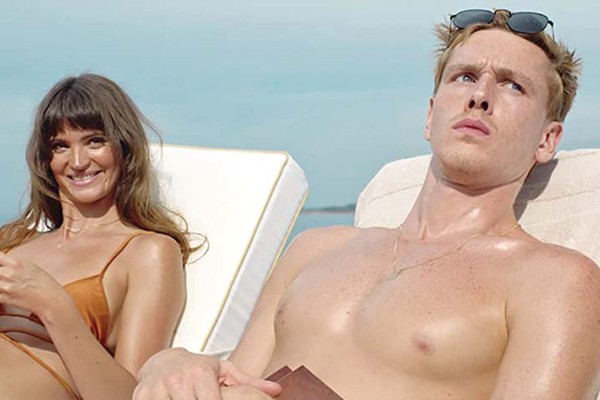 Swedish writer/director Ruben Östlund is behind two of the finest deconstructions of class, art and humanity of the last decade with 2014's "Force Majeure" and 2017's "The Square," so when his newest work, "Triangle of Sadness," won the Palme d'Or (his second after "The Square") at the 2022 Cannes Film Festival, I knew he had another masterwork on his hands. And while "Triangle" is quite great, it doesn't reach the same surgically incisive levels as his earlier films.

The film is told in three parts, with the first introducing us to the two main characters, Carl (a fantastic Harris Dickinson) and Yaya (a revelatory Charlbi Dean, who sadly passed away in August), a pair of models who are dating mostly to increase their social media followers. We meet them right before they get into a flawlessly written fight in a boujee restaurant over gender roles and paying the check.

The second part takes Karl and Yaya on board a luxurious cruise ship (free with their influencer bonafides), where they meet the drunken socialist captain of the ship (played by Woody Harrelson, clearly having the time of his life), a Reagan-obsessed Russian oligarch, an elderly British couple made wealthy by arms dealing and several harried employees of the cruise line.

The third section is on a deserted island, where only some of those characters have survived after a combination of sea sickness, pirates and stupidity has destroyed the ship. This chapter should have been the strongest of the three and it's easily the weakest.

Those aren't really spoilers, as the trailers show that much and more, plus the real fun of the film is getting to know the characters and then watching them slowly submit to things they can't control with wealth or privilege. The metaphor of the super-rich being repulsive and awful and getting their comeuppance is pretty on the nose, but so hilariously and clinically observed that I can't fault Östlund for his less-subtle-than-usual approach to roasting them.

"Triangle of Sadness" exists primarily as a comedy and some of its jokes are telegraphed in ways that the ultimate darkness of the third act struggles to reconcile with, even as it somehow manages to wring belly laughs between moments of genuinely disgusting imagery. Yes, the metaphor of an obscenely rich woman pounding champagne as she tries to calm her sea-sickness, only to projectile vomit it everywhere, is delicious, but doesn't carry much more depth than that.

There are moments in the film that had me laughing harder than anything I've seen all year, so I'm not sure why I don't feel as in love with "Triangle" as I do with Östlund's other work. But expectations as high as mine really couldn't have been reached. The bluntness of "Triangle" works as more of a primal scream of anger than it does as a blistering satire, and Östlund's rage and disgust is visible in almost every frame.

There's also an element of bread and circuses when decent-sized studios release a movie budgeted at over $15 million that skewers the wealth that filmmakers and artists desperately need to get something made in the first place. I think of how chewy the irony must have been at Cannes when the rich and beautiful sipped their champagne while the characters in "Triangle" violently eject it. Are we not entertained?