Citing an increasing number of comments from concerned citizens, the Bend City Council voted 4-2 last Wednesday to amend the parking code to shorten the time people can park cars on public right-of-way. The vote changes the maximum from five calendar days to three business days. 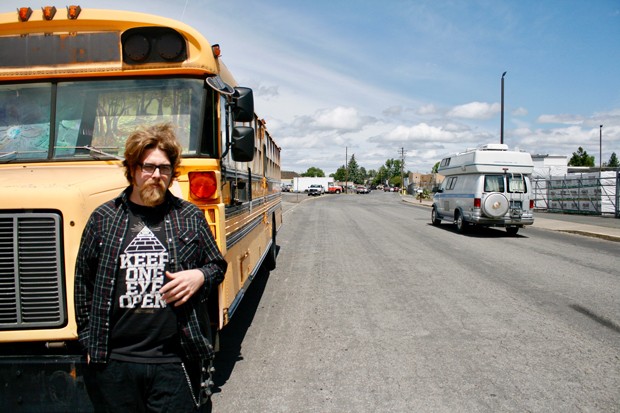 According to the language of the ordinance, it's intended to increase parking turnover, and to respond to concerns from people about the amount of time that passes between a report of a potential parking violation and vehicle towing.

Councilor Bruce Abernethy said during the meeting that he supports the move and proposed the possibility of a sliding-scale fine for repeat offenders.

"We need to send a message that we're doing something," Abernethy said.

When a parked vehicle is reported to the Bend Police Department, one of six volunteers responds to the complaint, says Anne Aurand, City of Bend communications director. Volunteers issue a notice to the vehicle in question, and the team comes back to confirm the vehicle hasn't moved within the three business days. Then it's subject to impound.

“You never really know what you’re going to encounter. You can go out in the morning to walk the dog, and there’s a guy peeing.” —Dara Robertson tweet this

Living across from a school bus

For people who live in neighborhoods where people frequently live in their cars, the change is a step in the right direction.

"You never really know what you're going to encounter," says Dara Robertson, who lives across from Juniper Park on Bend's east side. "You can go out in the morning to walk the dog, and there's a guy peeing."

Robertson said people have pulled all of their belongings out of their vehicles and dumped them on her property. She's had someone leave a drawing of her home on the front porch. She's repeatedly called the police hotline about cars that stay too long—in addition to confronting people living across the street from her living room windows.

"We can't open the windows because I'm looking at this giant school bus," Robertson said.

Robertson said she understands there's an issue with housing in Bend and that the problem of people camping on her street lessens when the weather warms.

"We're compassionate, heartfelt people," Robertson said. "I understand the reason a lot of these folks do it, but after the four or fifth time of talking to people, I'm the one who feels like an a-hole. I pay taxes, I put in a $2,500 sidewalk for the City."

According to Aurand, City code contains language prohibiting camping in "public parks and other City property." However, federal and state courts make it difficult for local governments to enforce those regulations against homeless people in parks and public rights-of-way. Attempts to define what it means to camp are often subject to costly legal challenges.

"Being homeless is obviously not a crime," Aurand wrote in an email to the Source. "Beyond that, federal and state courts are increasingly skeptical of laws and regulations that may affect or have a disproportionate impact on individuals because of their status, including the status of being homeless."

Aurand said the courts have restricted the authority of local governments to enforce regulations that prohibit camping or otherwise restrict the use of public spaces, because these regulations often have a disproportionate impact on homeless people, even if the regulations are not expressly targeted at any group of people.

Living in a school bus

Zack Polton moved to Bend from Iowa in 2018 and has been working at Barrio in downtown Bend since September 2018. Polton bought an old school bus in January and has called it home since. Polton said housing in Bend is unaffordable even for people who are working—unless you live on the outskirts, which raises transportation costs, making it still unaffordable.

Polton invited me and Source intern Bron Wickum into his bus, currently parked on the east side of Bend. The bus has been modified slightly to include a bed, food storage and window coverings. Polton said he planned on more modifications, and hopes to sell the bus in the future to another person looking for a home on wheels.

According to Polton, RV parks won't take busses and are out of his budget at $700 to $800 a month. He also said that many people who are living out of their cars—or buses—don't park on the west side because the neighborhoods gang up to complain about parked motorhomes or vehicles. Police respond quicker and make people move immediately, Polton alleged.

"Whether it's the west side, north side, south side, it doesn't matter, you're going to find areas where people are parking for extended periods of time on public streets," Burleigh told the Source. "We take every vehicle involved the same so that when complaints come in, we're being consistent as much as we can."

Robertson said her neighbors have taken to naming the conversion vans. One, that they often see outside their home they've named "The Cobra," as a way to lighten the situation.

"I get it. There's nowhere to live in this town," Robertson said. "It's expensive."