In Central Oregon, nearly any time is a good time for a climb

Usually this is a strange time of year for the rock-climber population. It's still pretty cold out, and often, there's that pesky snow and ice to deal with.

But this year? Winter has almost been too ideal for climbers. 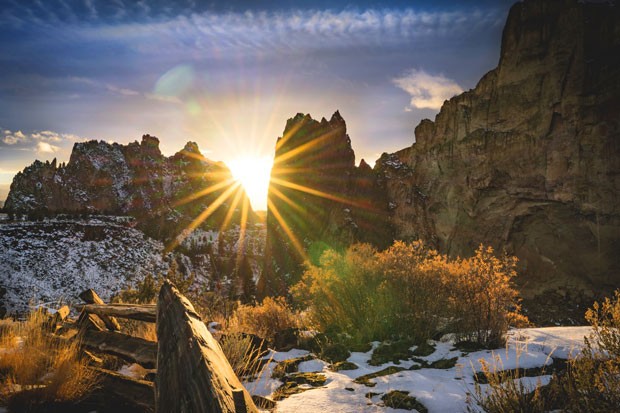 "We've been lucky with a winter like this. This winter has been prime conditions," says Mike Rougeux, climbing director with the Bend Endurance Academy. "Even today, you might want to go to more shadier spots than sit in the sun."

Places like Smith Rock State Park—the birthplace of American sport climbing—are at a good position and temperature in late winter, and Rougeux says even many of the bouldering spots around Bend have been pretty climbable as well.

But if there was a winter like last year's, when feet of snow dropped late in the season, what practices do climbers follow to still be on their game? While it might seem obvious, the team at Bend Rock Gym says the first rule of winter rock climbing is to travel somewhere warm. Numb hands and feet don't typically make for fun climbing, so if traveling to a warmer climate isn't an option, they advise bringing loads of insulating layers and hand warmers.

The big shiny thing in the sky is a climber's best friend—so follow it. You typically don't want to be somewhere that the sun can't hit, or a place where it won't be at very long. Ideally climbers will be able to maintain good body heat, and the sun will give that a little boost while heating up the rock face as well.

"I'm not saying this just because we live in Bend, but you have to have a puffy," laughs Rougeux. "You don't want to re-warm up every time if you're belaying. You want to maintain blood flow and body heat."

So a killer puffy jacket, solid layers, and even hand warmers can become crucial for a winter climb. Rougeux tells me that some people will even bring out a small propane heater to have at the base of the rock. Black Diamond also makes a chalk bag that has battery-powered heat to take on the climb. And as long as it's sunny and not windy, with weather like Central Oregon has been enjoying this week, climbers should be in the clear.

For beginning climbers who are looking to still keep practicing year-round but aren't winter-climb savvy, the Bend Rock Gym will be emptier than usual this time of the year as the experienced climbers will be outside with the nice weather. But if you are looking to get out when it's a bit colder, be sure to keep those extremities warm.

"If you can get to a position and shake out, put a hand on the back of your neck. The body tends to keep all of the main organs warmer than your hands," says Rougeux. "Even just shaking out your arms and hands, because most of the time they're above your chest. This helps increase blood flow."