Chicago's Out to Blow the Roof Off | Sound Stories & Interviews | Bend | The Source Weekly - Bend, Oregon

Chicago's Out to Blow the Roof Off

Chicago was my very first rock 'n' roll concert, on March 14, 1971, at the Tulsa Assembly Center, and it was cathartic. We were juniors in high school, just shy of driving privileges, so my dad drove a buddy and me down to T-Town from Independence, Kansas. Dad was a great sport, willing to hang out on his own and wait for us.

In those days, if you didn't live close enough to get to the box office, you had to write a check and send it off, just hoping you got decent seats. I mail-ordered the tickets weeks in advance, but we still ended high up in Section 207, looking practically straight down onto the stage from our lofty perch. (I still have the ticket stub in my concert ticket scrapbook.) 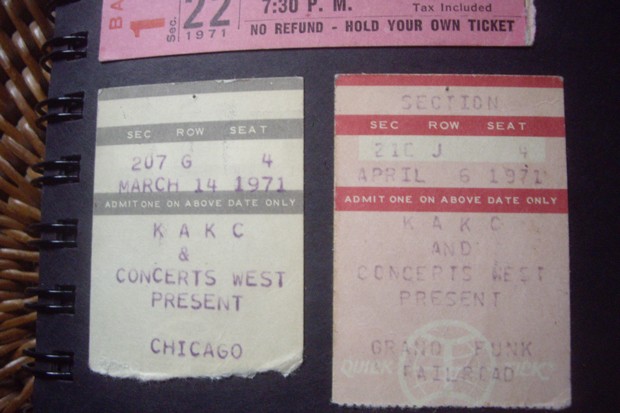 In the weeks leading up to the Sunday night concert, I don't know how many times I opened up the little paper envelope with radio station advertising on it, just to hold and look at the magic ducats. That it was on a school night made it all the more daring, reckless and fun. Chicago was the first rock band with horns, and they kicked ass.

What goes around, comes around.

Chicago brings its current edition of the band to kick it at the Athletic Club of Bend Aug. 31. My dream set list would include songs from only the band's first three albums. After that, the band changed and so did I, moving on to the Rolling Stones. Chicago eased into more of an easy-listening groove while releasing a string of Top 40 pop hits. I can easily live with never hearing "Saturday in the Park" ever again, but I know they're going to play it. C'mon Chicago, "Make Me Smile." Play "I'm A Man," "25 Or 6 To 4," "Free," "Lowdown" and all the regular hits.

Most classic bands still touring today might have one, perhaps two, original members, tops. Chicago is doing well to still have three of the band's seven founding members. Keyboardist and vocalist Robert Lamm is still at it, while Lee Loughnane and James Pankow blow trumpet and trombone, respectively.

Chicago was the first rock band with horns, and they kicked ass. tweet this

The band has had about 30 different players over the years. One of them was a kid I didn't know but went to school with in junior high (yes, I'm that old!) in Manhattan, Kansas. Dawayne Bailey wrote songs and sang and played lead guitar in the band from '86 to '95. Before that, he toured and recorded with Bob Seeger and the Silver Bullet Band. I remember there was a junior high assembly in 8th grade and Bailey and his three-piece power trio of buddies (Cream was all the rage at the time) played two rock songs that were popular at the time: the Vanilla Fudge version of "You Keep Me Hanging On" and the Doors' song, "Touch Me." It was the first time in my life that I heard rock 'n' roll music played live.

Today's version of Chicago is a 10-piece outfit. The band's current tour kicks off Aug. 22 in Colorado Springs and hits Boise and Salem before coming to Bend. Chicago will play 51 dates all around the country before wrapping up Dec. 18 in Biloxi, Mississippi.

After that 1971 indoctrination into the world of rock 'n' roll concerts, I would see Chicago a couple more times in Tulsa. One time, they even had one of the first all-female rock bands, Fanny, open for them. My buddy and I lucked out with seats down close. When Fanny played its version of "Badge" (again, that Cream thing), it had us jumping up and down.

But that still paled in comparison to looking up at the late, great Chicago guitarist/vocalist Terry Kath, and watching him lead the band through its killer set. He was a monster guitar player and croaked out husky lead vocals. Tragically, Kath died in January 1978 from an unintentional self-inflicted gunshot wound to the head. I remember hearing the sad news on my car radio, parked in a foggy parking lot outside New Orleans. It was a bummer way to start the day.

To acquaint yourself with the current band and news, go to the band's website, chicagotheband.com. Click on "A Chicago Story" to read a book-length treatise on the band's history. Who knew that in the summer of 1969, former bassist/lead singer Peter Cetera had his jaw broken in three different places during a baseball game in Dodgers Stadium, when four Marines set upon him for being a "long-haired rock 'n' roller in a baseball park," Cetera reports. With his jaw wired together, he had to go back on tour and sing through a clenched jaw, which he says, "is still the way I sing."

In 1971, Chicago became the first non-classical group to play a multi-night stand at historic Carnegie Hall in New York City. The band recorded all eight shows and released a live four-record box set, a feat unheard of at the time. I couldn't wait to get my hands on it and I still have the vinyl. Earlier this summer the band released a deluxe 50th anniversary 16-CD set featuring all eight concerts.

That's what I call some Chicago deep dish.