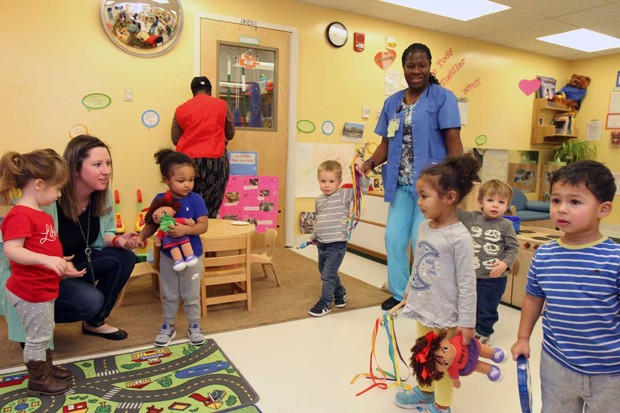 "Most of the United States, so even beyond our regional realities, is struggling," said Megan Pratt, an assistant professor at OSU and the lead author of the study. "What's really clear is that two thirds of families of children under age five in our state don't have available care, and this has stayed consistent. It'll be interesting to see where we're at, we'll be looking at this next after the pandemic, because what a lot of times happens is, when there's no childcare, is mom stays home."

The shortage of available care can lead to years-long waiting lists for children to get enrolled in preschool. Under these circumstances, some parents feel child care centers take advantage of the shortage by charging more for less. During closures from COVID exposures, several parents who spoke to the Source reported they continued to pay full price despite their preschool's lack of service.

"From the second you get a positive pregnancy test, you have to get on the waitlist and then you have to call every single month to be sure that you could even get your child a spot," said a Bend mother who asked to remain anonymous. "That's why they can do what they do with their prices, when you wait over a year to get childcare that you could barely get to begin with, you're going to do what you have to do, even if it's paying $850 a month to hold a spot that never comes."

Some parents said they've had to take leave from work several times over the pandemic to cover for child care they still paid for. Others complained that little was done to inform parents how long the closure would last, and that some facilities didn't do enough to contain outbreaks.

"I had zero confidence in their ability to manage it. They would say one thing while doing another," a parent said. "You were going to have stations for hand washing set up, so every person who comes to the facility will wash hands, and then you go in, there's nothing like that set up."

The issue of cost can to some extent be attributed to the high cost of staffing a child care center. Pratt said 72% of the child care system is funded by parents, and about 80% of revenue goes toward staffing. The reliance on funding from parents leaves few options when a closure happens.

"These programs are running on incredibly slim margins, and that's because to provide safe, healthy care you can't have more than four babies for each teacher or single adults, so you have to maintain these ratios," Pratt said. "So it takes more money than typically most parents are able to truly afford to do it and then be able to withstand a closure for two weeks, or withstand any sort of hiccups."

Compounding this is the industry's difficulties retaining and hiring enough staff to meet demand. A survey of 7,500 early child care providers over the summer from the National Association for the Education of Young Children found that more than half of the respondents said they had a harder time staffing than they did prior to the pandemic. Eighty percent of center-based providers experienced a staffing shortage, where at least one open role was unfilled for more than a month.

As a result, over 50% of centers said they were serving fewer students, a third had longer waitlists or were unable to reopen all classes and a quarter had to reduce operating hours. The largest barrier to getting new employees is the industry's low wages for teachers. Seventy-eight percent of NAEYC's respondents cited low pay as the largest barrier to attracting new employees, and 81% cited pay as the main reason educators are leaving.

"It's one of the lowest-paid professions in our country, and the pandemic has shown a really central piece of our economic infrastructure," Pratt said.

Low-income families more often rely one parent or a family member for child care, while families most able to weather a challenging child care situation are the ones with financial, community and professional privileges.

"The families that are faring better than others are those that have the backup resources. They have grandma, they have the extra funds where they can keep paying tuition and then also pay someone else to watch their kid, they have a flexible job, where you can say, 'I guess I'm working from home today, or for the next two weeks,'" Pratt said.

There's been effort to address a lack of child care in Central Oregon. In October, 2021, the Deschutes County Commission allocated $6.6 million in American Rescue Plan Act funding to help create 500 new child care spots and 275 new workers. One of the Bend City Council's economic vitality goals from 2019-2021 was to increase available childcare slots by 20%, and on Dec. 2, 2020, it voted to exempt child care providers from transportation system development charges until December 2022.